The 29th Anniversary Cesar Chavez celebration is on Saturday, April 9, 2022 in San Francisco. Highlights for the day include a parade and street fair in SF's Mission District.

This annual festival commemorates the life and work of the labor and civil rights leader, Cesar E. Chavez. 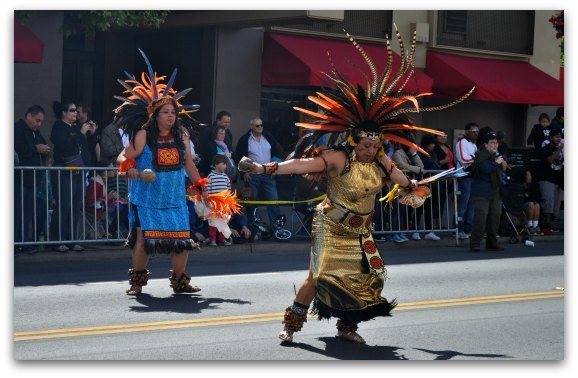 Early on in life, Chavez noticed unfair work practices for farmer and migrant workers. As he grew up, he knew he wanted to do something about it.

In 1962, he founded the National Farm Workers Association (later known as the United Farm Workers or UFW). With this union, workers had support in the fight to improve their working conditions.

The union grew slowly at first. However, with Chavez's tireless leadership, the union grew to more than 50,000 members by 1970. It's still one of the most active unions today.

The parade for the Cesar Chavez Holiday Festival assembles at 10 am in Dolores Park at 19th and Dolores Streets, and officially kicks off at 11 am.

The parade makes it way from Dolores Park to the street fair in the heart of the Mission at 24th Street and Folsom/Bryant Streets.

This year's street fair is from 11 am to 6 pm. All activities will take place on 24th Street between Treat and Bryant.

Dozens of artists will display their unique pieces as well throughout the festival.

If you love classic cars, make sure to stop by this year's Classic Car Show on Harrison Street at 24th.

Entry to the festival is free.

Getting to the Parade & Festival

It's easy to get to SF's Mission District. Here are your best options:

ere are some tips for those coming from outside SF:

Parking Options for Those Driving

If you decide to drive, you might get lucky and find street parking in this district on a Saturday afternoon. However, you will most likely need to park your car in a garage.

Click here for some of the best places to park in SF's Mission District.

If you are interested in staying near the festival, you will find a few nice lodging options right in the Mission. Many are smaller boutique hotels and bed and breakfasts.

Other SF Festivals and Street Fairs: Each weekend in SF, you will find a fun festival or street fair. They range from the Cesar Chavez Holiday Festival to the large North Beach Street Fair in June. Click the link above for this year's schedule.

Mission San Francisco de Asis: The oldest building in San Francisco stands on the western side of the Mission District. If you have an extra hour or so before the festival, I recommend stopping by for a visit. This mission was built in the late 1700s and is a gorgeous display of California's famous missions.