Every year, San Francisco is home to one of the largest Saint Patrick's Day celebrations in the world. The parade draws more than 100,000 people.

This year's block party is on March 12. Details for this will be announced soon.

The parade starts at 2nd and Market Street, then makes its way down Market to the Civic Center Plaza, the location of the festival. Below, you'll see the route they usually follow for the parade.

The parade starts around 11:30 am and lasts about two hours. There is usually plenty of room to see the parade clearly along Market Street, but it gets more crowded the closer you get to Civic Center Plaza. 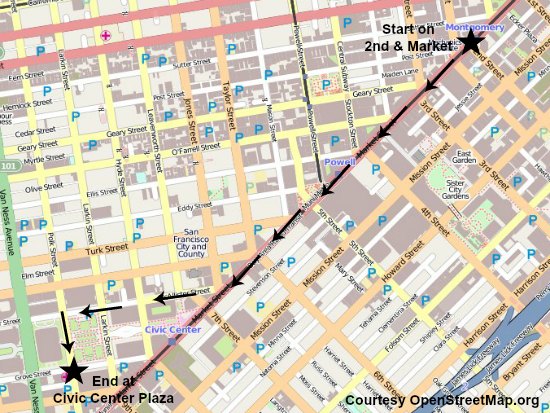 Insider's Tip: If you are watching the parade with your kids, I recommend finding a spot around Market and McAllister. This is where the parade route turns to head to Civic Center. There is usually plenty of room here, so you don't have to fight the crowds to get a good look.

Here are just a few of pictures from previous years. 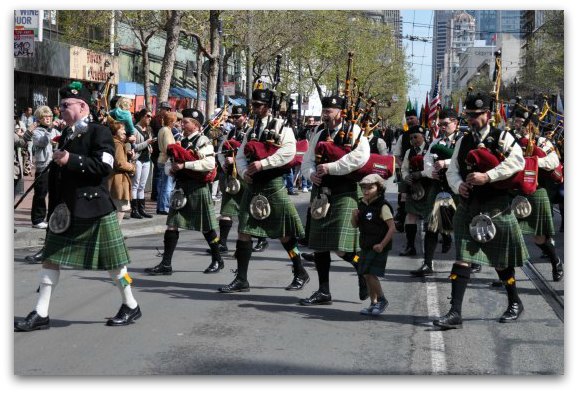 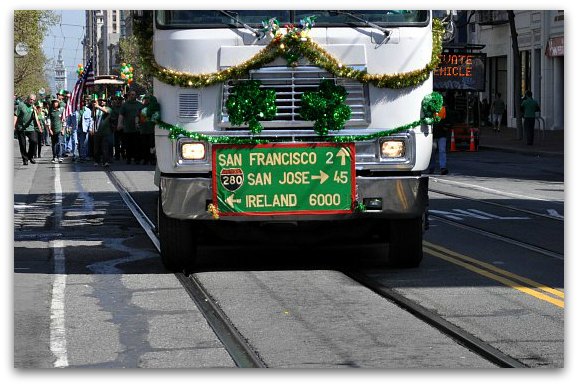 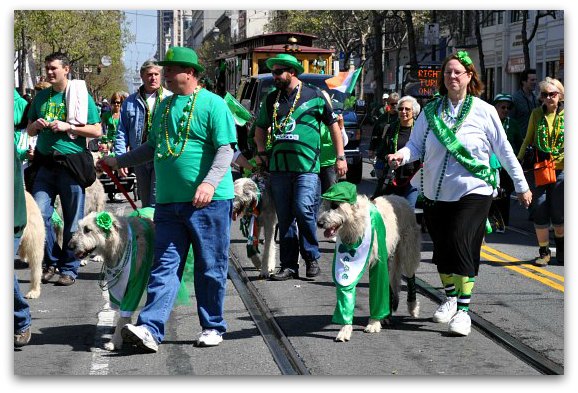 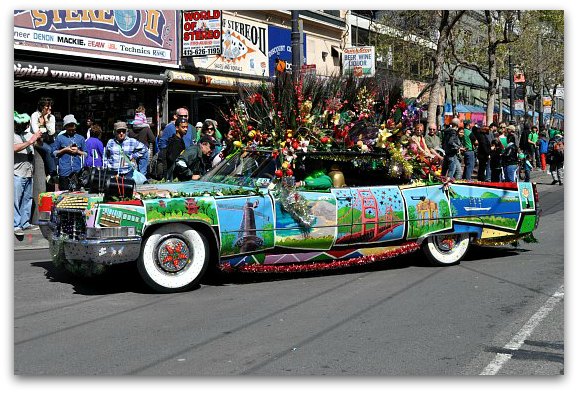 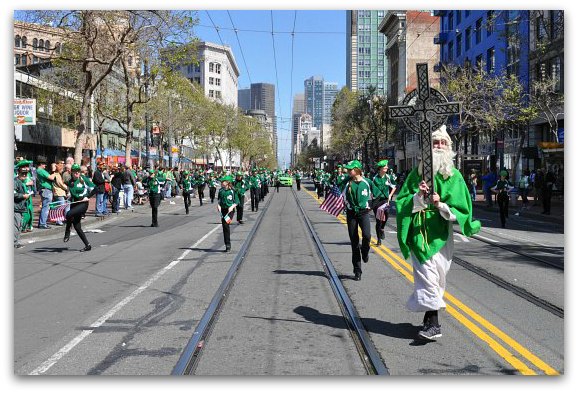 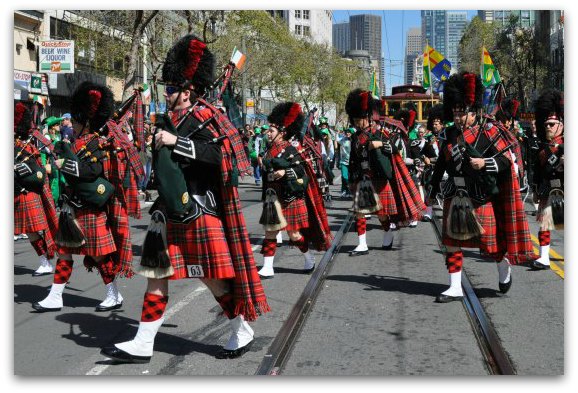 This year's festival will be on Sunday, March 12. All details below are about earlier festivals and I'll update it once they announce the plans for this year.

At the end of the parade route is the annual Irish Festival, which starts around 10 am and lasts until 5 pm. The festival is for all ages.

The main festival area is where you will find the food, beer, and live bands. Everyone is welcome to enjoy this area, but you will have to go through security to enter. 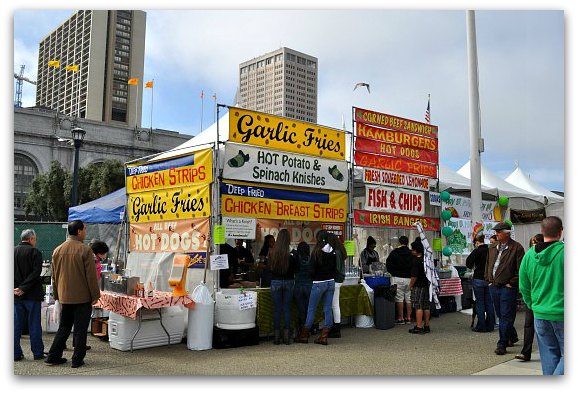 At this festival, the beer is also flowing. The beer booths have three options: a lighter beer, Guinness, and Irish Coffee. The lines are long, but you usually don't have to wait too long. 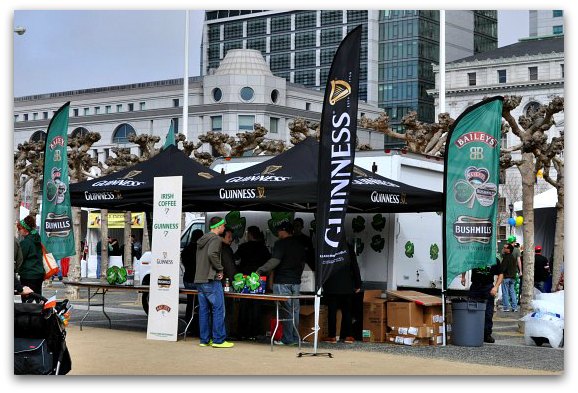 Outside food and drinks are not allowed inside the food area. They are strict on this and will not let you into this area if you have any food or drink with you.

There is one main stage at the festival where different Irish bands play all day long. 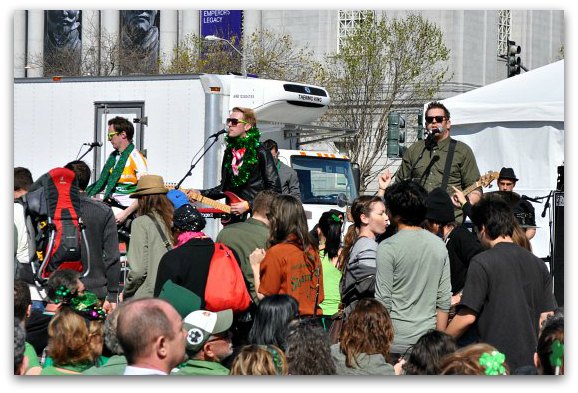 Kids' Area at the Festival

There is another part of the festival just for children. This area includes games, candy, and other fun kid-friendly activities. 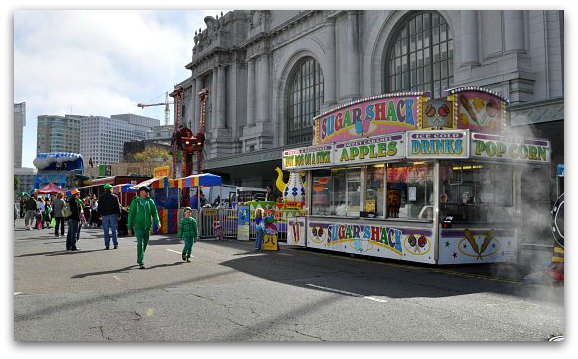 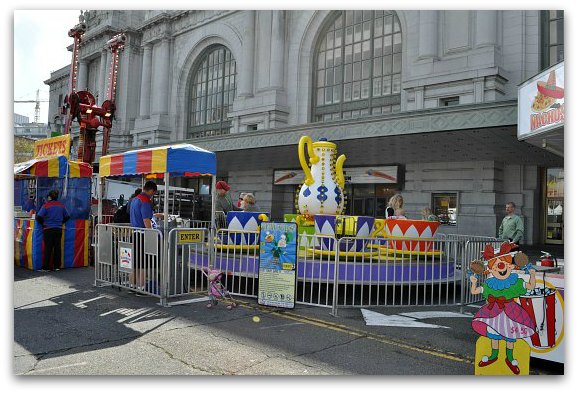 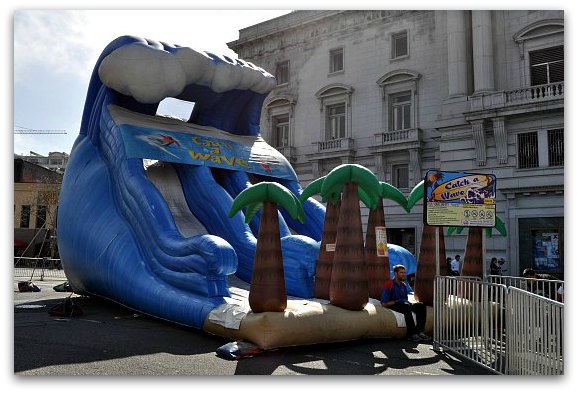 You will find the kids' activities and rides on Grove Street, which is south of Civic Center Plaza. You do not need to go through security to get to this point.

Keep in mind that although the parade and festival are family friendly, St. Paddy's Day does get a little crazy later in the afternoon.

I like to leave the festival no later than 4pm, so I can catch the bus or train to another neighborhood. This way I don't have to share too much space with those who've had a little too much to drink.

Cherry Blossom Festival: One of the largest festivals every year is the spring Cherry Blossom Festival. Every April, when the cherry blossoms are in bloom, it's time to celebrate. Over two weekends, the Japantown district comes to life with music, traditional Japanese cuisine, and more. This is one festival you don't want to miss!

Annual Wine Tasting Festivals: Since we are so close to Northern California wine country, SF is often selected for large wine tasting events. Every year, you can sample zinfandel at the ZAP Festival, raise your glass of pinot at Pinot Days, and spice things up with tempranillo and other Spanish varieties at the TAP festival.

All Festivals & Street Fairs: You will find dozens of festivals and street fairs in SF all year long. Some of the most popular include the Pride Festival in June, the Fillmore Jazz Festival in July, and the Stern Grove Festival which lasts all summer long.