Fleet Week San Francisco is an annual event that draws thousands of people into the city. It's a free event in the Fisherman's Wharf district that features the Blue Angels, a full air show over the SF Bay, and ship tours all weekend long.

This year, Fleet Week is October 3 - 11, 2022. Most activities and the large air show are over the weekend of October 7 - 9. You will find additional ship tours throughout the week.

It began in 1981 to honor the US Armed Forces and to educate civilians and military personnel about best practices in humanitarian assistance. It's held every year in San Francisco on the first or second weekend in October.

The US Navy Blue Angels are set to perform on Friday, Saturday, and Sunday (October 7, 8, & 9) afternoon from 3 pm to 4 pm. They will usually do some practice runs on Thursday afternoon also. 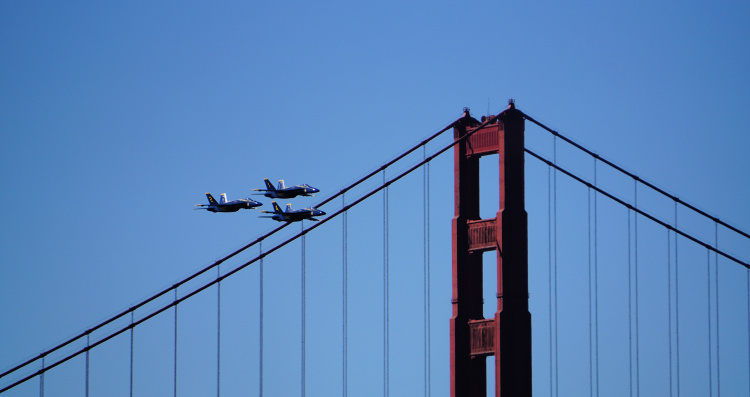 You can also enjoy the Parade of Ships on Friday or head out on a cruise to watch the Blue Angels perform from the water. 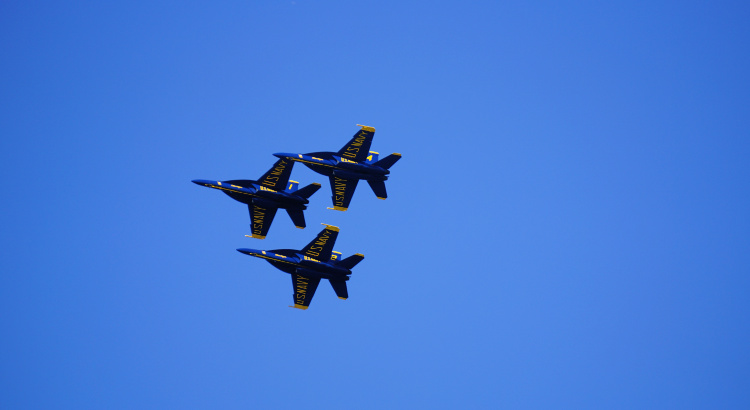 Almost all of the Fleet Week San Francisco activities are along the northern waterfront district of Fisherman's Wharf. This week's schedule of events includes the airshow featuring the Blue Angels, ship tours, live music and other entertainment all weekend long.

*Schedule of events is subject to change at anytime. 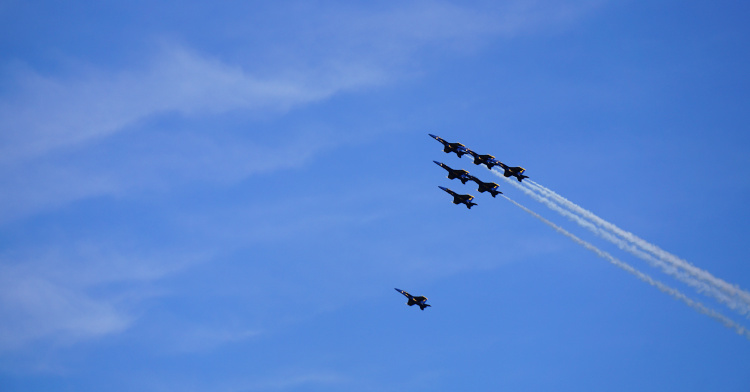 One of the best ways to watch the Blue Angels fly over the San Francisco Bay is from a special Fleet Week cruise. These sell out quickly, so I recommend booking your cruise as soon as you have your plans finalized.

Cruise on the SS Jeremiah O'Brien

Additional Activities: Are you looking for some additional fun activities for your visit? Check out my list of the best things to do in October. You will also find a lot of free attractions and activities this month all around SF.

Best Places to Watch the Air Show & the Blue Angels

The northern side of San Francisco along the bay is CROWDED during the air show. If you want to sit down, you will need to arrive at least an hour before the Blue Angels perform.

Most of the Air Show takes place over the bay, around Fisherman's Wharf and Fort Mason.

Here are a few places to watch the Air Show with some additional notes to think about for each option:

Pier 39: You will be close to the action, but it gets really crowded here. However, it's a great place to see most of the show. Try to find a spot with a clear view of the Golden Gate Bridge.

Aquatic Park: There is a small stadium here with seats facing out over the bay. You will get a great view of the Fleet Week San Francisco Air Show from here, although the maneuvers over the Golden Gate Bridge will be harder to see.

Crissy Field: There will be fewer people on this side, which makes it a nicer viewing area. This is a great place to see the Blue Angels maneuvers near the bridge. It is a little further away from the main action though, so the trees may block out a little bit of the show.

Marina Green: Just to the east of Crissy Field is the Marina Green. This large green space offers a great look at the air show. You can also buy premium tickets for this area so you don't have to fight for a place to watch the fun. Tickets for the premium section are already on sale. You will find them on the official Fleet Week website.

Marin Headlands: Another great place is the Marin Headlands. You will see the airshow, but the biggest benefit to this location is being able to see the Blue Angels near the Golden Gate Bridge.

Again, these are not the best spots for the Fleet Week San Francisco airshow, but some alternative to watching it from the shore along Fisherman's Wharf.

More Things to Do this Weekend in San Francisco

These are some of the other fun things to do during Fleet Week San Francisco or as you are waiting for the big airshow to begin.

Catch a theater performance during your time in San Francisco. Every year, the Golden Gate and Orpheum Theaters welcome hit Broadway musicals. In addition, smaller theater companies perform at a variety of venues all over town.

Every day of the week, SF City Guides offers free walking tours in different districts all over town. Learn more about the Golden Gate Bridge, Union Square, the Palace of Fine Arts, and more.

If you love to listen to live music, then you will find plenty of options this weekend in SF. We have venues large and small with everything from well known artists to popular local bands.

>> Click here for a full schedule of concerts this weekend

Additional Fun Tours to Check Out

Since more than a million people attend Fleet Week San Francisco each year, I highly recommend booking your hotels early.

Note: Most hotels will not guarantee that you will get a waterfront room to see the show from your room. Plus, you won't get great views of most of the show so I recommend heading outside to watch it.

All events are in Fisherman's Wharf and it's a great place to stay. You can easily walk to and from your hotel to see the shows and enjoy all of the activities.

Here are a few recommendations in this San Francisco neighborhood. 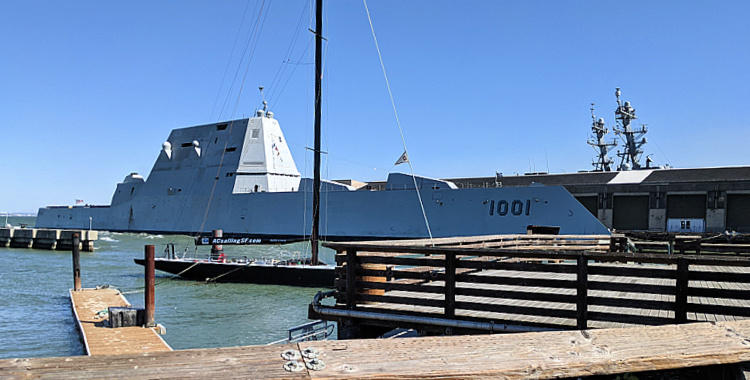 The Fleet Week San Francisco ship tours are wildly popular. All tours are free, and they encourage you to interact with the sailors on board. I recommend showing up well before they open their doors, as it's first come, first served and the lines get long fast.

More Pictures and What to Expect in 2022

Below are a few of my photos from previous years for each activity. They will give you an idea of what to expect this year.

The Parade of Ships is the official start of the Fleet Week San Francisco celebrations. All of the ships for the event come in under the Golden Gate Bridge and head to their designated pier in San Francisco. You can tour all of these ships during the three-day celebration.

A couple of years ago, my mom, sister, and I were on Alcatraz Island during the Parade of Ships, which is one of the best places to be for this event. Here are just some of my pictures from that day. 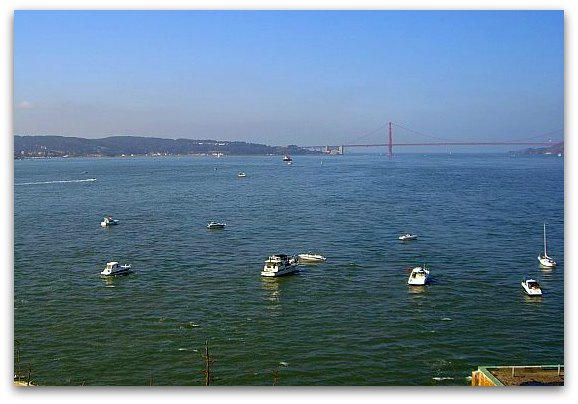 The Parade of Ships is about ready to begin. The boats at the bottom of the picture are all waiting for the parade to start. In the background is the Golden Gate Bridge, which is where all the boats enter the San Francisco Bay for the event. 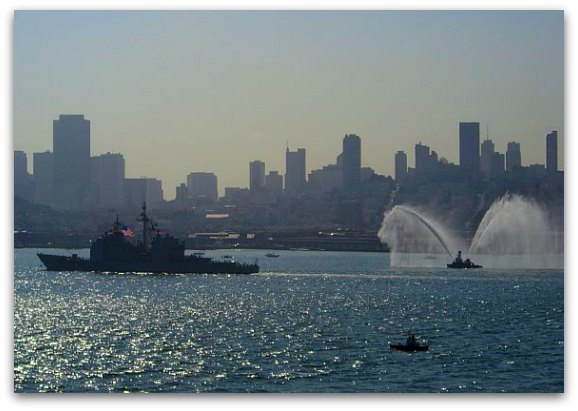 This is one of the first boats coming in for Fleet Week San Francisco. You can see the downtown San Francisco skyline in the background. 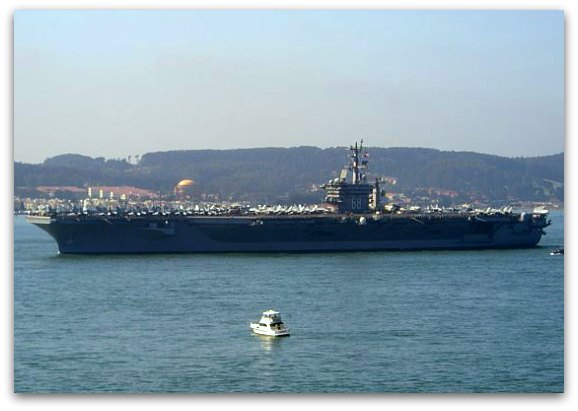 This is one of the largest ships that come into San Francisco for Fleet Week. It's an aircraft carrier and is open for tours all weekend. In the background are the Presidio and the Palace of Fine Arts. 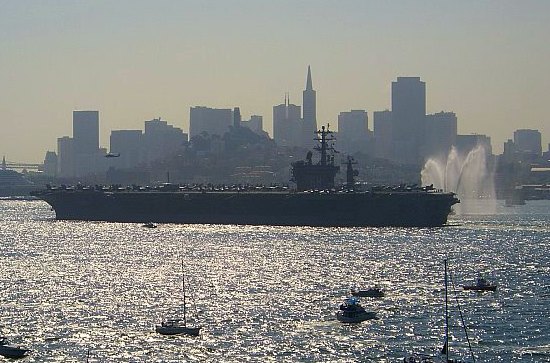 This is a second look at the aircraft carrier heading into San Francisco. It's close to Alcatraz Island and making its way to its pier to set up for tours. You can again see downtown San Francisco including the Transamerica building in the background.

The event that most people come out for is the air show on Friday, Saturday and Sunday from 12 pm to 4 pm. There are several performances during the four-hour show.

All three days, the air show finishes with an amazing performance by the Blue Angels. They always start their performance a little after 3pm. Even if you have watched them before, you will never get tired of seeing their performance over the San Francisco Bay.

Here are just a few of my Blue Angels photos from previous Fleet Week San Francisco performances. This is a shot of just four of the six Blue Angels doing a maneuver. This is another shot from Pier 39. 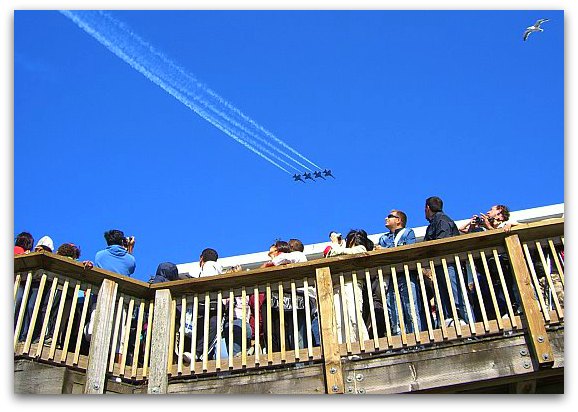 This is another shot of the Blue Angels, in the distance, performing over the San Francisco Bay. In front is a crowd of people and the sea lions near Pier 39. 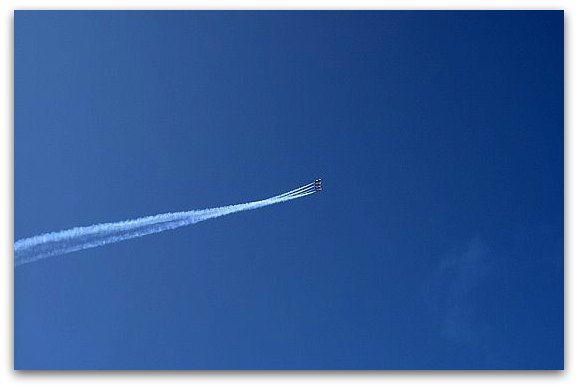 The smoke trailing the Blue Angels as they perform another maneuver.

The Blue Angels get daringly close during their performance. My camera does not have a great zoom, so this shows just how close you will feel from the viewing area!

You can also head out to catch some of the practice session on Thursday. There are fewer people around and they don't perform their entire show. However, it's a great way to catch the action if you are not going to be around on Friday, Saturday or Sunday.

Here is a full schedule of all free concerts for 2022. You'll find them both along the waterfront and also in neighborhoods throughout San Francisco. 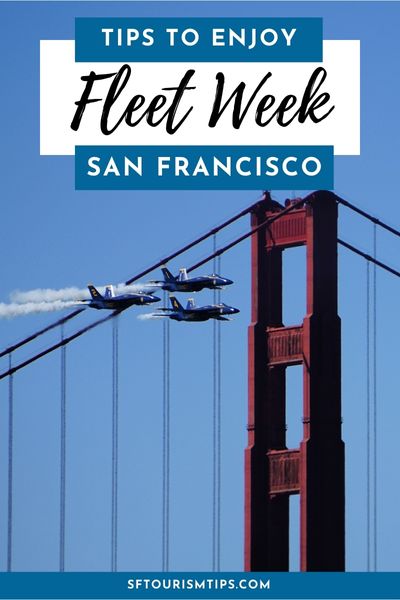