Outside Lands Festival in San Francisco 2022: One of the Most Popular Music Events in SF

The highly anticipated Outside Lands Festival in San Francisco this year will take place in August 5 - 7, 2022, on the western side of the city in Golden Gate Park.

Headliners for OSL 2022 include Green Day, Post Malone, and SZA. Other notable performers include Jack Harlow, Weezer, and Phoebe Bridgers. 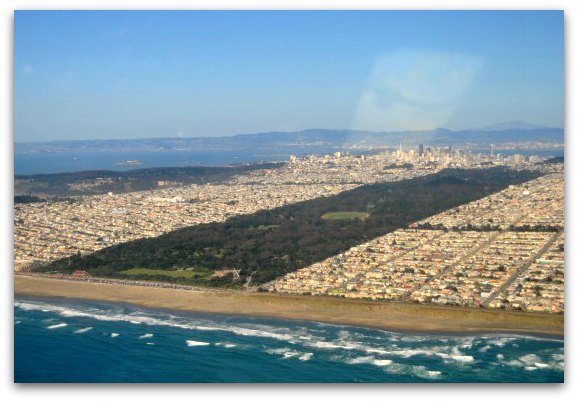 Around 70 bands will perform at the Outside Lands Music and Arts Festival again this year. Here is a list of some of the top performers. I'll rearrange this by day once more details are available.

This list may change including additional performers throughout the Outside Lands Festival in San Francisco 2022.

Find tickets for all days and for their 3-day pass.

Other Outside Lands Music and Arts Festival Details 2022

The 2022 Outside Lands Festival in San Francisco will follow all health guidelines to keep everyone safe. They will release more information a few weeks prior to the event, so they can implement any new guidelines necessary at the time for a safe event.

In addition to the music, Outside Lands does plan to offer several experiences as it's one of the most talked-about food, wine, and beer festivals in the country.

Taste of the Bay Area

The Outside Lands Festival in San Francisco draws several high-end restaurants and food trucks to the park. You can find everything from classic grilled cheese sandwiches to Malaysian nachos.

This year, there are more than 90 restaurants. Each one offers their two to three most popular dishes.

Here are just some of the vendors you will find at the Outside Lands Festival.

You will also find some of the best craft beers on the west coast. In total, around 30 breweries are already signed up to serve their frosty concoctions.

Local breweries such as 21st Amendment Brewery, Anchor Brewing Company, and Seven Stills will have their beers for sale. You can also find others from Lost Coast Brewery, North Coast Brewing, and Fort Point.

What should you expect from the weather during the Outside Lands Festival in San Francisco? The great thing about our October weather is that it's sunny, yet still cool and pleasant.

If you plan to stay all day, you will want to wear layers. I recommend long pants with a medium length short or long sleeved shirt. In addition, I would bring a jacket or sweater to throw on over that as it cools down.

More Tips to Enjoy the Festival

With thousands of people attending, you will want to either grab a hotel near the park or find a good route via public transit. Here are a few details to help you decide.

There are very few hotel options right next to the park. If you want to stay close by, you will find a few in the Haight Ashbury District or near Ocean Beach.

Your next best option is to stay near the city center, where you can easily catch public transit to the festival. Click the links below to find very centrally located recommendations.

The festival is in three areas of the park near the Outer Richmond: Polo Field, Hellman Hollow, and Lindley Meadow. Here is a map showing its location. 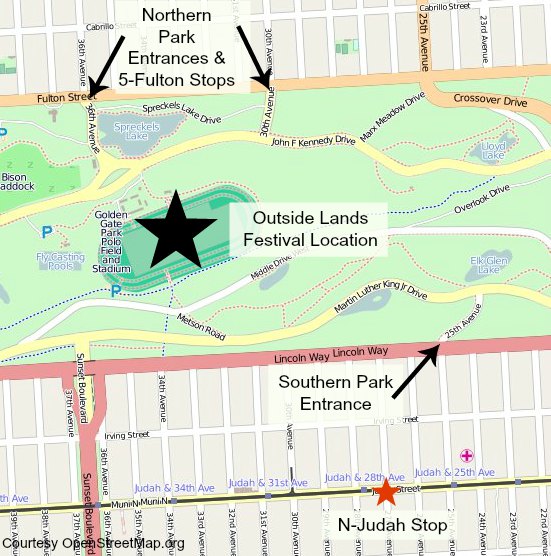 Driving: There is VERY limited parking in the area during this event. If you need to bring a car into the city, I'd find a parking garage in another neighborhood (Union Square or Civic Center) and use public transit to get to the event. This will save you a lot of time and hassle (unless you arrive hours before the gates open or don't mind walking a mile or more to the park).

Public Transit: Your two best public transit options are the N-Judah and the 5-Fulton.

If you decide you need to take a break from the Outside Lands Festival in San Francisco, you can check out some of the other great attractions and activities in Golden Gate Park. These include everything from the California Academy of Sciences to Ocean Beach. Discover more things to see and do here.

History of Outside Lands Festival in San Francisco

The Outside Lands Festival in San Francisco got its start in the summer of 2008. The name comes from the location of the festival. This area was referred to as the "Outside Lands," in the early 19th Century as the neighborhoods were inaccessible and mostly covered in sand dunes.

In the first year, some of the headliners including internationally recognized bands such as Tom Petty and the Heartbreakers, Radiohead, Beck, and The Black Keys. Even in its first year, it attracted more than 40,000 to 60,000 attendees each day!

The event has grown in popularity over the years and tickets are almost always sold out!

More Fun Things to Do in August