The SF Symphony is one of the best in the world. With more than a hundred events every year, it's easy to find one that you will enjoy.

The San Francisco Symphony also invites a number of guest performers and conductors. In the past, artists such as Judy Collins and Natalie Cole performed alongside the symphony.

In addition, they also host a number of large events every year. This includes their popular New Year's Eve Masquerade Ball. They also perform at the annual Black and White Ball. 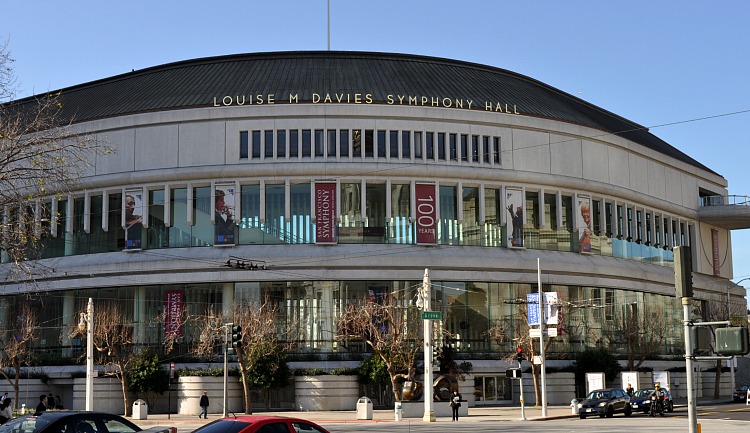 If you love the symphony or are looking for something a little different to do during your stay, then I recommend attending one of their premier events. I always have an amazing time at these performances.

2/5: Chamber Series: Gunn Theater At The Legion Of Honor

>> Tickets to all performances in February

>> Tickets to all upcoming performances in March

>> More events and things to do in March

5/7: Chamber Series: Gunn Theater At The Legion Of Honor

>> Find tickets for May shows

>> More events in May

>> Tickets to all performances in June

Where to Buy Tickets

Ticket prices for the SF Symphony range from $15 to more than $400 a ticket. Some performances sell out quickly, while others are sold at a discount to fill the seats.

Ticketmaster offers tickets for all SF Symphony performances. They are first run tickets, so you aren't buying on discount or from someone else. It's great for all performances.

TicketLiquidator is a great place to find the best seats or tickets to sold out performances. Here you will be able to select the best seat and the price point that works for you.

Rush Tickets are available for certain SF Symphony shows. These tickets are sold on the day of the show only at the ticket booth at Davies Symphony Hall and are just $25 a piece (limit of 2 per person).

It's another great way to pick up some discounted tickets for performances.

To see if they have Rush Tickets available, contact them at 415-503-5577 or stop by the ticket booth in person.

Here is the seating chart for Davies Symphony Hall. The image is courtesy of SFSymphony.org and will give you an idea on the best seats for these shows. 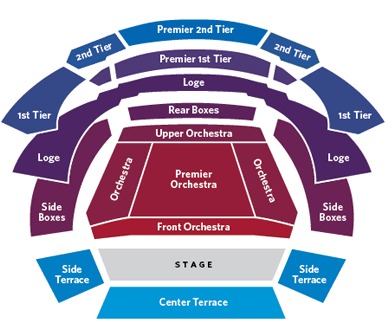 Here is a look at the stage from the 2nd Tier. 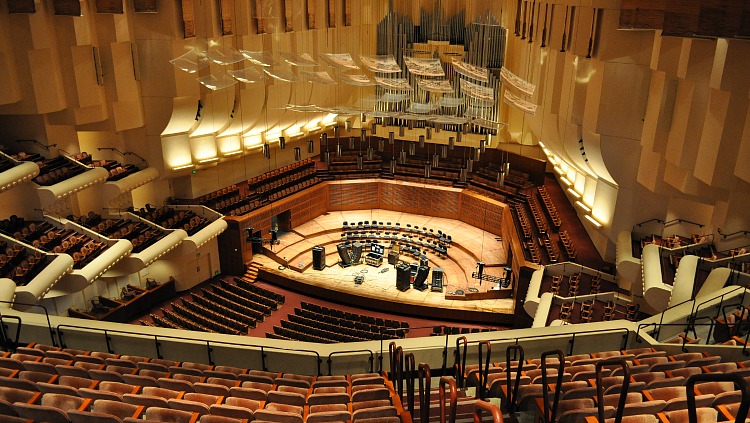 If you would prefer to buy your tickets in advance or have tickets at Will Call, you can stop by the Box Office. Will call tickets are available starting the day after you purchase them or the day of the performance, which ever time frame is sooner.

The Box Office is open the following hours.

Sunday: 2 hours prior to concerts

They are closed on major holidays if they do not have a performance.

You will want to park your car in a garage when you attend a performance. Street parking is tough in this neighborhood and there are strict regulations on how long you can keep your car in one spot.

Here are a few parking garages near the performances.

Performing Arts Garage: Located at 360 Grover Street, it is only about two blocks away from the Davis Symphony Hall (on Grover between Van Ness and Franklin). Rates range from $5 to $40 per event.

Fox Plaza: Located at 1390 Market Street, this valet only lot is just four blocks away. Rates range from $7 to $19 an hour, no overnight parking allowed.

Opera Plaza: Located at 601 Van Ness Avenue, this one is just four blocks away from Davies Symphony Hall. It's a large parking garage with 400 spaces. Rates range from $18 to $26 per show.

Note: Parking rates may change at any time. The prices above are estimates to help you decide which lot is best. However, they may increase or decrease their prices at any time.

Find pricing and other details for this and other SF parking garages in the Civic Center & Hayes Valley neighborhoods.

What to Wear to a San Francisco Symphony Performance

Most people associate SF Symphony performances with formal dresses or attire. While they do request this dress code for special performances, you'll find most attendees dressed in semi-formal or business casual attire. They also invite you to come as you are which means if you are more comfortable in jeans, then come in what makes you comfortable.

If a more formal dress code is desired, you'll find this information when purchasing your tickets. They usually request formal attire for their annual New Year's Eve Masquerade Ball and special opening-night performances to kick off the season.

I also recommend that you check the SF weather for your visit. Since we are surrounded by water, our weather is quite different than the rest of California. Find tips for what to wear based on the weather.

Restaurants Near the SF Symphony

Lately, it seems like there's a new restaurant opening in this neighborhood almost every week. This provides you with a large selection.

Here are just a few of my favorites.

Since this neighborhood is quite busy on the night of any performance, I recommend planning ahead and booking a table in advance. Otherwise you might have to wait for an hour or more to get a table.

If you decide you want to stay the night in this neighborhood, there several two and three-star options. They range from smaller bed-and-breakfasts to medium-sized hotels.

Every year, the SF Symphony plays at Shoreline Amphitheater in Mountain View for Fourth of July. They perform classics as well as modern favorites. The show starts at 8pm and is followed by a fun fireworks display.

>> More about Fourth of July in SF

You can also catch a free performance by the SF Symphony at the annual Stern Grove Festival. This event runs from mid-June to mid-August with different performances every Sunday at 2pm.

The symphony typically plays the first or second weekend in July.

For most performances, they recommend that you only bring along children 12 and older. Most shows are long and most kids will get bored with it before it's over. It allows everyone to be able to focus on this award-winning music.

However, they want to bring music to the entire family, so offer several family-friendly shows. These Music for the Families performances are on Sundays.

In addition to the kid-friendly music, they also offer interactive components to keep the entire family entertained. They recommend these shows for those 5 and older.

Other Tips for Getting to the SF Symphony

If you don't want to deal with the parking in this neighborhood, there are several public transportation options.

BART: The fastest and most direct route from Union Square is by taking the BART train. The closest stop is near Market and Powell streets. From here, it's just one stop to the Civic Center station. Davies Symphony Hall is about a six or seven block walk from the station.

21 Hayes: This bus has several stops along Market Street. It will take you all the way to the Civic Center and Hayes Valley neighborhoods.

47 Caltrain: Another public transportation option from Fisherman's Wharf is the 47. This bus picks up at several places along North Point Street - which runs along the southern end of Fisherman's Wharf.

History of the SF Symphony 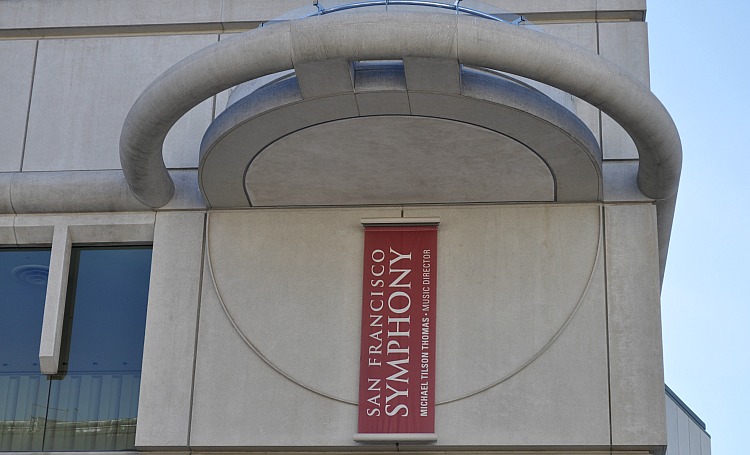 This decorated company has won dozens of awards. They won the Pulitzer Prize for Music in 2001, 15 Grammy Awards, and the Peabody Award in 2007.

Davies Symphony Hall is a beautiful structure in the Civic Center district just a few blocks away from the hip Hayes Valley neighborhood. This beautiful structure sits across the street from SF's City Hall. It's just one of the buildings in the San Francisco War Memorial and Performing Arts Center.

You will find it at 201 Van Ness Avenue.

It was finished in 1980 and offered the SF Symphony their first permanent home. Before this, they shared a space with both the opera and ballet. Their new home now allows them to offer year around performances.

Davies Symphony Hall seats just over 2,700 people. The building is also home to the Wattis Room (a dining hall for large donors), offices, and other facilities for the musicians.

While you are here, don't miss your chance to gaze out it's floor to ceiling windows at City Hall across the street. The best view is from the second floor. 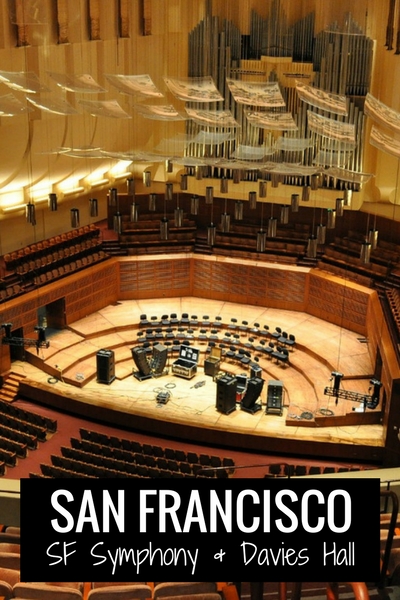