Weather in San Francisco CA & What to Wear

Many people are caught off guard by the weather in San Francisco CA. We have a unique climate here. The typical weather here is much cooler than the rest of California.

Why is San Francisco cold all the time?

The city is actually a peninsula, surrounded on three sides by cool water where the Pacific Ocean on the west meets the bay on the east. When warm air mixes with this cool water, it creates fog.

This is what we like to refer to as our 'natural air-conditioning'! It keeps the city a comfortable, even temperature throughout the year.

"The coldest winter I ever spent was a summer in San Francisco."

Although we now know he didn't say this, the quote has become synonymous with our year-round cool temperatures. Yes, even in the summer!

In the picture below, you can see the clear day with the fog starting to roll in under the Golden Gate Bridge. The hazy look of the bridge is also due to the fog.

View of the fog coming in under the Golden Gate Bridge from Hyde Street in Russian Hill.

We also get quite a bit of wind, which blows in from the Pacific Ocean.

It isn't windy every day, but it's one more San Francisco weather factor that keeps the city cool most of the year.

Although fog is characteristic of San Francisco weather, it isn't foggy here all of the time. So what are the San Francisco fog seasons?

There are two: summer and winter. Each fog season is different as the fog is created by a distinct type of weather pattern. Read on for more details.

Southern Tower of the Golden Gate Bridge surrounded in our thick, Summer fog.

Our summer fog is dense and beautiful. This is the fog that is often written about and photographed. The summer fog, officially known as advection fog, typically hangs over the city in the mornings, burns off throughout the day, and then floats back into the city in the evenings from the Pacific Ocean.

The picture above shows you how thick it can get in the summer. I took this while I was on the western end of Crissy Field having a picnic with friends. The Golden Gate Bridge is less than a half mile away and there is so much fog you can barely see it!

The winter fog in San Francisco, known as tule fog, isn't as thick and doesn't get the press that our summer fog gets. In fact, it's often confused with just regular cloud cover since it doesn't always dip down as low on the city and doesn't have the beautiful "billowing" effect.

That's because, rather than coming in under the Golden Gate Bridge from the ocean, this type of fog comes from the inland regions to the east, and can last for days or weeks at a time.

It coincides with our rainy season and you will find it anytime between the end of November through early March.

In the picture above, which I took in early April from the Marin Headlands on the northern end of the Golden Gate Bridge, you'll notice the difference between winter and summer fog.

San Francisco is also known as the city built on seven hills. These hills and valleys, combined with the fog, wind, and surrounding water, are the reason for San Francisco's microclimate—pockets of the city that can vary greatly in temperature, up to 15 degrees from one district to the next!

That means, even if it's warm and sunny in Union Square, it might be foggy and windy in Golden Gate Park at the same exact time.

This is one of the reasons that I recommend you wear layers throughout your stay: you can add or remove pieces as you move from neighborhood to neighborhood (or sometimes just a few blocks in from the waterfront)!

What to expect by region:

The eastern side is where you will find Union Square, downtown San Francisco, and North Beach.

The western end is where the city meets the Pacific Ocean. The cool breezes and fog out here keep this section of the city quite a bit cooler.

Certain districts, like Noe Valley, get quite a bit of sun and tend to be warmer than other districts just up the street from it, since Twin Peaks to its west blocks some of the fog.

Here is a monthly breakdown of the weather in San Francisco CA. As you can see from the table below, the temperature doesn't change much throughout the year, making this city one of the most desirable places to live!

What to Wear: By Season & Month

I often get asked, "What should you wear in the cool weather in San Francisco CA?" Here you will find a few tips to help you pack the right clothes for your San Francisco vacation.

Mostly it boils down to one word: layers!

By layering your clothing, you can add and remove pieces as necessary. I always bring along a light sweater or jacket whenever I go out (yes, even in the summer!) so I can warm up or cool down if needed.

SF is a very casual place, so you can wear jeans or casual clothes to almost any event, restaurant, or bar. After all, Levi Strauss invented jeans here, so we don't often break from that tradition!

You will find some higher-end restaurants or special events that require smart casual or business casual dress. Not to worry though, I will keep you aware of those details in the descriptions on my events pages. You will know if you need to pack something a little dressier.

This section provides a more detailed look—by season and month—to help you pack for your trip.

Click any of the links below to skip ahead to a specific time of year.

If you already know what month you will be visiting, you can head straight to my dedicated weather pages. Here you will find quite a bit more detail about what to expect that month as well as some tips on what to wear!

Click the links below to learn more for the specific month you are visiting!

This is my favorite time of the year in San Francisco because the weather is sunny and beautiful. The average daily highs are around 70 with lows at night in the mid-50s, and it is rarely foggy.

During this time, I typically wear a short-sleeved shirt and carry along a light sweater. At night, I will add a light jacket—and sometimes move to close-toed shoes to stay warmer.

This is the best time of year to wear a skirt and sometimes even shorts. However, make sure you have plenty of long pants or jeans, too.

We usually just have two months of 'spring weather,' as April and May are nice and sunny. You will find temps in the mid-60s during the day and mid-50s at night.

A short-sleeved shirt along with a light sweater or jacket is your best bet during the day. You should also bring along a warmer sweater or jacket at night. Layering is key, so you can add and remove items throughout the day.

These three months are the hardest to understand since the weather forecast and average temperatures can be deceiving.

Looking at the temperatures, you will see the average highs in the upper 60s and lows in the mid-50s. Perfect, right? Yes and no.

While the weather is still beautiful this time of year, it can change quite a bit from one day to the next due to the fog. One day it might be 75, sunny and gorgeous—and then the next day, you might wake up to fog, wind, and temps around 55.

The other thing that happens during these months is that the temperature fluctuates throughout the day. Even if you wake up to fog, it might burn off during the day and warm up quite a bit. Or the reverse—you might wake up to a sunny, warm morning and then get chilly in the late afternoon when the fog and wind start to roll in for the night.

Make sure you can mix and match everything above. This allows you to move your clothes around if it's warmer or cooler than expected on any given day.

If you are often cold like me, then you can leave the shorts at home.

This is a picture I took during a foggy summer day. It looks like it's going to rain, but it's just a heavy layer of fog over the Golden Gate Bridge. 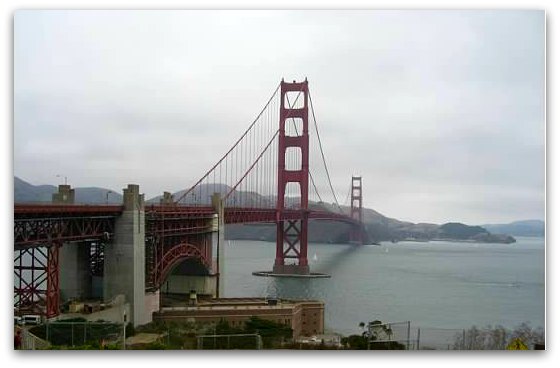 This is another picture I took around the same time of year. As you can see, even if it's foggy one day, the next might be clear and sunny! 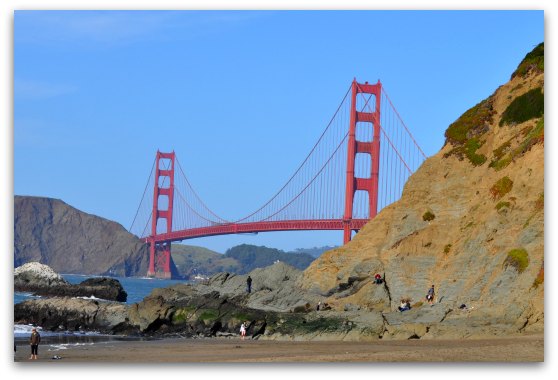 November to March is our rainy season, when temperatures are slightly cooler. During the day, the temperatures hover around 60. At night, they drop down to around 50—and some nights even colder.

You will want to bring along medium-weight shirts, sweaters, and at least one jacket. Again, this allows you to layer—as the temps can be different from day to day.

You will also want to prepare for the rain. We get a light rain that is easy to walk in but might last all day. We rarely have thunderstorms and it's not very common for us to get downpours.

Your best option is to bring along a medium-weight raincoat that you can wear all the time, and—only if you don't mind carrying it around—an umbrella if you want to stay completely dry.

Click the links below for additional details by month.

Here are some examples of the lighter sweaters and jackets that work almost any time of year for the weather in San Francisco CA:

Looking at the weather for San Francisco CA online is a little deceiving. You need to make sure you select a location that is directly in San Francisco for the most accurate forecast.

If you are looking at the weather at SFO (which is the default location for most weather sites for SF), it's going to show up warmer or cooler than the city itself. SFO is warmer in the summer and slightly cooler in the winter.

To get the most accurate San Francisco weather forecast, type in a specific zip code such as 94133 (Fisherman's Wharf) or 94102 (Union Square). This will pinpoint the temperature in the area of the city you are visiting.

If you are watching the weather forecast on TV, you will notice that there are three different temperature zones:

This is for the areas in San Francisco that are near the ocean, including Ocean Beach, Golden Gate Park and the Presidio.

This is for the eastern half of SF and locations just north and east of San Francisco along the bay. These temperatures are usually about 10 to 15 degrees warmer than in the city itself.

Areas that apply include Fisherman's Wharf, Alcatraz, and other sites on the east side of San Francisco, as well as the surrounding cities of Berkeley, Oakland, Sausalito, and Tiburon.

The inland area temperatures are for areas that are not along the water. These are usually about 35 to 40 degrees warmer than SF in the summer. In the winter, they can be up to 20 to 25 degrees cooler.

These are for those visiting San Jose, Santa Rosa, and areas to the east such as Walnut Creek. There is a wide variation in temperatures based on location.

How does San Francisco weather compare to San Jose weather? The weather in San Jose is warmer than in SF. Temps are fairly consistent between these two cities from November to February. The rest of the year, the San Jose weather is warmer. You will find temps up into the 80s from June through September, but still cooling down into the upper 50s at night.