San Francisco Streetcars: All About SF's Streetcars & Tips to Visit the Railway Museum

San Francisco is proud of its historical transportation options. In addition to our famed cable cars, you will also find vintage San Francisco streetcars.

We currently have one lines in operation.

The F Market & Wharves is the first line and it runs from Fisherman's Wharf all the way to the Castro District. It runs along the Embarcadero and down Market Street as it makes its way between these two SF neighborhoods.

There was a second line called the E Embarcadero. It ran between Fisherman's Wharf along the Embarcadero and past Oracle Park. It ended near the Caltrain Station in the South of Market District.

The E line is currently suspended and I'm not sure if/when it will be running again.

How are the San Francisco Streetcars Different from Our Cable Cars?

They run on tracks, which are similar to those used by cable cars. However, they are powered by the electrical lines above the cars instead of cables between the tracks below the cars like the cable cars.

They also run about two to three times faster than a cable car.

The first line started running in 1892. After the damage from the 1906 Earthquake and Fire, San Francisco streetcars started to replace the cable cars.

Over the years, the city used the lines less and less as faster transportation options became available. Over time, the city started to move the lines underground and by 1982 they moved the final San Francisco streetcars into the subway. 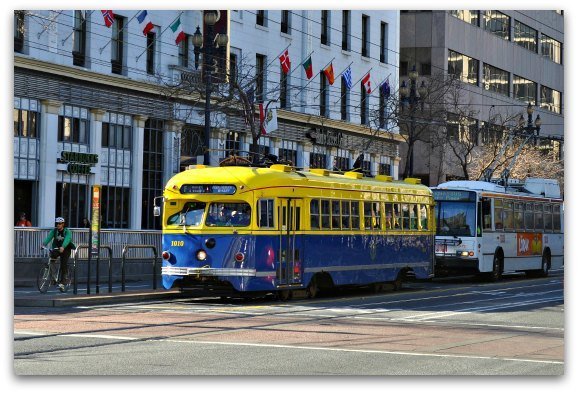 In 1983, business leaders, Muni, and Mayor Dianne Feinstein invited historic cars from around the world to run up and down Market Street during the Historic Trolley Festival.

The festival started during a period when our popular cable car tracks were under construction and they were not in use for two years.

The festival renewed interest in them and the effort began to get the F line back above ground.

Several of them now call San Francisco home today. Even though there is just two lines, you will find a variety of these vintage vehicles cruising up and down the F line.

They are an important part of the overall SF public transportation system. I recommend riding one while you are here.

Each one is a little different and from various places throughout the world. The cool thing is that you can learn a little about the history of the one you are on during your ride.

Here is an example of the sign you will see inside each one. They are usually toward the front, so make sure you sit in that area if you want to learn more about it. 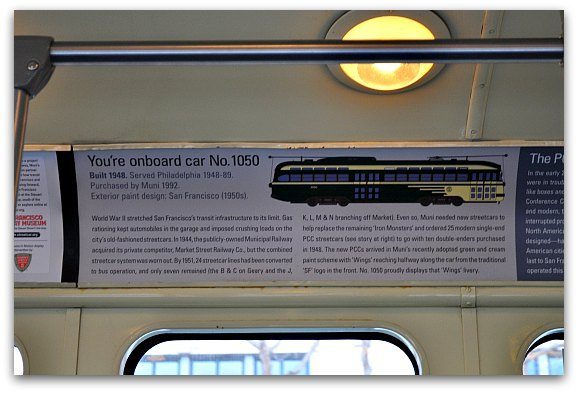 The most popular route for the San Francisco streetcars is the F Market & Wharves line. As I mentioned at this top, this line runs between the Castro and Fisherman's Wharf Districts via Market Street and Union Square.

There are 20 stops on this route. Here are some of the most important stops on the F Market & Wharves line. They are listed in order from Fisherman's Wharf to the Castro District.

Top options include Embarcadero & Stockton Street, Jefferson & Powell, Jefferson & Taylor (this will drop you in the heart of the district), and Jones & Beach (this is where the drivers take a break so it's considered both the first and last stop).

Embarcadero & Stockton, this will put you right outside Pier 39

Embarcadero & Bay Streets, walk across the Embarcadero to the waterfront to find the Alcatraz Cruises

Embarcadero & Green Street, the Exploratorium is on Pier 15

Embarcadero & Washington Streets, walk toward the water to find the Ferry Building on Pier 1

Market & Drumm Streets, this will get you to the entrance of the Embarcadero BART stop where you can head to the East Bay, Peninsula, or SFO

Market & Kearny, you will find several SF museums near this stop. It's the top options for the SF MOMA, the Museum of African Diaspora, the Contemporary Jewish Museum, and Yerba Buena Gardens.

Market & Kearny, this is also the best stop for the Moscone Center.

Market & Stockton, when you hop off, walk up Stockton two blocks to Union Square.

Market Street and 5th Street, this is the stop where you can pick up the cable cars between Union Square and Fisherman's Wharf.

Market & Taylor Streets, this will drop you right in front of the Golden Gate Theater for Broadway shows.

Market & Hyde Streets, this will drop you right in front of the Orpheum Theater where more Broadway shows are on stage all year long.

Market & Larkin Streets, this is also a great stop for the Civic Center District. This is where you will find City Hall and the SF Asian Art Museum as well as dozens of great festivals every year. You will also find the Bill Graham Civic Auditorium at this stop.

Market & Gough, this is where you can stop to check out Hayes Valley. You will find great restaurants and shopping here.

17th and Castro, this will get you into the heart of the colorful Castro District.

Oracle Park: King & 2nd, this is a large stop and is right across the street from Oracle Park where the SF Giants Baseball team plays.

Caltrain Station: King & 4th, this is the stop closest to the Caltrain Station which will take you south through the Peninsula and all the way to San Jose. 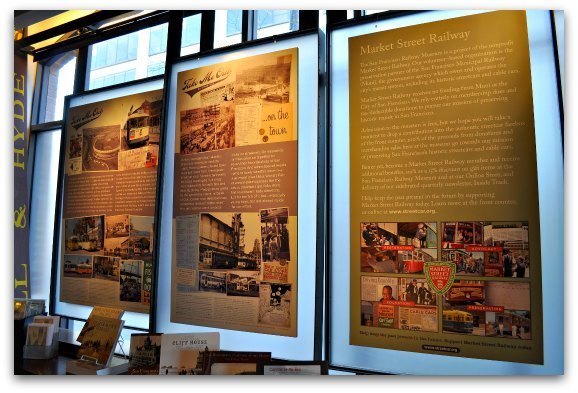 One of the exhibits inside the museum

You will find the museum at the Steuart Street F-line stop. Just look for the sign below or ask the conductor to tell you when you reach your stop. 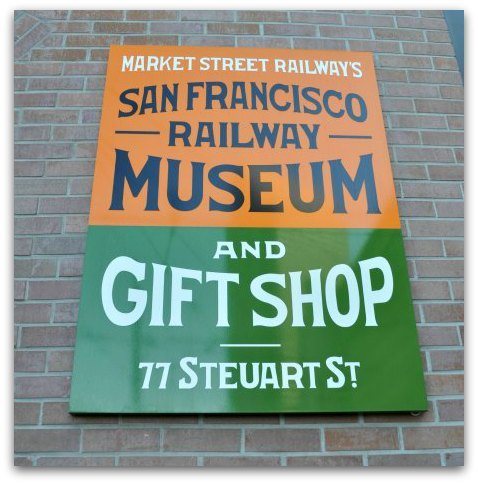 The Railway Museum is open from 10 am to 5 pm from Tuesday - Sunday. It is closed on Monday.

While you are there, ask the attendant if you can see the screen that shows the current location of all of the streetcars. On the screen, you will see a little picture of each one moving around the city. It's a small thing, but kind of cool to see. 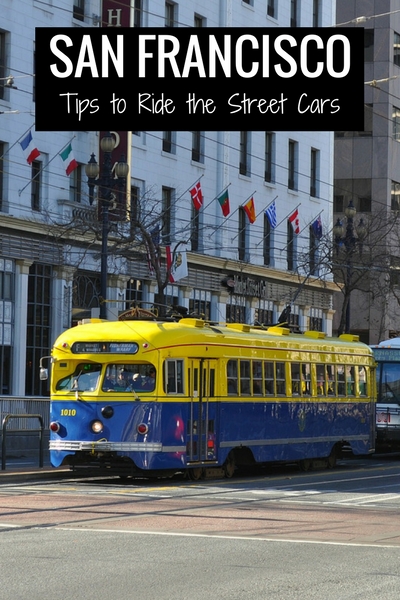