The Chinese New Year celebration in San Francisco is one of the largest in the world. The main draw of this celebration, the Grand Parade, will be held on Saturday, February 4.

In addition, you will find lots of fun events for the lunar new year in both January and February. 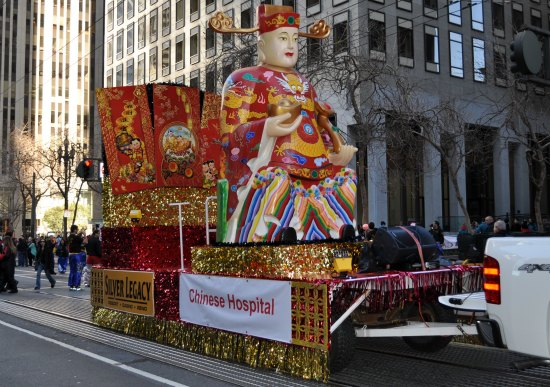 One of the floats in the Chinese New Year Parade

Brief History of the Event

The Chinese New Year celebration in San Francisco first began in the mid-1800s, when many immigrants from China came to the US looking for work.

As the word of the Gold Rush in California spread, many Chinese immigrants decided to stay in San Francisco. This built up a large Chinese community in this city, forming the famous Chinatown district that is still very much alive today.

When they planned their first full scale New Year's celebration here, they incorporated both Chinese and American traditions. They loved the idea of having a large, colorful parade, though that was not done in China at that time.

Today, this celebration and parade is one of the largest in the world. More than three million people watch the parade every year.

There are more than 100 parade entries. These include participants marching down the street with flags, lanterns, and drums.

The parade also includes several floats, the largest and most popular of which is the 28-foot-long Golden Dragon. It takes a team of more than 100 people to operate and move it through the streets of San Francisco.

The 2023 Chinese New Year Parade is on Saturday, February 4. It starts at 5:15 pm at the corner of 2nd and Market Streets. It then weaves its way through Chinatown and ends at Jackson and Kearny Streets. The parade usually ends around 8 pm.

Here is a map of the full route. 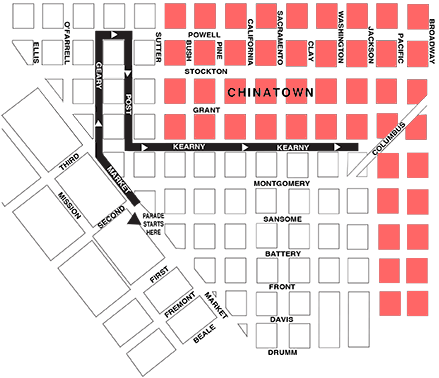 You can either watch it in person or on KTVU Channel 2, a local San Francisco station. People start to line up along the parade route several hours in advance. If you want a front row spot, I recommend getting there at least an hour before the parade starts.

Are you looking for other fun things to do in Chinatown during your visit? Click here for a detailed one-day itinerary in this fun SF district. 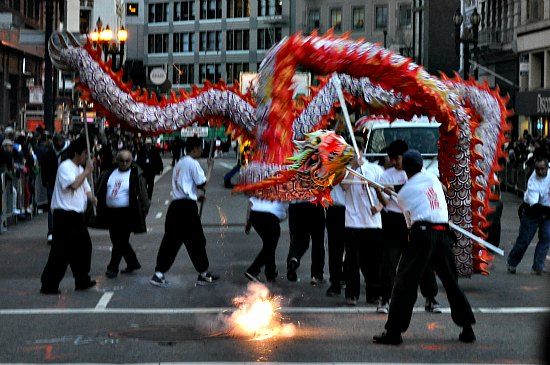 If you don't want to stand, you can also buy bleacher seats. These are along the parade route on Kearny Street. Tickets are around $38 - $55 per person. They will then either email them to you or you can access them in the Eventbrite mobile app.

The bleacher seats are not assigned and there is no coverage above the seats. Click here to order your tickets online.

While most people attend just the parade, there are several other events scheduled to celebrate the Chinese New Year in San Francisco.

Here are the events planned for 2023.

Any hotels in Union Square will get you within walking distance to Chinatown. There are also a few that are just steps from the Chinatown gates. Here are my recommendations on where to stay near Chinatown.

Are you looking for a great deal on your hotel for the Chinese New Year parade? Read recent reviews and find the best deals on TripAdvisor today.

Here are some of the best places to stay in in Union Square.

Here are also some great budget-friendly options for those looking to spend a little less on their hotel stay. These are spread throughout the city, but most are close to public transit so you can easily get to Chinatown.

Getting to the Event

Chinatown is just steps from Union Square and downtown San Francisco. If you are staying in Union Square, you can easily walk over to the events or take one of several transit options.

If you are driving into the city or from another neighborhood, here are some of the best parking options. All of these are in Union Square.

Parking is quite expensive in San Francisco, so be prepared to pay anywhere from $30 to $50 a day. Some of these parking garages also increase their fees for large events.

Public transit is another option. BART drops you off just blocks from Chinatown and/or the parade route. This is a great option if you are coming in from outside the city.

Buses from Marin also drop off just blocks from Union Square and Chinatown.

Prepare for the Weather

The weather in San Francisco in February is often cool and rainy. Most of the celebrations, including the parade, are all outdoors.

If you attend any of these celebrations, dress warm and bring along your umbrella or rain gear. It often rains during this parade, but they rarely cancel. The festivities will still be running strong, so plan ahead for this celebration.

Find out even more tips on what to wear - all year around - in San Francisco.