San Francisco Cemeteries: Where to Find and How to Visit these Special Resting Places

Are you interested in visiting some of our San Francisco cemeteries? You will find two within the city limits as well as two columbariums that are open to the public.

The first is the National Cemetery in the Presidio. The second is behind the Mission San Francisco de Asis. The rest of the graves that existed in the city's early days were dug up and relocated south of SF in the early 1900s.

In addition to these, you will also find columbariums that hold the ashes of the deceased. One is a large neoclassical building which survived the removal of the cemetery that once surrounded it in the Richmond District. Another is located within the beautiful Gothic Grace Cathedral in SF's Nob Hill.

Read on for the history and visiting details for these important spaces in SF.

At one time, San Francisco, like most cities, had cemeteries where they buried their deceased residents. As the city was being settled and established in the late 1700s and early 1800s, these burial sites were at Mission Dolores, Telegraph Hill, North Beach, Yerba Buena Cemetery (now the site of the SF Main Library) and the City Cemetery (now the site of the Legion of Honor).

Then the boom of the Gold Rush changed San Francisco drastically, and from 1849 onward, there was less and less space to accommodate the rapidly growing population. By 1900, the Board of Supervisors voted to stop all burials within city limits and relocate the existing graves from the San Francisco cemeteries to Lawndale (now Colma).

Throughout its history, there were probably more than 200,000 graves dug in San Francisco, but the exact number is unknown as most of the records were destroyed in the Great Earthquake and Fire of 1906. The only remaining San Francisco cemeteries are the National Cemetery in the Presidio and the old cemetery at Mission Dolores (San Francisco de Asis).

Did you know? Colma, the city just south San Francisco where most of the old graves were relocated and new cemeteries were founded, has more dead residents (around 5 million) than living!

Two Within the City Limits

National Cemetery in the Presidio in San Francisco with the Golden Gate Bridge in the background.

The National Cemetery is for military personnel only. Due to its size, only those who purchased plots already are allowed to be buried there. They also sometimes allow burials of high-profile individuals, but you must receive special permission.

With over 30,000 grave sites, this is the larger of the two remaining San Francisco cemeteries. The first person was buried at this site by the military in 1854.

In 1884, it became one of the first official national cemeteries on the west coast.

It is located in the Presidio, overlooking the Golden Gate Bridge, Alcatraz, and Angel Island.

Click here to see photos of the National Cemetery and get tips on visiting. 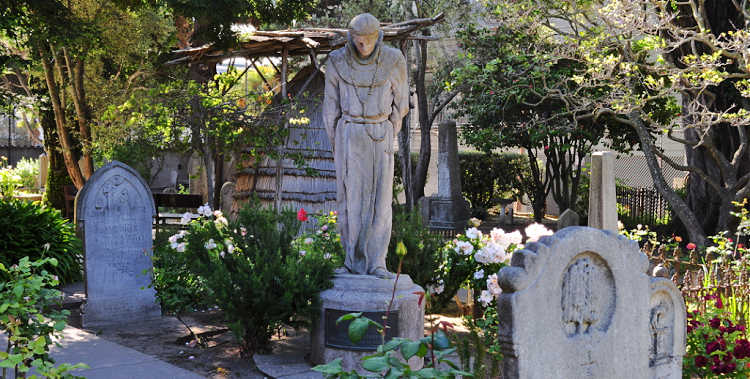 A statue in the Mission Dolores Cemetery, one of the oldest in San Francisco.

The second of the two San Francisco cemeteries is at the Mission San Francisco de Asis. Commonly known as Mission Dolores, this historic landmark is the oldest building in San Francisco and also the oldest intact mission in California, containing a chapel, basilica, and museum in addition to the cemetery.

The cemetery at the Mission San Francisco de Asis does not allow any new burials. Most of those buried here were active players in the Spanish rule of California and the mission system from the mid- to late- 1800s.

View photos of Mission Dolores as well as visitor's information.

Other Burial Locations in SF

Though burials in the ground are no longer allowed, the deceased's ashes may still be preserved at one of the columbariums in the city. Here is some information about the two most popular.

A view of the entrance to the Columbarium in the Richmond District.

Located in the Richmond District, the San Francisco Columbarium was once the centerpiece of the Old Fellows Cemetery, which was removed in the 1900s and replaced with residential streets.

Its impressive neoclassical architecture is topped with a copper dome, and its interior features mosaic tile floors, stained-glass windows, and a large rotunda.

It houses ashes from the late 1800s to the present day.

Take a peek at this gorgeous historic building.

A look at the outside of Grace Cathedral

Grace Cathedral, the country's third largest Episcopal Cathedral located in SF's Nob Hill neighborhood, also houses a columbarium where families can honor their loved ones with a memorial plaque or a niche for their ashes.

This Gothic style building is known for its labyrinths, stained-glass windows, carillon, and medieval touches. 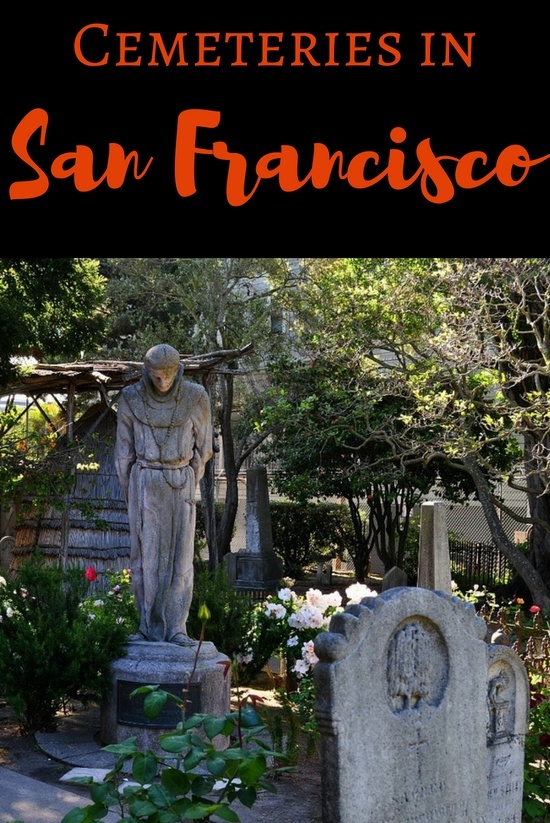 Alcatraz: For most visitors to San Francisco, the famed Alcatraz Island (a.k.a. The Rock) is a must-see. Hop on a ferry to tour this old federal prison in the bay and learn about the various escape attempts. Click here for details.

Golden Gate Bridge: This glorious orange gate to the San Francisco Bay is a true icon of the city. Completed in 1937, this architectural feat was the longest suspension bridge in the world until 1964. Learn more about its history and tips for seeing it up close.

Japanese Tea Garden: Let this San Francisco attraction transport you to another land with its over five acres of tranquil gardens, ponds, bridges, and pagodas. Located within Golden Gate Park, it has been delighting visitors since 1894. View photos and learn more.

Hidden Gems: San Francisco may not be very large in square miles, but it sure has a lot of history tucked into every nook and cranny. If you don't have an insider's scoop, it's easy to miss such treats as the Fire Museum, Chinatown temples, and the oldest camera obscura in the US. Discover these and 22 other SF hidden gems.