Bay Bridge in San Francisco: All About this Famed Bridge and Tips to Find Spots to See It

The Bay Bridge in San Francisco connects the city and the East Bay which includes Oakland, Berkeley, and other cities further east. It also is part of the I-80 highway and covers 10 lanes over the SF Bay.

The bridge is split into two sections with very different designs. The Oakland (or East Bay) side is a new structure that was completed in 2013. The SF side opened in 1936.

The SF side is a double decker bridge with five lanes on each deck and has a huge volume of traffic everyday (more than double the volume of the Golden Gate Bridge). The Oakland side is a one deck which carries both east and west bound traffic on one level.

Read on for more information, where to find the best views and details on the SF side's nightly light show.

Here are a few fun facts about the Bay Bridge in San Francisco. 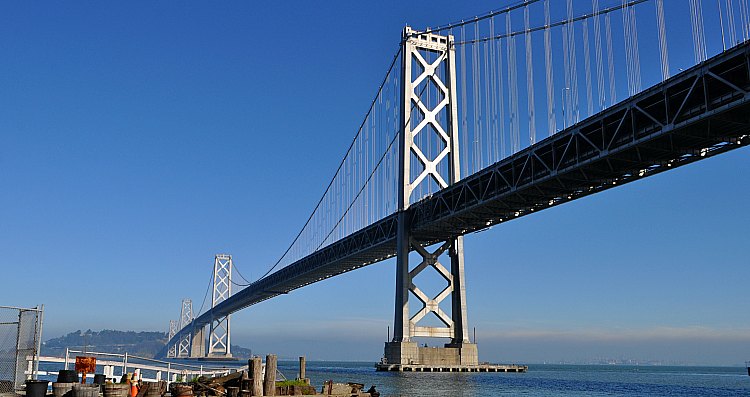 About the Bay Bridge in San Francisco Night Lights

The Bay Bridge in San Francisco now offers a nightly light show. Leo Villareal, a light artist, installed the lights as a temporary exhibit in 2013. The city originally planned to run the lights nightly between March 5, 2013 and March 5, 2015. 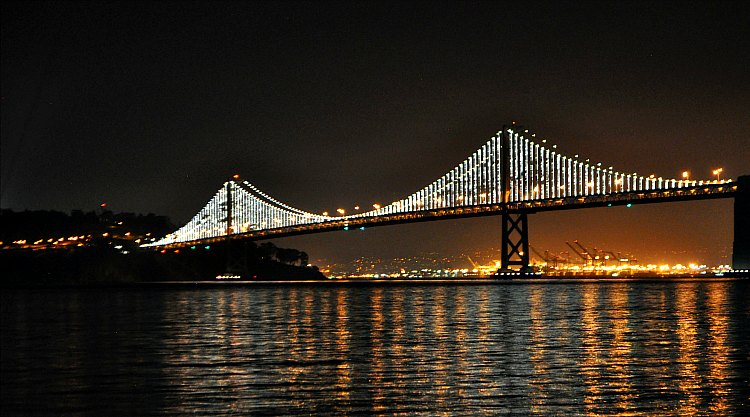 The support for the light show was so positive that private donations were collected to keep it going. The goal was to collect enough money to power it through 2026.

They were able to get most of the money for the campaign. In addition, they Bay Area Toll Authority agreed to provide some funding for maintenance and electricity for the show.

Permanent lights were installed, and it went live again on March, 2023. They are now in the process of another fund raising campaign and if they aren't able to raise the money, they will need to shut the lights off at night.

The light show is best viewed from the northern side of the Bay Bridge in San Francisco.

Where to Get the Best Views

Here are some of my favorite places to soak in the views of the Bay Bridge in San Francisco. 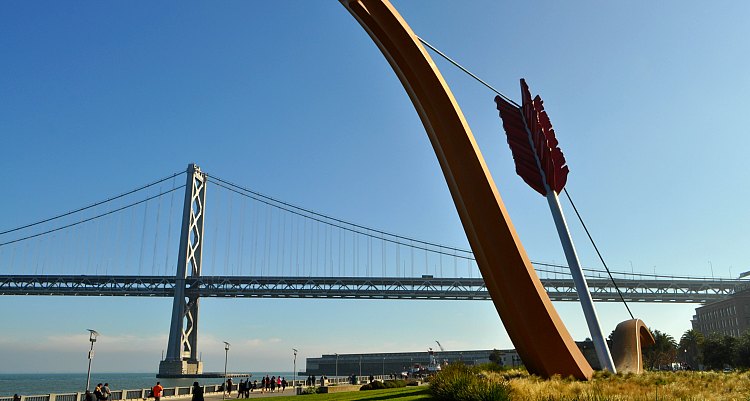 Embarcadero: The Embarcadero is the main road running along SF's waterfront. You will find plenty of spots to admire the bridge from here. The best spots are south of the Ferry Building which is Pier 1.

Pier 7: Just north of the Ferry Building is a long skinny pier that offers unobstructed views at the end.

Pier 14: This pier is on the south side of the Ferry Building is another option for unobstructed views of the Bay Bridge in San Francisco.

Tours that Include the Bay Bridge in San Francisco

Here are a few of the best tours that offer views and more details about this SF gem.

Bridge to Bridge Cruise: This daily cruise gives you the chance to go under both the Golden Gate Bridge and the Bay Bridge in San Francisco. It lasts 90-minutes and offers you some great information about both of these very important structures. Find tickets for this cruise.

Night Tour by Bus: This 90-minute night bus tour offers you the chance to learn more about SF at night. You will learn about top attractions including spending some time hearing more about the Bay Bridge in San Francisco as well as The Bay Lights show. Visit GetYourGuide for more details.

Walking and Biking the Eastern Span

The new eastern span includes a walking and biking path. This allows you to get from Oakland to Yerba Buena Island and back. It is known as the Bay Bridge Trail and it opened in 2016.

There is a dedicated space for both pedestrians and for bikers to maintain safety on the trail. From the entrance to Yerba Buena Island, the distance is 2.2 miles.

The path is open from 6 am to 9 pm daily and is free to use.

Driving over the Bay Bridge in San Francisco is intimidating for first timers. The traffic is moving fast, and people change lanes frequently.

If you plan to drive over it to get into SF or over to Oakland, make sure to do some preparation before you drive. Know exactly which lane you will be in based on your entry point. Also, find out which lane you need to be in to get off I-80.

This will give you the time needed to get into the right lane instead of trying to cross several lanes at the last minute in heavy traffic.

You will also find it easier to cross outside of rush hour traffic when it isn't as busy. Rush hour is usually on the weekdays from around 5 am to around 10 am going towards San Francisco and from around 3 pm to 7 pm heading back to the East Bay.

If you are unfamiliar with the bridge, I recommend trying to drive over it outside of these hours.

My other recommendation is to be on the lookout for motorcycles as you change lanes. In California, they are allowed to share lanes with cars, so you will see several motorcycles going faster, changing lanes quickly and driving in between cars.

Check and double check that there are no motorcycles coming before you switch lanes.

The cost is $7 to drive over the Oakland Bay Bridge.

For years, the city of San Francisco was a thriving place due to its ports. In 1869, the transcontinental railroad was completed, as the city felt disconnected from the rest of the US. 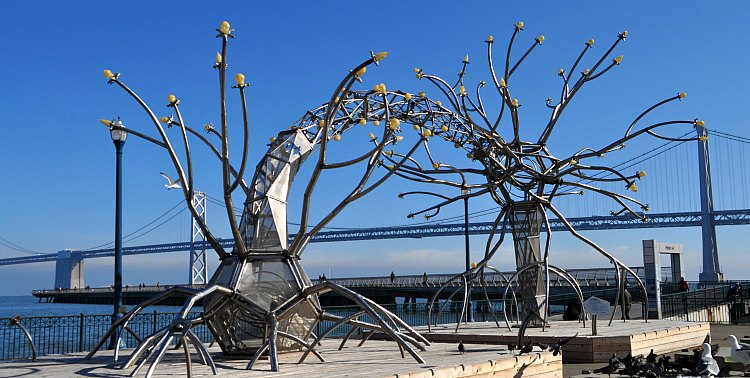 About this time is when talks started about building a bridge to connect San Francisco and Oakland. However, it took until 1929 for the California Legislature to pass a bill to start construction.

One challenge at the time was the use of Yerba Buena Island. At the time, the Navy controlled the island, which made it federal land. California worked with the US Congress to get permission to link the bridge on the island in 1931.

Construction started on July 9, 1933. Both sides of the bridge faced challenges along the way as well as the tunnel that was created to get through Yerba Buena Island.

However, the builders were undeterred and finished the project in 1936. It officially opened to traffic on November 12, 1936.

The original Bay Bridge in San Francisco included railway tracks for public transportation. These were removed to allow for more space for car traffic.

On November 7, 2007, the Cosco Busan, an oil tanker, hit the western span. More than 50,000 gallons of oil spilled into the SF Bay. This became a huge media story because the pilot of the ship had to be blood tested and was found to be impaired due to prescription drugs.

The spill impacted more than 200 miles of coastline and it took years for the local area to recover.

You will find several hotels near the Bay Bridge in San Francisco. The best options are those right along the Embarcadero. Several offer views from some of their premier rooms. Here are some of my top picks.

Hotel Vitale (8 Mission Street): 4-star hotel with several rooms with a view, restaurant and bar on site, each room offers modern amenities, and it is in a great location with easy access to downtown, Fisherman's Wharf, and Union Square. It's also a perfect place to stay if you plan to see an SF Giants game. Visit Booking.com for room availability.

Hotel Griffon (155 Steuart Street): 3.5-star hotel with a handful of rooms with a view of the bridge, recently voted as "Best Boutique Hotel" by San Francisco Magazine, room service and a restaurant/bar on site. Visit Booking.com for room availability.

Hyatt Regency (5 Embarcadero Center): 4-star hotel right on the Embarcadero across the street from the Ferry Building, located in the Financial District with easy access to nearby districts and public transportation. Visit Booking.com for room availability.

Bay Bridge in San Francisco in the Movies

You can get some great views of the Bay Bridge in San Francisco in these movies and TV shows.