The Embarcadero in San Francisco runs along the waterfront on the eastern side of the city. It starts in the north near Pier 39 and runs all the way south down to Oracle Park (formerly AT&T). It's about 2.5 miles long with the mid-point around Pier 1, The Ferry Building. 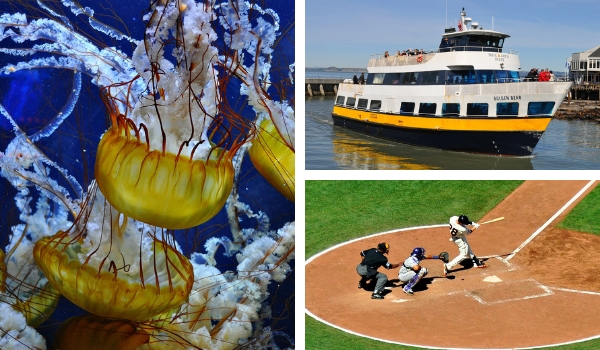 Along this popular street, you will find plenty of things to do including cruises, shopping, restaurants, bars and sporting events. It's also where you will find the Exploratorium, the James R. Herman Cruise Terminal, and SF Giants Baseball games.

Read on for information on the top 15 things to do and see along the Embarcadero as well as other tips for visiting.

15 Things to Do on the Embarcadero San Francisco

I've listed the activities starting in the north and then heading down to the south. This way, you can see what activities are close by each other and plan your itinerary easier. 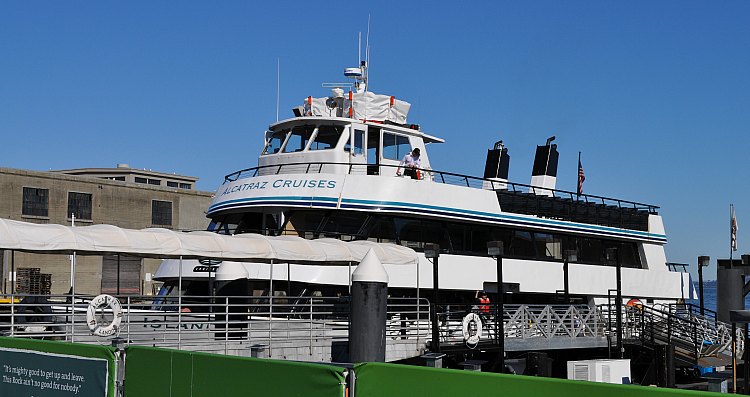 1. Aquarium of the Bay, Pier 39: The Aquarium of the Bay is one of my favorite attractions along the Embarcadero San Francisco. Inside, you will learn all about our local SF Bay plants and animals. The best part of the aquarium is the walk through tank, where you will see fish and other wildlife swimming all around you (including above your head!). Learn more about visiting.

2. 7D Experience, Pier 39: The 7D Experience is another top stop. Set inside Pier 39, this part movie, part video game experience is one you will never forget. In their small theater, you will work with other audience members to fight off the bad guys and come out with a victory. As you leave, you will see your final score and you can see how you stacked up against others competitors in the audience. Pick up discounted tickets for the 7D Experience on Groupon.

Planning to visit Alcatraz and head out on a tour? Check out these combo tours, which will help you save on the overall price.

6. Exploratorium, Pier 15 & 17: The next experience on the Embarcadero San Francisco is the Exploratorium. This hands-on, human perception museum offers you a chance to learn more about SF's weather patterns, the human body, and things such as color, space and time. It's an interesting museum and will keep you occupied for hours on end. Pick up tickets in advance in order to skip the ticket line.

7. Pier 7: Next up is Pier 7. This is one of my favorite places to get unobstructed views of the Bay Bridge and Treasure Island as the span reaches from San Francisco to Oakland. This long pier isn't often busy, since most tourists don't know about it, but I consider it a must see along your journey at the Embarcadero San Francisco.

9. Ferry Building, Pier 1: The half-way point between Pier 39 and Oracle Park is the Ferry Building. This renovated historic building originally opened in 1898. Today, it's the main ferry terminal for commuter ferries to places such as the East Bay, Marin, Sausalito and Tiburon. Its hallways are also now home to gourmet restaurants, food shops, and other food and beverage related retailers. Find out more about what you will see during your visit.

11. Pier 14: This is another long pier that takes you out over the water. It has some of the best views of the SF Bay Bridge and Treasure Island. If you turn around, and look towards the city, you will also get some great views of the buildings and artwork lined up along the Embarcadero San Francisco.

12. Rincon Park, Between Pier 14 & 22 1/2: This open area park has an interesting massive bow and arrow statue as its centerpiece. It's a popular place for locals to hang out during their lunch hour and enjoy the outdoors. You will also find some great views of the Bay Bridge.

13. Pier 24 Photography Museum, Pier 24: Tucked away in an old building under the Bay Bridge is a small photography museum called the Pier 24 Photography Museum. This magical museum is free, but it does require reservations. They do not have their own collection, but instead display three to four traveling exhibits at a time. It's a great way to see some interesting photographic art while on the Embarcadero San Francisco. Learn more about visiting.

14. City Kayak, Pier 40: If you love kayaking, make sure to check out the offerings at City Kayak on Pier 40. They offer trips for beginners and intermediate kayakers. You can also walk in without a reservations to rent a kayak for the day or longer. It's a fun way to spend the day on the water. Check out their site for details.

15. Oracle Park (formerly AT&T Park): The final stop on the southern end of the Embarcadero San Francisco is Oracle Park. This is the home of SF Giants. You will also find a couple of concerts here each year as well as a handful of annual events. Click the links below for ticketing information for upcoming events.

Fireworks Along the Embarcadero San Francisco

If you love fireworks then you are in luck since you will find fireworks along the Embarcadero San Francisco a few times each year. The two biggest displays are on Fourth of July and New Year's Eve. In addition to those, there are a few times a year that the San Francisco Giants also have fireworks displays. 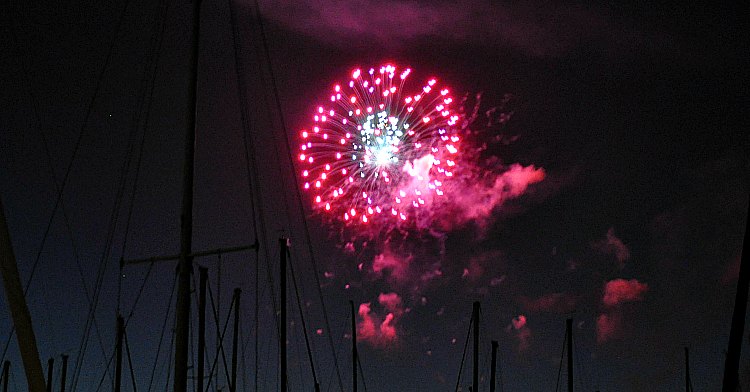 Fourth of July: Every 4th of July, there is a big fireworks show and festival near Pier 39 in Fisherman's Wharf. The days starts with plenty of activities near the waterfront as people settle in for their seat for the big extravaganza. At around 9:30pm, two barges set off fireworks near Pier 39. On a clear night, it's one of the best displays in the area. Find out more about this year's event.

New Year's Eve: Another large fireworks display each year is the big NYE event on December 31. This set is fired off in the area between the Ferry Building and the Bay Bridge. The fireworks start at 11:59pm and last for about 20 minutes. Learn more about this year's display.

SF Giants: A few times each season, the SF Giants also set off fireworks after their games. The dates change each year depending on when they are in town. You will find these at Oracle Park.

You will find several top restaurants lined up on both side of the Embarcadero San Francisco. Here are a few places where you will find large concentration of them:

Pier 39: You will find a large selection of restaurants on the northern end inside Pier 39. These include the Player's Sports Grill & Arcade, Fog Harbor Fish House, and Bubba Gump. You will also find Boudin Bakery with some of the best clam chowder in a sour dough bread bowl around anywhere. They also have coffee shops and several places for sweet treats.

Ferry Building: Inside the Ferry Building, you will find both high-end and casual spots to eat for breakfast, lunch or dinner. Some of my favorites include Gott's Roadside (with some of the best burgers in SF), Marketbar Restaurant (where you can sit outside to enjoy your meal), Boulette's Larder (which has some of the best locally grown food and an amazing view of the bay), and The Slanted Door (a famous spot with delicious Vietnamese cuisine).

South of Rincon Park: Just to the south of Rincon Park are two restaurants with amazing waterfront views. One of these is EPIC Steak with delicious steak, seafood, and sides that compliment each dish. Make sure to leave room for one of their desserts too. The other option is Waterbar. This high-end seafood restaurant offers oysters, bass, and salmon. You will also find steaks, lamb and pork dishes.

Near Oracle Park: You will also find a good concentration of restaurants near Oracle Park. Some of my favorites include Town's End Restaurant & Bakery, MoMo's, and The South Beach Cafe. Another favorite is the Java House, which is a small "grab and go" place right next to South Beach Park.

You will find a handful of hotels near the Embarcadero San Francisco. Here are a few top picks.

Hyatt Regency: The large Hyatt Regency is just across from the Ferry Building near Pier 1. It's a large 4-star hotel with easy access to public transit, Union Square, and all that SF has to offer. Rooms here either have views of the waterfront or the city of SF. 5 Embarcadero Center. Check for room availability.

Griffon Hotel: Recently voted as the "Best Boutique Hotel" by San Francisco magazine, this Griffon Hotel is just steps away from the attractions on the Embarcadero. It's a 3.5-star hotel that offers free wireless internet, bar/lounge on site, and air conditioning. 155 Steuart Street. Review recent reviews and check for availability on Booking.com.

Hotels in Fisherman's Wharf: If you plan to stay near the northern end by Pier 39, you will have a lot of options to choose from. Many of these are not right on the Embarcadero, but instead of just a few blocks away. Here are some of the best near Pier 39 in Fisherman's Wharf.

You can easily get here on foot from both Union Square and Fisherman's Wharf.

The E & F Streetcars run along the Embarcadero San Francisco. The K/T and the N light rail trains also make their way up and down here.

The Embarcadero Street BART Station is also the best stop for those coming from the East Bay or from the SFO / San Francisco Airport area. It will drop you off near the Ferry Building. You can also jump on other modes of transit from here to get to different parts of the Embarcadero San Francisco.