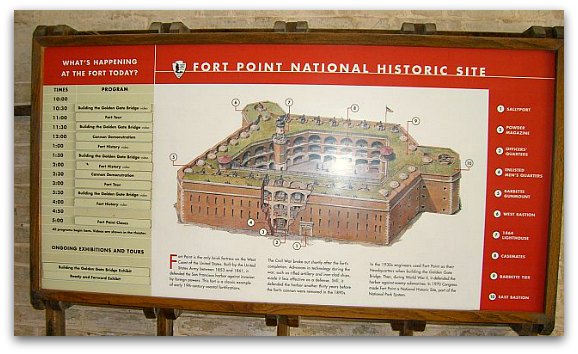 The Bay Area has been a key military site for hundreds of years. There are dozens of military spots around, but many are either abandoned or people are not allowed to visit them.

This list includes the ten most interesting military history tourist attractions San Francisco that you can visit during your stay here. At the end, you'll also learn about the best time to visit SF to appreciate its living military history.

The first one on the list is the Fort Point National Historic Site. This is one of my favorite military history tourist attractions San Francisco. The historic building on Fort Point was built in the late 1800s by the US Military.

They needed the building in this spot to protect the area from unwanted visitors or anyone looking to attack the US from this point. The site was almost destroyed during the building of the Golden Gate Bridge, but engineers reworked the plans to build around it.

Today, the attraction is free to visit. It is also one of the best places to get some great shots of the Golden Gate Bridge. Click through for more pictures, history, and visiting tips for this military history museum.

>> Additional National Parks, memorials, and sites near SF and the Bay Area

The National Cemetery in located in the Presidio, an old military base on the northern side of the city. This is one of only a few cemeteries still within the city limits of San Francisco.

The first person was buried here in 1854. The US government designated it as an official military cemetery in 1884.

This is another one of the military history tourist attractions San Francisco that is free to visit. Click through for more information including pictures of the cemetery and visiting tips.

The SS Jeremiah O'Brien is an historic World War II Liberty ship. Its home is on Pier 45 in San Francisco's Fisherman's Wharf.

Built in 1943, it was sent off to war and survived, but then sat around for years. It was saved from demolition and rehabbed through donations from many other military history lovers. The ship is one of only two fully functional Liberty ships still remaining.

You can either visit it while its docked or get a ticket for a ride around the bay during one of its many special events. It's also one of the military history tourist attractions San Francisco included with the Go San Francisco Discount Pass.

If you plan on visiting, you can save money on your tickets with this attraction pass.

Angel Island is another historic military site. This island sits in the middle of the San Francisco Bay about a mile from shore.

During the Civil War era, in response to fears that Confederate sympathizers would attack the Bay Area, the US Army built a base here called Camp Reynolds in 1963. The base contained artillery batteries and an unofficial "water battery" on the wharf.

Today, two buildings at Camp Reynolds are open for visitors. Read on to discover a little more about the island, how you get there, and tips for getting over to the military history tourist attractions once you arrive.

The USS Pampanito is a World War II Balao-class submarine. Like the SS Jeremiah O'Brien, it was also built in 1943 and now calls Pier 45 in San Francisco home.

This historic submarine was responsible for patrolling the Pacific during World War II. During its six operations, it sunk several Japanese ships and damaged many others.

The USS Pampanito is now open to visitors every day starting at 9 am. A tour of the submarine takes around an hour to an hour and a half.

Most people now know the northwestern corner of San Francisco as Lands End, that rugged edge of the Pacific coastline whose trails overlook the Golden Gate Bridge and the Pacific entrance to the bay.

However, few visitors know that they're actually walking by one of the most important military history tourist attractions in San Francisco.

The military fortifications—including Battery Chester—date back to the late 1800s and are now largely overgrown. Today, the empty gun batteries that once had unobstructed views of potential attacks coming toward the bay are now covered in trees.

To add to the place's eerily abandoned character, the military fort had been constructed on top of a former cemetery called the Golden Gate Cemetery, City Cemetery, or the Chinese Cemetery.

7. Batteries in the Presidio

Because of the Presidio district's strategic coastal location, you'll find a swath of Endicott-era batteries in addition to the buried one at Fort Miley. One of these is Battery Boutelle, located near the Golden Gate Bridge toll plaza.

Battery Chamberlin, which sits at the north end of the Baker Beach parking lot, once housed four heavy-duty "disappearing guns," which used special technology to keep them hidden from attackers.

The guns were removed in 1920 for use in WWI, but since then, the National Park Service has installed a working 1905 replica and hosts free demonstrations on the first full weekend of every month from 11 am to 3 pm.

For a beautiful day outdoors overlooking the bay, you can now visit the newly inaugurated (2022) Battery Bluff, a 6-acre park near the Presidio tunnels that incorporates Slaughter, Baldwin, Sherwood and Blaney gun batteries.

This is a freeway-turned-'greenway' that now grants visitors access to these batteries, which have not been seen by the public since Doyle Drive was constructed in 1936.

The West Coast Memorial is one of the most solemn and serene military history tourist attractions in San Francisco. It is one of three monuments erected in honor of the lost American soldiers of WWII, the other two located in New York City and Honolulu.

Sitting on high ground overlooking the harbor, this curved granite wall sits amidst a forest of pine and cypress trees. It is truly magnificent and will make you pause to reflect. It contains 413 inscribed names of service members who never returned home.

You'll find the memorial at the intersection of Lincoln and Harrison Boulevards, also in the Presidio, not far from Baker Beach.

The USS San Francisco cruiser and its crew endured one of the most brutal close-quarters naval engagements of World War II.  At the 1942 Battle of Guadalcanal in the Pacific, it sustained 45 direct hits and 25 fires, and managed to make it back to port.

In honor of the more than 100 sailors lost in that battle, part of the ship's damaged bridge has been placed near Fort Miley at Lands End as a reminder of their valiant efforts. This memorial is certainly unique, as it speaks for itself better than any statue or sculpture could.

Battery Spencer is one of the San Francisco military history tourist attractions that is better known for its sweeping views than for its historic role.

It sits on the other side of the Golden Gate Bridge on a cliff 500 feet above the bay that offers incredible photo opportunities to visitors today. Back in the post-Civil War era, this Marin location was key for the battery's construction because of the excellent vantage point.

In addition to the stunning views, you can walk around the remains of the concrete structures that once housed weaponry and defense personnel for about half a century until the materials were stripped for use in WWII.

If you love military history, one of the best times to visit San Francisco is during Fleet Week. This is one of the largest annual events in the city and draws thousands of visitors.

Always held on the first weekend in October, the event offers you the chance to tour additional ships and see one of the best air shows in the country, featuring the Blue Angels.