One of the best things about San Francisco is the hidden gems you can find throughout the city. My favorites are the colorful and controversial Diego Rivera murals.

SF is home to three of his masterpieces including the first one he finished in the United States. Even though they are often referred to as murals, they are actually frescos. The difference is that frescos take a special skill set and are difficult to create, but the vibrancy of their colors lasts forever. 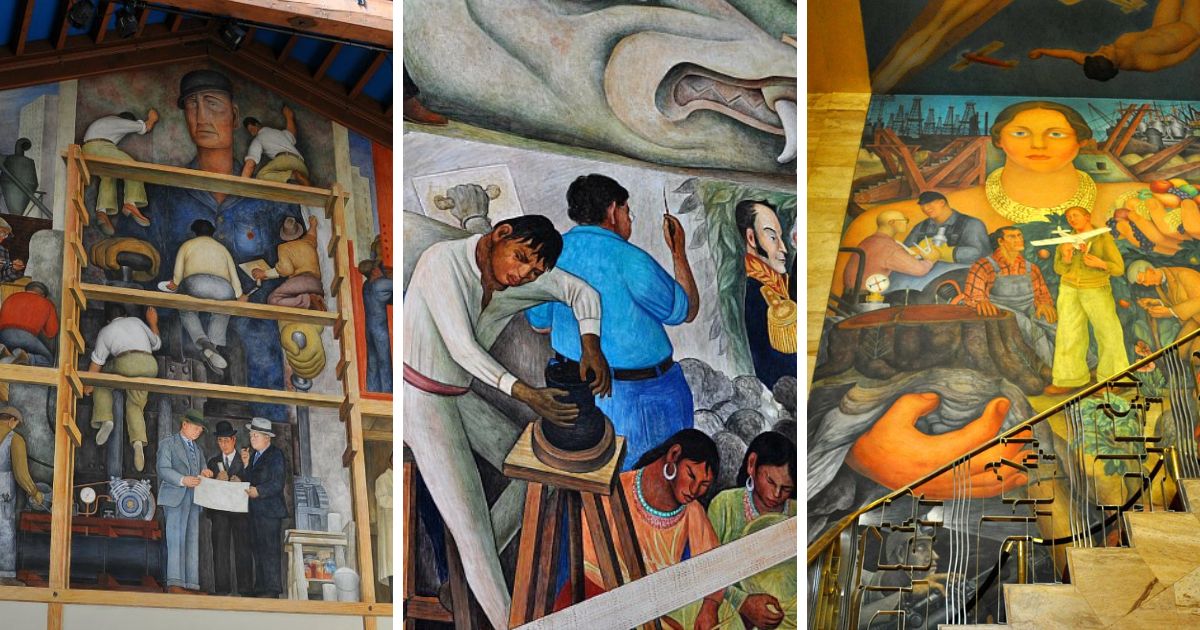 Who is Diego Rivera? 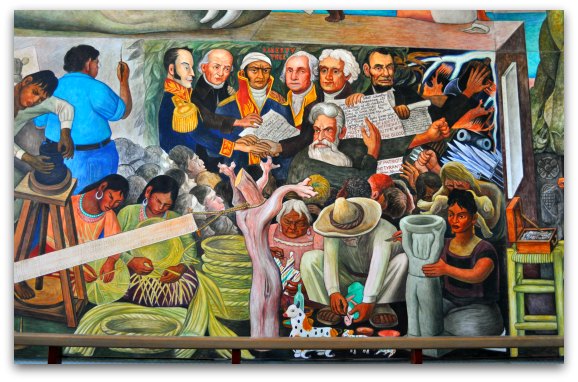 Diego Rivera (1886 - 1957) was a controversial, yet talented artist from Mexico. He was passionate about art, politics and love affairs. His commitment to the Communist party brought quite a bit of attention to him and his highly detailed works of art.

As a young artist, Rivera spend several years in Paris hanging out with other talented painters such as Pablo Picasso. He was an artist all of his life, but his time in Paris was instrumental to the direction of his famous frescos in the US and Mexico.

The most magnificent Diego Rivera mural in San Francisco is the piece entitled the Pan American Unity. This enormous work of art stands 22 feet tall and is 75 feet wide. It is made up of 10 panels and is the largest significant piece of work he did.

It is also the last official fresco he created in the US.

You will find this piece on the first floor of the San Francisco Museum of Modern Art. It is in their free gallery area, so you do not need to pay to see it.

It recently moved here in 2021 from the City College of San Francisco.

The great thing about its new location is that it will no longer be the least known piece of Rivera's in the city. Now that hundreds of people will be able to see it for free without having to book an appointment, it's going to turn into the most recognized piece he created in the bay area.

I've been telling people that they must go see this for years, but due to its location at the City College and the fact that they were open limited hours, few were able to see it.

I'm thrilled it's now easier to access so more people can enjoy it. 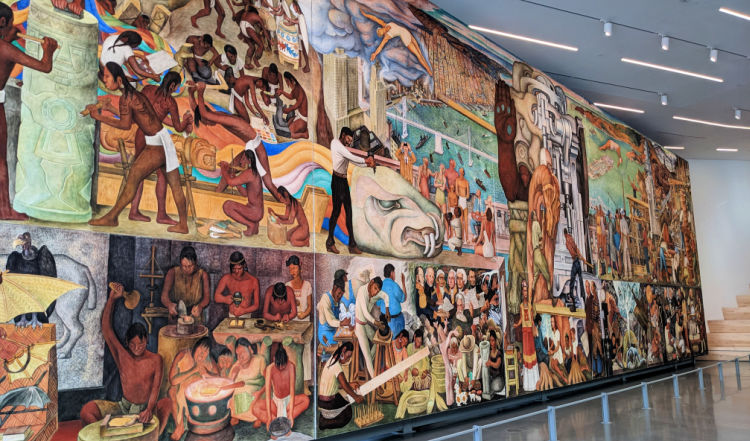 This is at its temporary home at the SF MoMa. 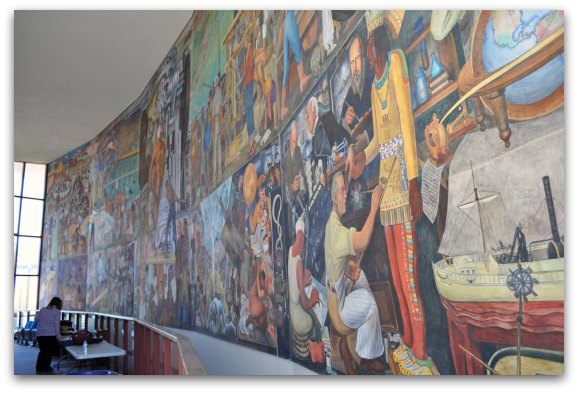 This is the same piece in the Diego Theater, where it was housed for decades.

Rivera was commissioned to complete this one during the Golden Gate International Expo on Treasure Island (less than a mile east of San Francisco). He arrived and started work on it in June 1940.

Even though the Expo closed in September 1940, he continued his work and completed it in December of that year.

At that time, they reopened the doors so everyone could look at the fresco. Shortly thereafter, it was put in crates where it stayed for 19 years. In 1961, the Diego Rivera Theater was built specifically to house it.

However, due to the inability to see the entire fresco in this theater, a new building is currently in the works.

Each of the 10 panels of The Pan American Unity tells a different story, but they all fit together perfectly. The stories in this piece include everything from Pre-Columbian Mexico to the players in WWII (which was in progress at the time).

Here are just a few pictures of the different sections of this mural. 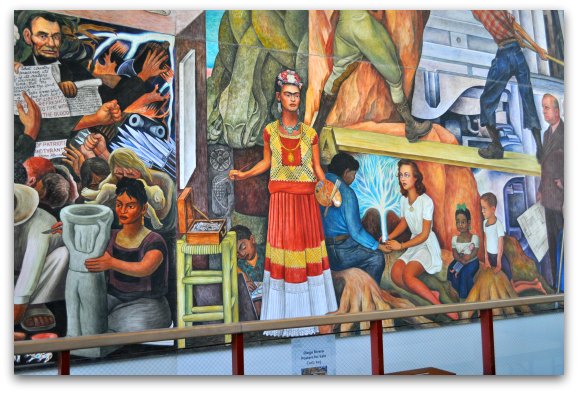 This part of his mural features his wife of many years, Frida Kahlo. 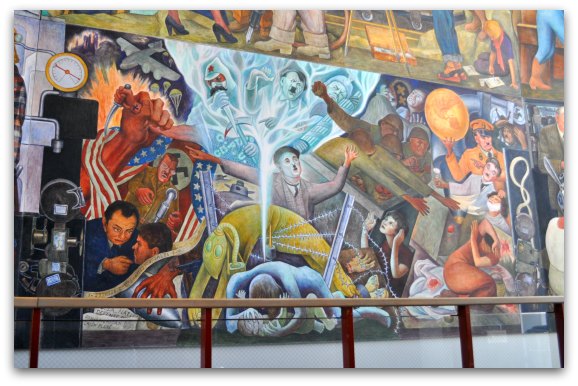 This panel is dedicated to some of the events and major people in WWII as of 1940. 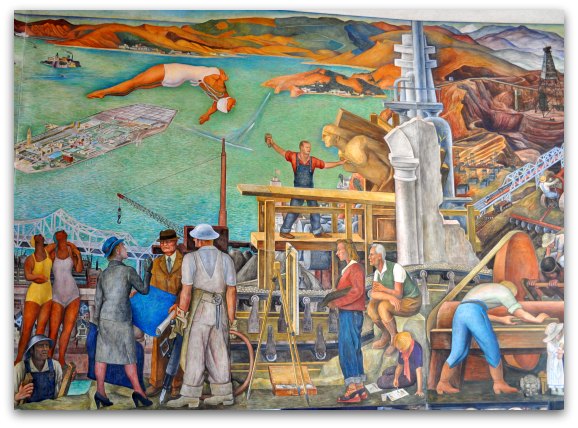 You will see quite a few things going on in this panel including a view from above of Treasure Island, which is where this mural was created.

Location & When to Visit: As I mentioned above, this mural is now located at the SF Museum of Modern Art in the SOMA District. It's located on the museum's first floor, where you can admire it for free. This Diego Rivera fresco will be on display at the SF MOMA through 2023 as a new building needs to be built at the City College before its able to return.

The Allegory of California is the first fresco Rivera finished in the US. He completed this piece in 1931.

You will find it adorning the grand stairwell in The City Club in downtown San Francisco. 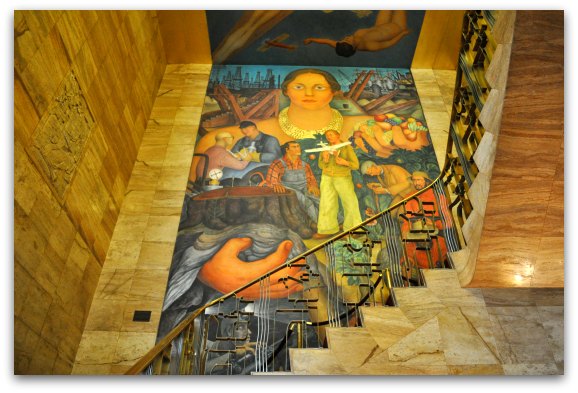 The main female figure is Calafia, the Spirit of California. The piece depicts the state of California at the time of its completion. It also includes well-known local and regional figures of the time.

Here is a close up of the right hand of Calafia. It gives you a closer look at the details of this piece. She is holding 'above ground treasures' found throughout the state at the time. 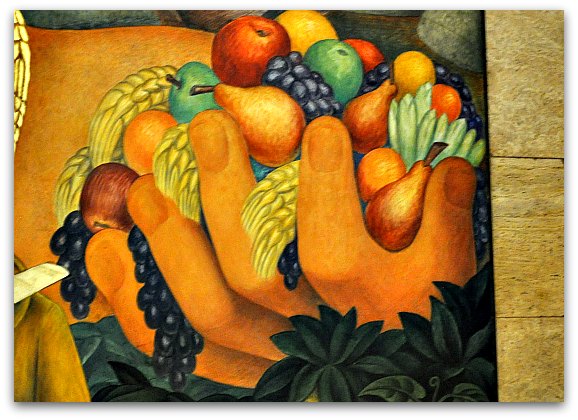 It's hard to catch in one picture, but this is an extension of the fresco onto the ceiling above the staircase. 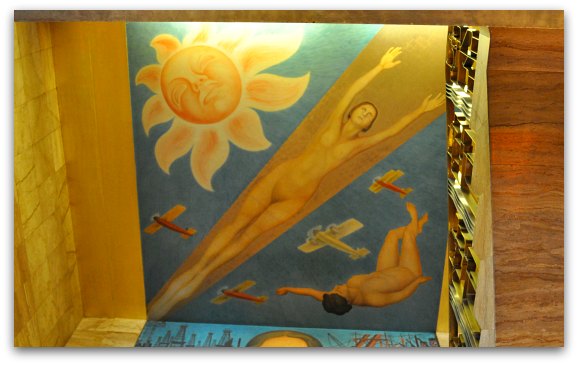 Location & When to Visit: This mural is located at 155 Sansome Street in downtown SF. You can see this mural on the first and third Monday of the month at 3pm. This is when CityGuides offers a guided tour of the mural and it's the only time it's open to the public. Please click here to visit the CityGuides site to make a reservation to see this mural. They don't always offer the tour, so it's best to check schedule to make sure it's on before you arrive.

The tour is free and they request that you do not wear shorts, tank tops, or sweats during the tour as you will be entering a high-end, private club.

The club used to allow anyone to walk up and ask to see the mural on their own, but this stopped a couple of years ago.

NOTE: The San Francisco Art Institute where this one is located closed it's doors in the Summer of 2022. This means access to this piece will not be available until they find a buyer or someone decides to reopen this gallery. I'll post updates here as I learn more.

This is the second Diego Rivera mural completed in the US. He completed this fresco in 1931. 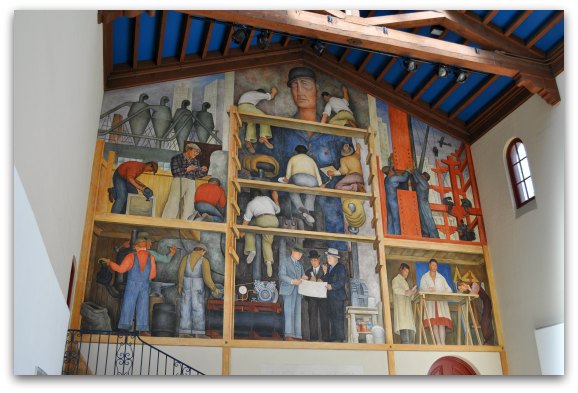 This SF mural sits in the Diego Rivera Gallery inside the San Francisco Art Institute near Fisherman's Wharf, Russian Hill and North Beach.

This one is considered a fresco within a fresco. It shows the painters in action as they build the fresco. You can see all of the artists, along with their scaffolding, layered on top of the masterpiece they are completing.

This one also includes the backside of Diego Rivera as he watches the artists work on the fresco below. 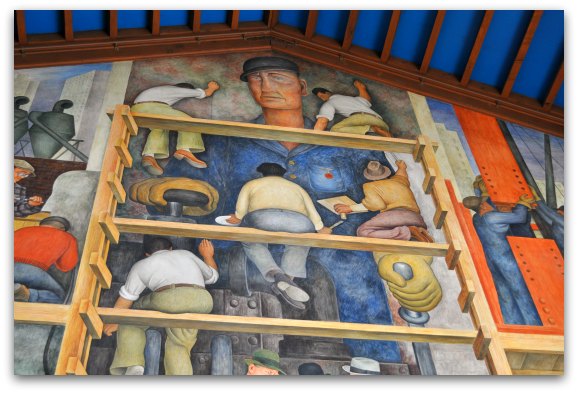 Location & When to Visit: This one is also open to the public every day between 9am and 7pm. The San Francisco Art Institute is at 800 Chestnut Street (between Leavenworth and Jones). Enter through the doorway shown in the picture below and take an immediate left. Walk to the end and take an immediate right. The Diego Rivera Gallery will be the first door on your left.

How to Get Here: You can easily walk from either Fisherman's Wharf or North Beach. It's also just a few blocks from the bottom of Lombard Street, the famous crooked street. 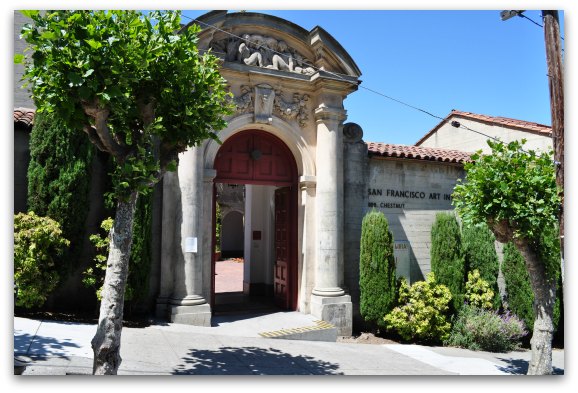