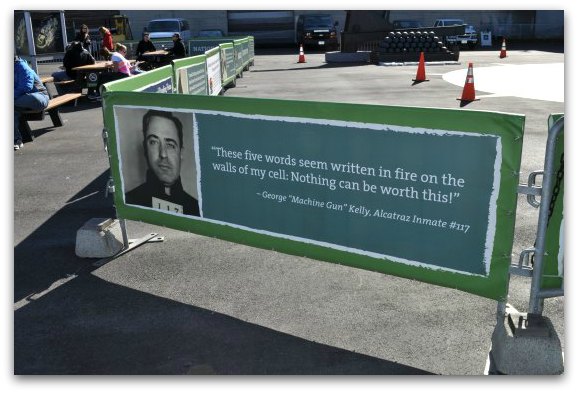 During my last visit, I found this sign in the ferry waiting area. I thought it was an interesting portrayal of how the worst of the worst felt about their time on the island!

Why did this prison have so many famous prisoners? The reason for this is that it housed the worst of the worst.

When the prison initially opened as a high-profile maximum-security federal prison, the most dangerous prisoners from around the system were sent here. During its time as a maximum-security prison, more than 1,500 of these prisoners spent time here.

Life as an Alcatraz Inmate

This prison was known for its strict rules and tough way of life. The staff worked hard to treat all prisoners the same.

Each prisoner had their own cell. From 1934 to 1937, the prisoners of Alcatraz followed a policy of silence. They were not allowed to communicate with other prisoners or guards unless they requested and received permission to speak.

Their tough schedule started at 7 am in the morning and ended at 9:30pm every night. Their day was scheduled out for them and they had the same routine every day.

The solitary confinement cells were located in the D block. The lights in this block were off at all times, making it dark and a really hard life for the prisoners.

Are you interested in visiting? Here are some great combo tours that include a visit to Alcatraz plus a second tour around SF.

Al Capone is one of the most famous prisoners of Alcatraz. Capone was on the first trainload of prisoners to the new federal prison located on Alcatraz Island.

In 1934, Capone became known as prisoner number 85. In true Capone style, he immediately tried to manipulate the system to get special treatment here. However, the warden noticed his attempts from day one and denied any special treatment.

Due to his fame, Capone was a target of attack. In 1936, another inmate stabbed him in the back with a pair of scissors. The other inmate thought he was a snitch and wanted to kill him. Capone's story is that he was stabbed because he wouldn't fund the other inmates escape attempt.

Robert Stroud, The Birdman of Alcatraz

Robert Stroud, the Birdman of Alcatraz, became one of the prisoners of Alcatraz in 1942. He was prisoner number 594. His fame as a birdman came before his days here. Due to the strict rules at Alcatraz, Stroud never had any birds in his cell during his time on the island.

By the time Stroud arrived, he was already 52. He had already spent most of his life in prison. Most of those years were in solitary confinement.

Stroud was a troublesome prisoner most of his life and this behavior continued while on the island. In 1948, he supported the efforts of a group of prisoners that tried to escape. In 1948, he also staged a hunger strike with the rest of the prisoners.

Machine Gun Kelly is another one of the infamous prisoners of Alcatraz. He is listed as inmate number 117. His full name is George Kelly Barnes.

Early in life, Kelly worked as a cab driver. He then found that a job as a bootlegger paid a lot more. His criminal fame grew during his second marriage to Kathryn Thorne.

She talked about his crimes to those in other crime circles. This created the famous profile of a criminal we know today.

Kelly raised the stakes of his criminal activity in July of 1933. His wife and he kidnapped a wealthy businessman and received ransom from the victim's family.

His wife and he then ran from state to state to try to avoid capture. Three months later they were both captured and eventually were sentenced to life in prison for the crime.

Machine Gun Kelly started his sentence in Leavenworth Penitentiary in Kansas. While he was incarcerated, he bragged that he would escape from the prison and then break his wife out of prison. To quickly take care of a potential issue, the warden scheduled a transferred for him here in 1934. Kelly then moved to Alcatraz shortly after the new prison opened.

In the beginning, Kelly talked and bragged a lot about his crimes to other prisoners of Alcatraz. He later became remorseful and began to take responsibility for his actions.

During this time, Kelly wrote letters to his victim to apologize for the kidnapping. He received no response from the victim. Kelly was considered a good inmate since he didn't create any additional trouble. Other prisoners documented that they enjoyed getting to know him while they were incarcerated together.

Kelly spent 17 years as one of the prisoners of Alcatraz. He transferred back to Leavenworth in 1951. He then died of a heart attack in 1954.

The murder case also highlighted the tough prisoner guidelines and rules for the prisoners of Alcatraz. In a sense, both Young and the Alcatraz prison rules ended up on trial.

Other prisoners consider Young as one of the toughest and meanest inmates ever to step foot inside its doors. He grew up very poor with parents that fought a lot. His parents broke up when he was only 14 which damaged him for life.

Young's life of crime began at the age of 17 when he began stealing. After years of crime, he was caught for robbing a bank with friends in 1934 at the age of 23.

Young received a 20-year sentence for the crime. He started his sentence at McNeil Island, but was so violent the warden asked to transfer him to Alcatraz.

He arrived at here in 1935 and was inmate number 244. His behavior got continually worse while he was one of the prisoners of Alcatraz. He tried to escape four years after his arrival. The escape attempt occurred with other inmates including McCain.

The tough interactions between Young and McCain are documented to have started after the failed escape attempt. Several run-ins between the two were documented before the final incident. In December 1940, Young stabbed McCain to death.

After the trial, Young continued to serve time here. He was mainly in solitary confinement but caused problems until he was transferred out of The Rock in 1948.

Young finished out his sentence and was paroled in 1972. He violated his parole by skipping a check in with his parole officer. Authorities searched and searched for him. He was never found or heard from again.

The movie Murder in the First chronicled Young's life and the trial for the murder of McCain. The movie portrayed him as a kinder, gentler person than what other prisoners documented about him in real life. This different representation created some question and mystery around his true life and character.

Are you ready to book your trip and learn even more about the prisoners of Alcatraz? This tour is one of the most popular for visitors. Not only do you get to visit the famed island, but you also get to tour all of the hot spots for the city of San Francisco.

This eight-hour tour takes by all of the popular San Francisco attractions. You will see the Golden Gate Bridge, Chinatown, Union Square and more. This tour sells out quickly, so make sure you get your Alcatraz and San Francisco City Tour tickets today!