Robert Stroud: Facts About the Life of the Bird Man of Alcatraz

Discover the facts about Robert Stroud, better known as "the Birdman of Alcatraz", who is just one of the many infamous prisoners of Alcatraz.

There is also some confusion about the details of the bird man of Alcatraz's life in prison. Read on to learn the truth about his life, why he was incarcerated, where he stayed while serving his sentences, and if he actually had birds in his cell at Alcatraz. 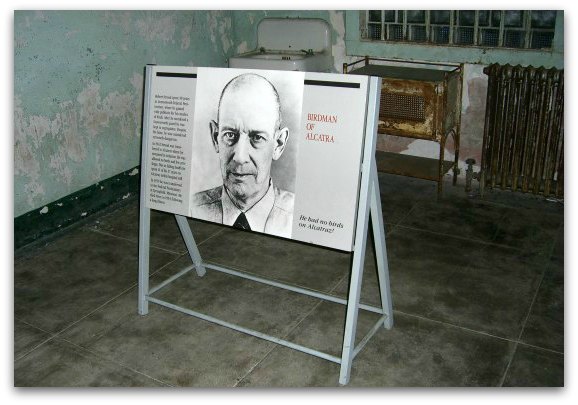 A sign in one of the medical rooms at Alcatraz where Stroud spent many weeks after he became ill.

Stroud was born in Seattle Washington in January 1890. He was the third of four children.

Violence was part of his life from day one. Robert's father was against his birth from the very beginning.

The hatred toward his third child was evident and this brought Robert and his mother closer together. His father's resentment toward Robert as they became more and more connected.

His father also began to abuse him at a young age. Stroud decided he wouldn't put with the abuse and at thirteen he ran away from home.

For three years, he begged for money and lived with other homeless people as a hobo traveling around Alaska. He returned home in the state of Washington at the age of 16. Less than two years later, he left again for his beloved Alaska at the age of 18.

While he was working there, he fell in love with a prostitute, Kitty O'Brien. This is where his life of crime began.

First Crime and the Beginning of Life in Prison

Stroud started working at age 18 as a railroad construction worker in Alaska. There was a prostitute, Kitty O'Brien, who worked at a local bar in Cordova, Alaska. There are questions about whether Kitty and he were in love or the other story is that he was her pimp and he didn't love her at all.

On a trip back to Juneau, Stroud and Kitty met an old friend, Charlie Dahmer. They all went out to have drinks and dinner. When Stroud left to do some work, Dahmer supposedly beat up Kitty and stole some of her jewelry. Right after doing this, Dahmer left and then Stroud came home and saw how Kitty had been beaten up and robbed.

After learning of this, Stroud did something that would then continue during his life: He decided to kill Dahmer for his actions. He hunted him down, found him, and then shot him to death.

Interestingly enough, right after he killed Dahmer, he went to the police and turned himself in without any issues and simply telling them that they had argued over money. So as to if it was love or money, I would guess it was the money he loved more than Kitty.

After being convicted of manslaughter, Robert Stroud started his term in prison at McNeil Island Federal Penitentiary in Washington State. He quickly became known as a troublesome inmate.

While serving time at McNeil, he stabbed another inmate. The reason he gave for the stabbing was that the other prisoner snitched on him for taking food to his cell.

At the time, Leavenworth was known as one of the toughest prisons in the US. No matter what, Robert Stroud's criminal career still continued behind bars. While he was incarcerated there, he stabbed and killed a guard.

There are conflicting stories on the reason behind this killing. His story is that he was harassed by the guard. Other prisoners that wrote books about their experiences in Leavenworth confirm this theory.

However, Leavenworth has no documentation about bad blood between the guard and Stroud. Their official conclusion is that it was a random act of violence by Stroud due to his anger issues.

Stroud was sentenced to death for the stabbing death of the guard. His mother tirelessly pleaded to get his sentence commuted to life in prison.

Finally, President Wilson listened, and Stroud's sentence was converted to life in prison. The warden at Leavenworth interpreted the life in prison sentence as a life in solitary confinement sentence.

In Leavenworth, Stroud decided that being alone meant he could start learning and began to take classes. He took them through the mail from a number of schools and he was known for being a genius. He took a 10-month class on higher mathematics and was done in only 4-months. He also learned German and French. He basically read everything he could and learned whatever was allowed including law.

While he was incarcerated at Leavenworth, Robert Stroud became interested in birds, specifically canaries. It all started one day in 1920 during his one hour a week walk in the yard.

Stroud found a couple of injured birds and picked them up. He talked the guard into letting him take the birds to his solitary confinement cell and help them mend.

He then received permission from the warden to keep the birds and help others when needed. His passion grew from there. He began to build cages to treat other birds.

Since he was in solitary confinement and was only allowed out one hour a week, he spent 100% of his time with the birds. During this time, Stroud leaned a lot about them and how they lived and survived. 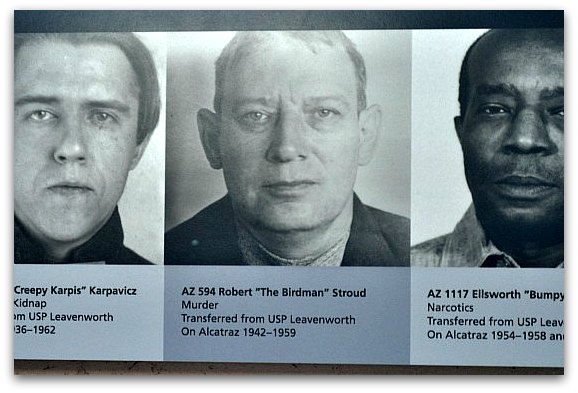 Stroud's official mugshot from Alcatraz - this is on a sign on the island alongside the other infamous prisoners that spent time here.

He also began to write and study their diseases. He even got permission from the warden to set up a second cell next to him to expand. The prison cut a walkway between the two cells, so he could go back and forth as much as needed. He ended up with over 300 birds that all lived in cigar boxes in an adjacent cell.

He also created medical treatments for the birds and started breeding them. Stroud actually made a decent amount of income from this and this made the guards and warden jealous.

He also met Della Mae Jones, who moved to Kansas to help start a business with Stroud to sell the medicines to other customers. During this time, the warden didn't want Stroud around anymore, but Stroud didn't want to leave his birds so he and Della Mae got married. Since Stroud had studied the law, he knew that the state could not move a married prisoner out of state.

As you can imagine, the warden was not a fan of Stroud. In 1931, the warden had enough and worked to stop Stroud's bird business.

After a lot of debate, the warden lost the battle and Stroud was granted permission to continue his studies. People outside the prison continued to support Stroud's efforts and even donated equipment to him.

With all of this happening, Robert Stroud also published his first book while at Leavenworth. The book was called "Diseases of Canaries."

However, during this time he was suspected of making alcohol while doing his work on birds and the warden finally found a way to get him sent out of state and transferred to Alcatraz Island.

Finally, in 1942, Robert Stroud was transferred to Alcatraz Island. The rules here were very different and a lot stricter.

Stroud was simply prisoner number 594. At this prison, Stroud was not able to continue his hands-on bird business or research. Unlike many of the stories and history people have made up, he never had any birds in his cell here.

By the time Stroud arrived here, he was already 52. He had spent most of his life in prison. Most of those years were in solitary confinement.

Even though he no longer was able to have birds, he kept doing research on them. In 1943, still a prisoner of Alcatraz, Stroud published his second book. The book was titled Stroud's Digest on the Diseases of Birds. 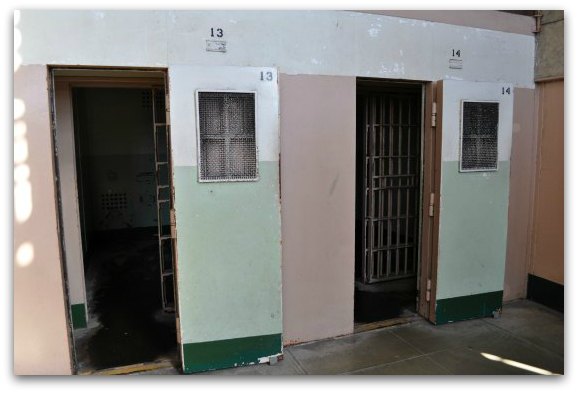 Two of the solitary confinement cells on the island - the area where Stroud spent much on his time in this prison.

Even as Stroud was focusing a lot of his time on his research, he still couldn't stay out of trouble. In 1948, he supported the efforts of a group of prisoners that tried to escape from the island.

He did this by donating money to their defense. In 1948, he also staged a hunger strike with the rest of the prisoners.

He was such an interesting person, since he could be so evil, and yet so good, at the same time.

Learn more about the Birdman of Alcatraz on one of these combo tours.

In 1959, Robert Stroud was transferred out of Alcatraz. He moved to the Medial Center in Springfield, Missouri.

He died quietly in his sleep in 1963 at the Medical Center. Stroud was 73. A few days later, he was buried in the Masonic Cemetery in Metropolis, Illinois.

In 1962 while Stroud was still alive, a movie about his life called the Birdman of Alcatraz was released. It starred Burt Lancaster as Robert Stroud.

Stroud was never able to see the movie, since prison rules prohibited it. According to the laws in Alcatraz prisoners couldn't watch or read any stories that include violence or crime.

Some of the controversy around Stroud's life and confusion around the real Robert Stroud are due to the movie. The movie portrayed him as a kind, gentle bird lover.

I've also read several accounts and descriptions of Stroud from inmates that served with him. All of them confirm that he was a very violent man. Many also refer to him as a sociopath who deserved most of the treatment he received.

Unlike many of the other convicts, such as Al Capone who were already famous for their actions, the Birdman only really became famous for what he did after he was incarcerated.

Fun Fact: The famous actor, Burt Lancaster, who was the actor playing Stroud, met with him at Alcatraz after the movie came out in the theaters.

Biography of Al Capone: Learn more about the life and down fall of the most infamous prisoner of Alcatraz, Al Capone. Here you can learn more about why he went to prison, how he ended up in Alcatraz and where he lived out his final days.

Prisoners of Alcatraz: Discover what it was like to be a prisoner of Alcatraz. In addition, you can learn more about two of its other famous prisoners - Machine Gun Kelly and Henri (Henry) Young.

Escapes from Alcatraz: How many prisoners tried to escape from Alcatraz? What are the most famous escape attempts? Uncover the answers to these questions and more.

Alcatraz Prison Tours: How are the day and night tours different? Find out more about each one and use these helpful tips to determine which one is right for you.

Visit Alcatraz: Do you already have your tickets? If so, it's time for a few tips for your trip from taking the ferry to making the most of your time on Alcatraz Island.