City Hall in San Francisco: What to Expect When You Visit this SF Landmark

City Hall in San Francisco opened in 1915. It replaced the old City Hall building destroyed by the 1906 earthquake.

This ornate building sits in the city's Civic Center district. Since it is a public building, everyone is welcome and can visit it free of charge. 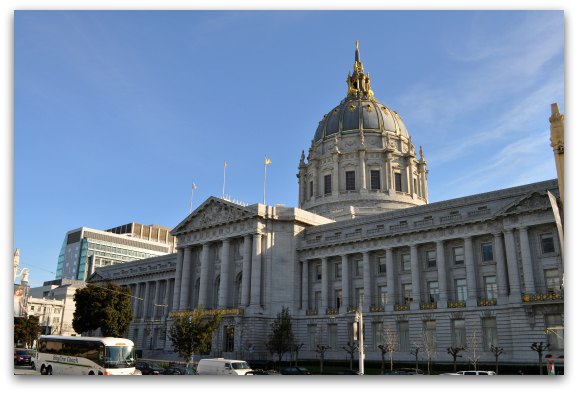 The building is massive and spans more than two city blocks. It has more than 550,000 square feet of space inside.

One of the most striking elements to this building is its large, golden dome. The dome sits 307 feet above the ground, making it the tallest dome in the US.

Fun Fact: Many people think the US Capitol building has the tallest dome in the US. That one is 288 feet tall - 19 feet shorter than the SF City Hall dome.

The dome is just as amazing on the inside. There are many different details both inside and around it. 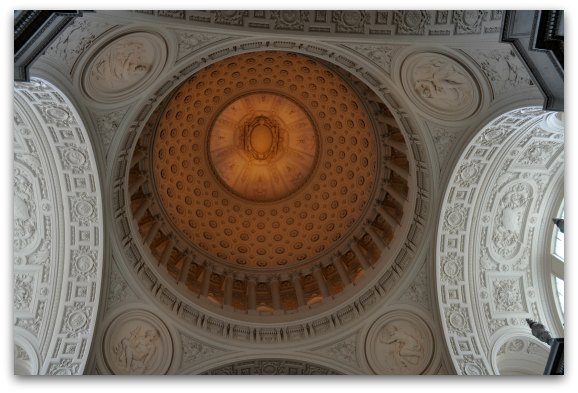 The Roman columns that surround the dome allow light from windows to enter this area. The four round medallions around the dome were created by sculpture Henri Crenier.

Just below this massive dome is another masterpiece - the gorgeous marble staircase. 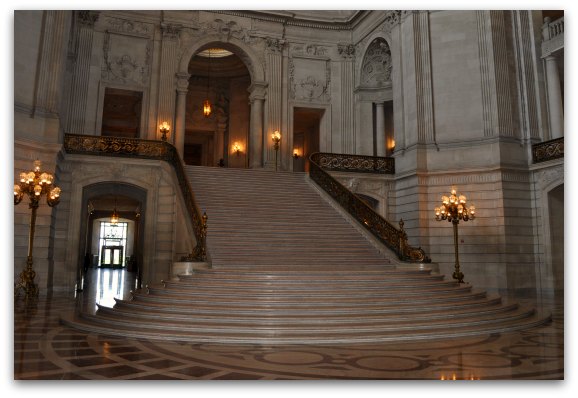 There are 42 marble stairs and they lead to the Board of Supervisors Chambers on the second floor. In 2003, Mayor Willie Brown dedicated the Grand Staircase in honor of Charlotte Mailliard Shultz.

She hosted many important celebrations in this area of City Hall during her time as Chief of Protocol in San Francisco.

This is a look at the intricate detailing at the stop of the Grand Staircase. 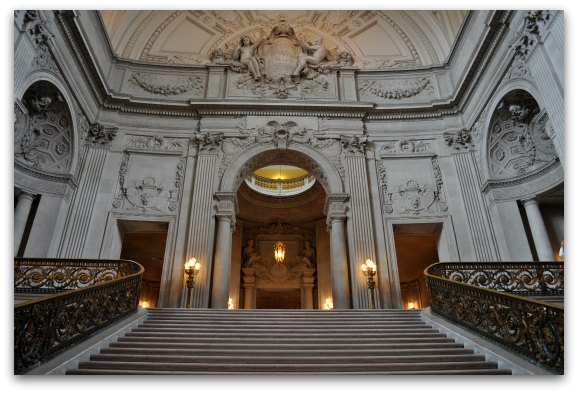 Under the dome at the top of the stairs is where many people get married. This small area offers a little bit of privacy in this otherwise busy building.

Fun Fact: The wedding of Joe DiMaggio and Marilyn Monroe took place here. DiMaggio grew up in SF's North Beach neighborhood. The couple is famous for taking a picture outside Saints Peter and Paul Church in North Beach after their courthouse wedding (in an attempt to show his family they got married in that church).

Another beautiful part of this area of City Hall in San Francisco is the floor. The detailed pattern is made out of pink marble.

It's hard to see its beauty from below, so head up the stairs to the second floor for the best view. 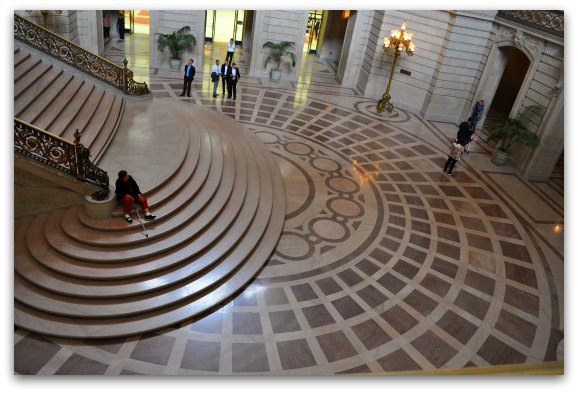 From the second floor, you also get a great view of the Father Time sculpture (at the very top of the picture), inscription (in the box right below him) and clock. 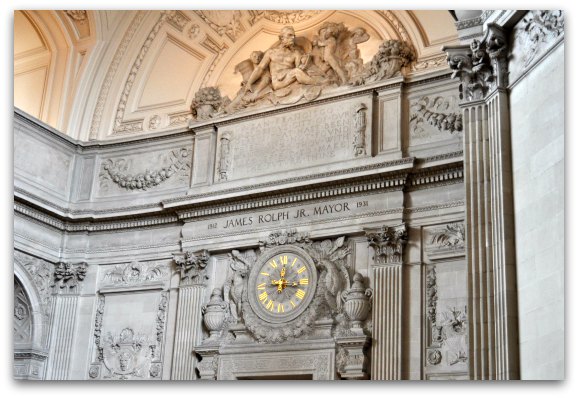 After being the Mayor of SF for almost 19 years, James Rolph Jr. Mayor asked the Board of Supervisors if he could add his name above the clock. They voted and the answer was no.

Rolph decided not to take no for an answer. So, over the weekend, he hired people to add his name into the limestone. Once it was done, there was no way to remove it. This is why Rolph is the only mayor to have his name inscribed in the wall within City Hall.

History of the 2nd Floor: The Deaths of Supervisor Milk & Mayor Moscone

As you roam around the 2nd Floor of City Hall in San Francisco, you will encounter three important statues. One is of Harvey Milk and it is at the top of the Grand Staircase. Milk was the first openly gay SF Supervisor. 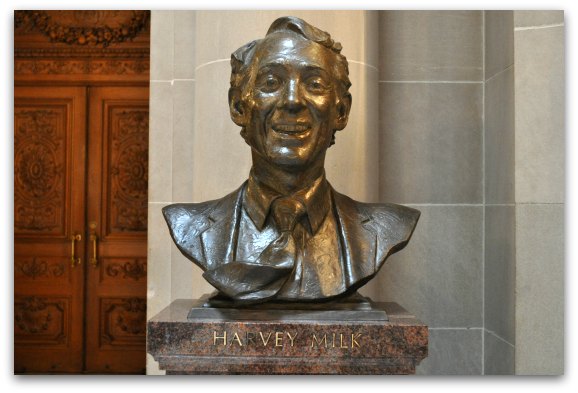 The other two are of George Moscone and Dianne Feinstein. These two sit near the entrance of the Mayor's Office across the Rotunda from Milk. 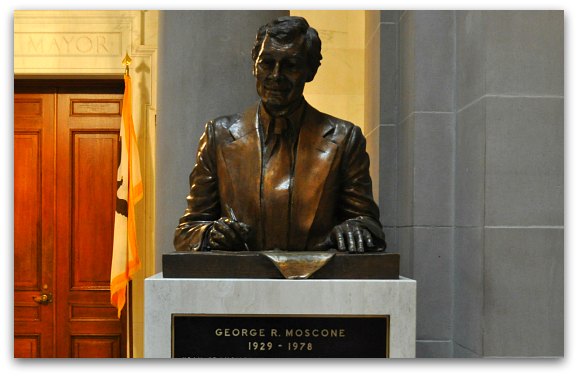 In 1978, a conservative, ex-San Francisco Supervisor by the name of Dan White requested his position back from Mayor Moscone. After a short meeting, Moscone denied his request.

White returned home, picked up his loaded gun and returned to City Hall in San Francisco. He entered the building through the basement windows in order to avoid the metal detector.

Authorities arrested White and tried him for both murders. His lawyer used the defense that White had too much sugar in his system, which caused him to kill both men. It was soon dubbed the 'Twinkie Defense'.

The jury sentenced White to just 13 years for both murders. He was out in five due to good behavior. Shortly after White got out of jail, he returned to San Francisco and committed suicide.

At the time of the murders, Feinstein was the President of the Board of Supervisors. She announced the news to the press and the citizens of San Francisco. Due to her position, she then became the Mayor of SF. She was then reelected. She then went on to become a US Senator representing California.

Learn More: One of the best ways to learn even more about this tragic event is to watch the movie Milk. Sean Penn portrays Harvey Milk and the movie does a great job in capturing what happened during this fateful day in City Hall. Find options to watch it on Amazon.

After you've spent some time in the Rotunda and the second floor, head to the South Light Room on the first floor. It's on the south side of the Grand Staircase. 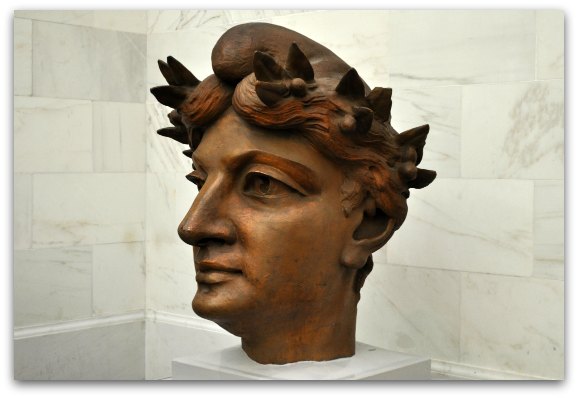 The head in the picture above is my favorite piece in this mini museum. It is from a twenty-foot statue on top of the dome of the last City Hall in San Francisco.

As I mentioned above, that building collapsed. However, the statue was so secure, that it stayed in place until contractors tore that building down in 1909.

In transport, this 700-pound head broke away from the body. To this day, no one is sure what happened to the body, so only its head is on display.

On the ground floor of City Hall in San Francisco, you will find art exhibits presented by the SF Arts Commission. During my last visit, this area displayed a photo journey of the building of the new Oakland Bay Bridge.

Make sure you head down there during your visit to check out the gallery on display.

City Hall in San Francisco has a lot to offer its visitors. You could spend anywhere from 30 minutes to two hours checking out its beauty.

Since it's a public building, you are welcome to enter and roam around on your own. It is open Monday - Friday from 8 a.m. to 8 p.m.

If you want to learn even more about City Hall in San Francisco, then you can also take one of these guided tours.

The Colorful Lights of City Hall in San Francisco

From time to time, you will catch this gorgeous building lit colorfully at night. They change the lights often to celebrate holidays, important events both in San Francisco and around the world, and also our local sports teams.

Here are just a few pictures I've taken of it over the years and the meaning of each one. 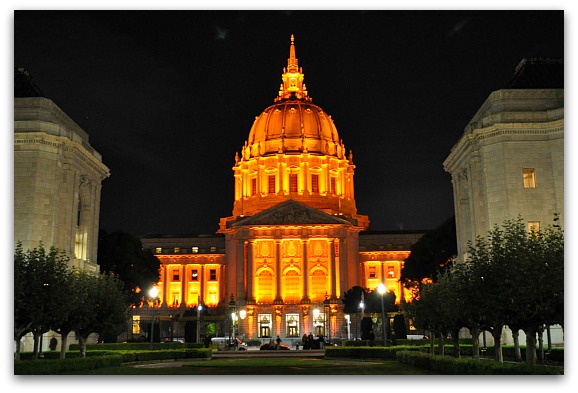 City Hall in San Francisco is often lit up to support our local sports teams. When it's in orange in October (like the picture below), it's in support of the SF Giants baseball team. This was taken during their last time in the World Series.

If it's in blue and yellow in May or June, it's in support of the Golden State Warriors. Red and gold in January or February is in support of our San Francisco 49ers. 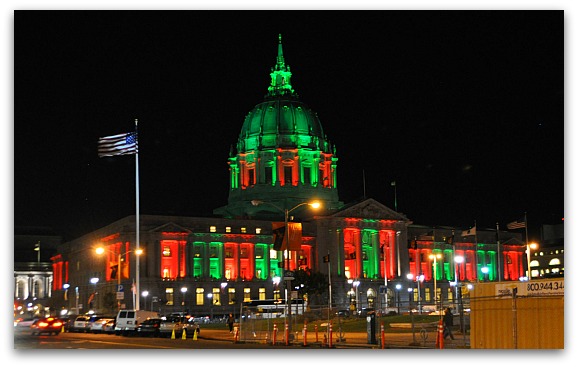 In December, City Hall in San Francisco is red and white for Christmas. You will find it in green for Saint Patrick's Day. 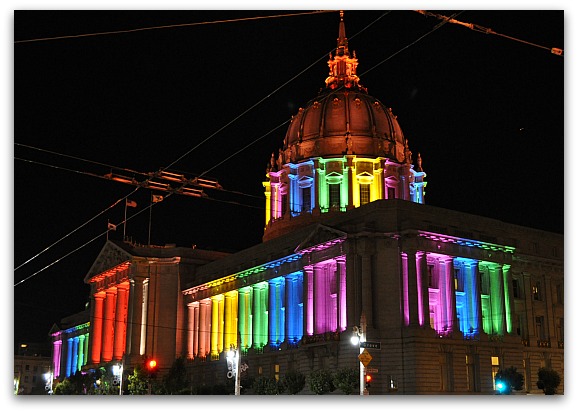 Other color changes include purple when Prince died, blue and purple to support the end of violence, and pink in support of women's rights.

These are the most common colors you will find on City Hall in San Francisco. However, they do add or change colors at other times when certain events or situations arise.

Tips to Get Here

It's easy to get here from anywhere in the city.

The easiest way to get here from Union Square is to take one of the underground Muni trains. Hop on any outbound train and take them one stop to the Civic Center station.

After exiting the station, you will walk two blocks to City Hall. This will take less than 10 minutes.

You will need to take the bus from Fisherman's Wharf. The 49-Caltrain bus picks up along Van Ness Street at North Point. Take this all the way to Van Ness and McAllister, which is just across the street.

This will take about 25 minutes.

>> Find additional tips for getting around SF