Beat Museum in San Francisco: Discover the History of the Beatnik Generation in North Beach

The Beat Museum in San Francisco covers the history of the Beat (also called Beatnik) Generation. This small attraction includes a number of original works of art, writings and other pieces of memorabilia from this generation of artists. 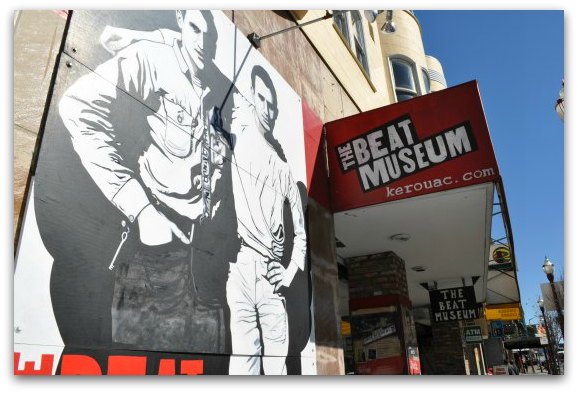 Who Was the Beat Generation?

They were a group of young artists, poets and writers in the 1950s. They lived a life that was considered alternative and radical at that time. Many of their works also didn't follow the more conservative rules of the 50s.

Most of the artists grew up on the east coast. However, many of them moved to San Francisco in the 1950s. Even at that time, the city was known for its acceptance and tolerance, which is what this group needed to continue their work.

Up their arrival, many of them settled in North Beach. At the time, it was where many other famous writers lived.

Three of the most famous people of this generation include Jack Kerouac, Allen Ginsberg and Lawrence Ferlinghetti. Other famous Beatnik artists include William S. Burroughs, Ken Kesey, and Neal Cassady.

Many of the members in this generation stayed in or spent a lot of time in this neighborhood for a number of years. Once it became too busy, they moved to the Haight Ashbury district. The group eventually turned into the hippie generation of the 60s and 70s.

About the Beat Museum in San Francisco

A visit here will take about an hour to an hour and a half. It's the best place to learn more about the Beat Generation.

You will find it on Broadway Street near Columbus Avenue. Here is a map showing its location. 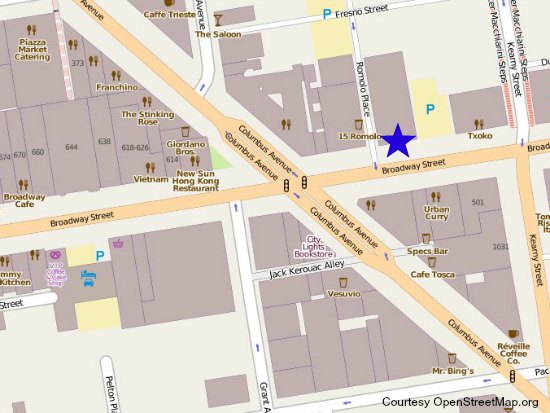 You can buy your tickets once you arrive. They are $8 for adults and $5 for seniors, educators, military, and students with an ID.

Admission to this museum is also included with the Go City pass.

This attraction discount card includes admission to many other top SF museums such as the California Academy of Sciences, the de Young Museum and the Aquarium of the Bay.

The best thing about this card is that you can save up to 50% off the admission to more than 25 bay area attractions.

What to Expect at the Beat Museum in San Francisco

The Beat Museum in San Francisco is small. However, it includes the most comprehensive display of memorabilia for the Beatnik generation in the world.

The front part is a bookstore. You will need to enter the bookstore to find the entrance. This is also where you will buy your entrance tickets.The first floor includes several poems, pictures and articles about the Beat Generation. 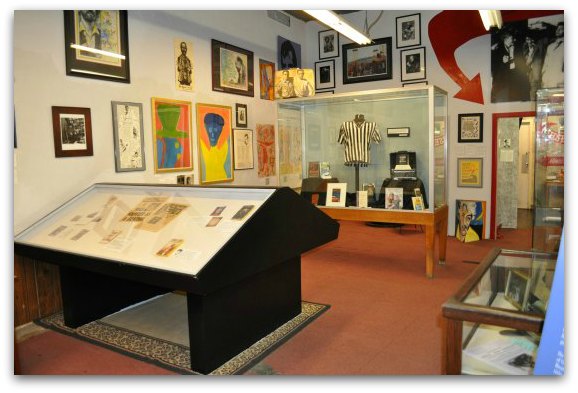 Here you can also see the original work by Jack Kerouac called The Visions of Cody. The book was not published until the 1970s. 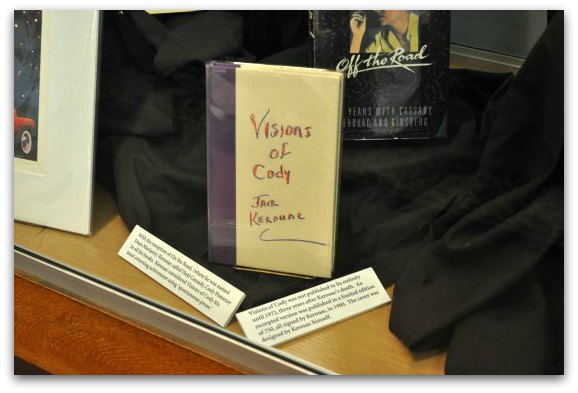 The first floor of the Beat Museum in San Francisco also has a small theater. The video in the theater runs continually and gives you more information on the people of the Beatnik generation. 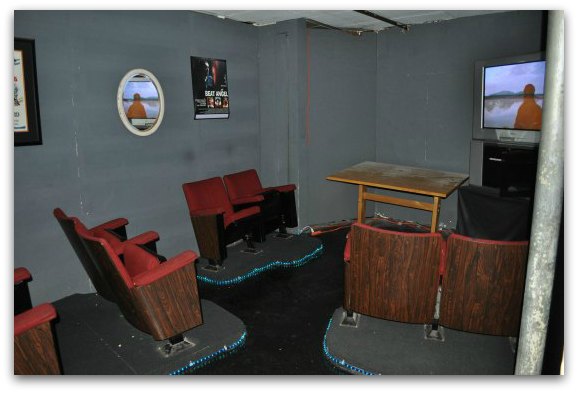 After you watch the documentary, you will head up the stairs to visit the rest of the museum. 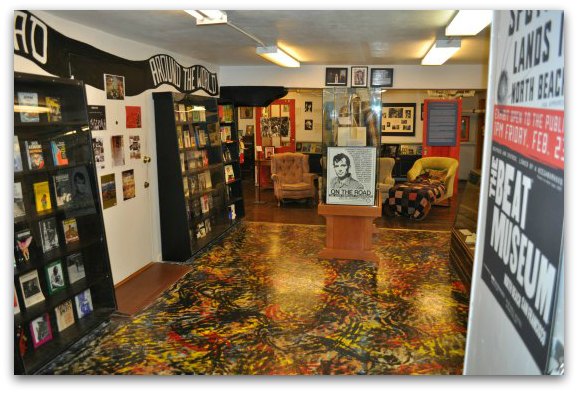 This is where you will see a display of the books written by this group and learn more about the women of this generation. 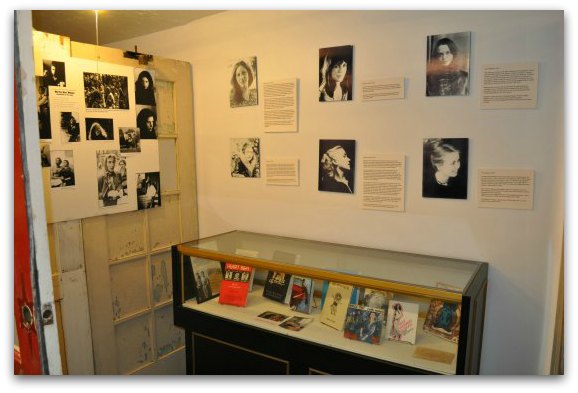 You will also learn all about the famous Six Gallery poetry reading that officially kicked off this generation of artists.

This is the last exhibition area. From here, you can head back downstairs to the bookstore. The bookstore is also dedicated to the Beat Generation. This is where you can buy books written by or about this group of artists. 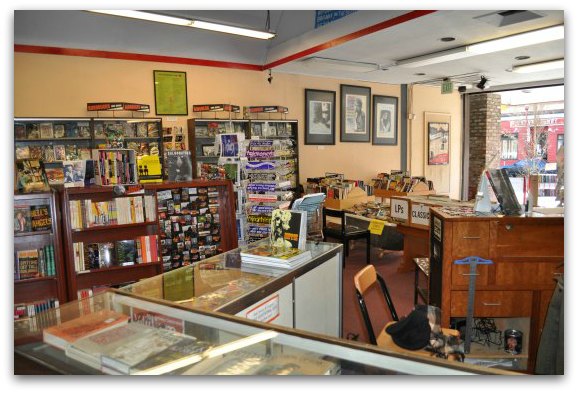 Before you leave, make sure you also check out the dusty car sitting in the bookstore. It's a 1949 Hudson that was used in the screen adaptation of Jack Kerouac's book 'On the Road'. 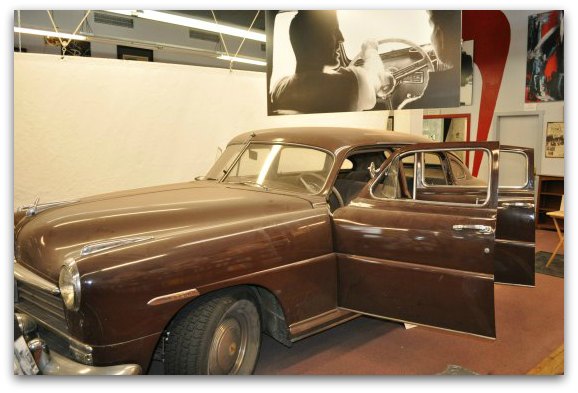 Why is it so dusty? The director of the film, Walter Salles, gifted the car to the Beat Museum in San Francisco. His only request was that they leave the dirt and grim on the car that was accumulated while making the movie.

In addition to the Beat Museum in San Francisco, you can also stop by some of the Beatnik Generation's favorite haunts in North Beach. They are all within just a few blocks of each other.

City Lights Bookstore: This famous independent bookstore is owned and operated by one of the Beat Generation's most famous authors, Lawrence Ferlinghetti. He started the bookstore in 1953 as a way for Beat and other non-mainstream authors to continue to get their writings out to the public. The bookstore is still running strong and you are welcome to visit them at 261 Columbus Street.

Vesuvio Cafe: The Vesuvio Cafe is right next door to City Lights Bookstore. It was a popular hangout for many in the Beatnik Generation and was a frequent stop for Jack Kerouac. They haven't done much to change it over the years, so you will get a great feel for what it was like when this generation hung out here. You will find it at 255 Columbus Ave.

Jack Kerouac Alley: Between City Lights and the Vesuvio is a small alley that was named after Jack Kerouac. The alley includes a couple of murals and some plaques in the street with quotes from several Beat Generation authors. The alley is one block long.

Cafe Trieste: Another favorite stop for the Beatnik Generation was Cafe Trieste. Several authors that lived in North Beach would meet here to write and hang out. Some of the most famous ones included Lawrence Ferlinghetti, Jack Kerouac, and Allen Ginsberg. Today, this coffee shop still serves up some of the best coffee in town and is a perfect place to spend some time during your visit. You will find it about a block from these other locations at 601 Vallejo Street.

About Six Gallery in San Francisco

You will learn quite a bit about the importance of Six Gallery at the Beat Museum in San Francisco. You are also free to stop by this location (3119 Fillmore Street) which is no longer a gallery, but instead retail space.

On Friday, October 7, 1955, five young poets that were not well known took the stage to read their works. This is the first time that Allen Ginsberg read his poem "Howl" to a live audience.

The audience loved the poem, but to many others it was deemed as offensive. After the reading, Lawrence Ferlinghetti contacted Ginsberg to publish the piece. Once it was available to the public, Ferlinghetti and his publishing manager were arrested for distributing obscene materials.

Their trail drew international attention and the judge ruled the work was an important piece of literature.

The publicity from the reading and the case is how the popularity and awareness of the Beatnik Generation exploded. Make sure to spend a little time at this part of the Beat Museum in San Francisco to learn more.

You can also stop by 3119 Fillmore Street to check out the plaque on the sidewalk dedicated to Allen Ginsberg and his reading at Six Gallery. 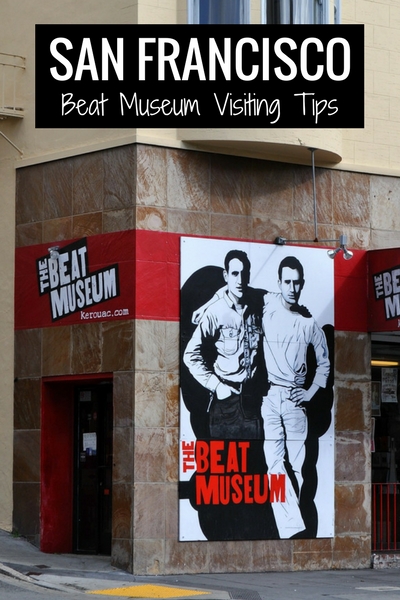 Other Things to Do in North Beach