The Nob Hill San Francisco is a popular neighborhood in the central part of the city. Top things to do here including activities at the Nob Hill Masonic Center, bars, restaurants, and shopping.

Other highlights here include the cable car that runs along California Street, Grace Cathedral, and the Cable Car Museum.

It's also home to several luxury hotels including the Fairmont, the Intercontinental Mark Hopkins, and the Scarlet Huntington. Each of them hold an important place in San Francisco history. 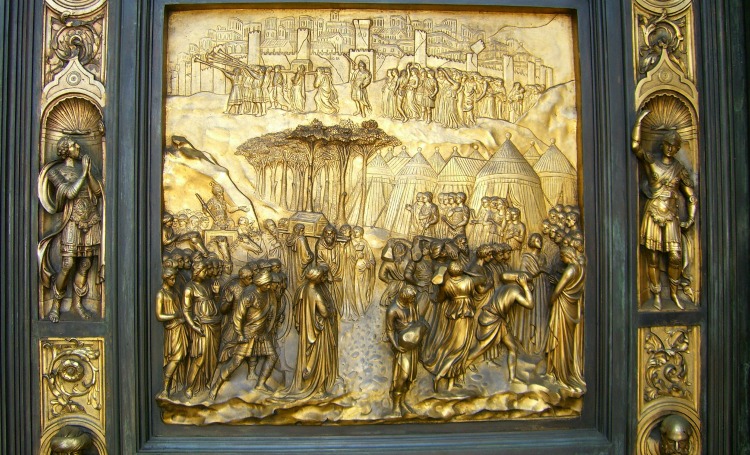 The "Big Four" were four famous San Francisco railroad entrepreneurs who built their mansions on the top of Nob Hill San Francisco in the late 1800s. They were the first to build in this neighborhood. Three of the four mansions burned down in the 1906 earthquake and fire. One of the mansions still stands today and is at the corner of California and Mason Streets.

Where is Nob Hill? The borders for this district are Broadway Street on the northern end. It's southern end is Bush Street. On the east, this district ends at Powell Street and on the west it ends at Van Ness.

It's neighbors include Russian Hill on the north, Lower Nob Hill to the south, Chinatown to the east and Pacific Heights to the west.

Things to Do in Nob Hill San Francisco 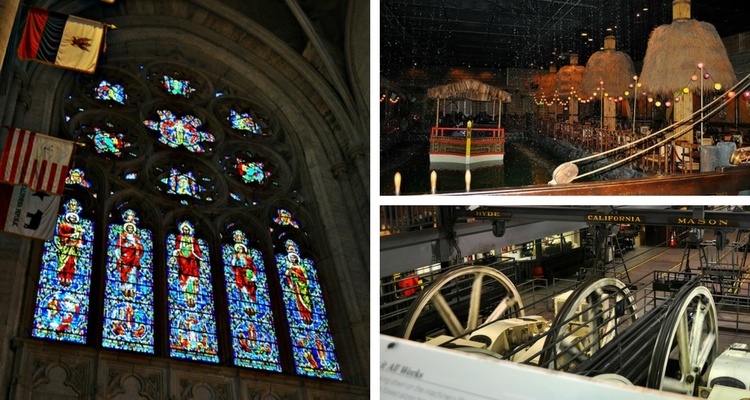 The California Cable Car line was the first line built. It's one of my favorite routes, since it isn't as busy as the other two lines.

It runs up and down the steep California Street roadway from the Financial District to the western edge of Nob Hill.

It also stops right next to Grace Cathedral and other attractions in this neighborhood.

>> More about riding the cable car through Nob Hill

Hop On Hop Off Bus: Another way to get to Nob Hill San Francisco is on the Hop On Hop Off Bus Tour. This tour offers 40+ stops around town including Fisherman's Wharf, Chinatown, Haight-Ashbury as well as this district. Learn about the popular tour.

In addition to riding the cable cars, you will also find the cable car museum in Nob Hill San Francisco. Here you can learn more about their history and see pictures of when the lines and cars were first built.

My favorite part is watching the wheels pull the cables. It's always hard to believe that these are the actual cables that keep the cars running up the steep San Francisco hills as you watch them turn.

>> Tips to visit this free museum

Tickets to Our Popular Museums

3. See the Lobby at the Fairmont Hotel

The Fairmont Hotel is an historic hotel in Nob Hill San Francisco. Built in 1907, this luxury hotel has hosted dozens of presidents, celebrities, and other famous people.

This is also where the United Nations Charter was drafted in 1945 (the flags outside showcase all of the countries that were in attendance). While you are in the neighborhood, take a few minutes to step inside the lobby of this gorgeous hotel, or book a room and stay the night.

Either way, it's an experience you will not forget.

>> More about what you will see a the Fairmont Hotel

Another one of the top attractions in Nob Hill San Francisco is Grace Cathedral. It is the largest—and in my opinion, the most beautiful—church in the city.

The cathedral is open daily to the public. Stop by for a closer look at its famous golden doors, colorful stained-glass windows, and other gorgeous icons.

5. See a Concert at the Nob Hill Masonic Center

The Nob Hill Masonic Center features events several times a month. You will find internationally recognized comedians and bands. Previous performers here include Ricky Gervais, Spoon, and Tom Jones. You will find it at 1111 California Street.

Check out the calendar below for a list of upcoming shows.

6. Enjoy the View at the Top of the Mark

One of my favorite places to grab a drink in Nob Hill San Francisco is at the Top of the Mark. It is one of the few bars with amazing views of the city of San Francisco.

The bar is on the top floor of the Mark Hopkins hotel on the corner of California and Mason Streets. Stop by for a drink or two and enjoy the scenery from high above the city.

This is also the perfect opportunity to dress up a little during your visit.

7. Learn Its History on a Nob Hill Walking Tour

You will find two tour options for Nob Hill San Francisco. The first is a free walking tour offered through SF City Guides. The second is a paid tour offered twice a day.

Both are excellent tours and offer you a great look inside this history and interesting district.

Both are two-hour tours long and take you back to the 1800s, when the first mansions were built here. You will also learn about the other important buildings and landmarks in the area.

The free walk is offered most Thursday, and Sunday afternoons at 1 pm or 2 pm. There's no need to register. Simply show up at the front entrance of the Stanford Court Hotel on California Street between Mason and Powell a few minutes before the start and check in with the guide.

The paid walk offers a little more depth of the history of the district. It runs daily at 10am and 1:30pm.

>> Check for ticket availability for the paid, daily guided tour on Viator

>> Other free walking tours around SF

>> Find a list of other unusual things to do in SF

9. See it Rain at the Tonga Room

Another one of the fun things to do in Nob Hill San Francisco is to grab a drink at the Tonga Room. This historic bar is located inside the Fairmont. It features island themed cocktails and dishes.

The best part is the large lake in the middle with a boat. If you arrive at just the right time, you can also see it rain!

You won't find much shopping in this district except for a few shops along Polk Street between California and Broadway.

Top picks include ReLove (a second hand store), Terrasol (with handmade items such as soap, candles and other small home decor items), and Picnic (with home decor, clothing and other fun items).

After living in Nob Hill San Francisco for several years, I've grown to love so many of the restaurants here. Below are just a few of my favorites.

Stop by for a Beer or Glass of Wine: Top Bars

>> Find some great breweries in SF

At the top of Nob Hill, you will find a group of highly rated luxury hotels. In addition, this neighborhood also offers several two- and three-star hotels. 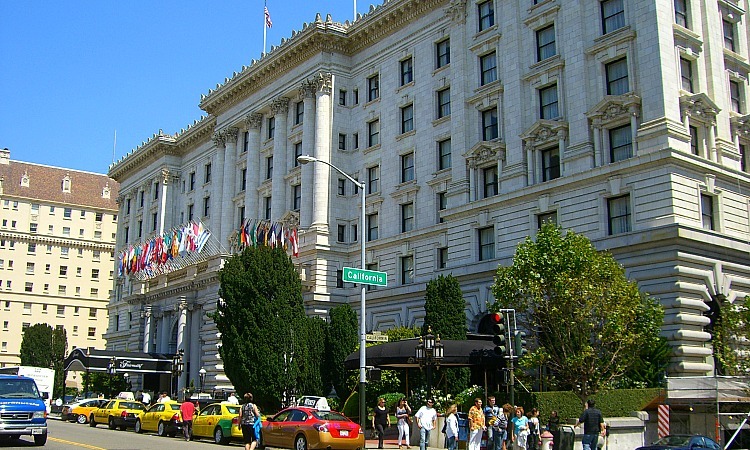 Here are some of the best options here.

As I mentioned before, the Fairmont is a historic hotel in Nob Hill San Francisco. This four-star hotel is gorgeous and also in a great location.

In addition to its history, it has a good sized gym, the Tonga Room (a Tiki bar where it 'rains' once an hour), and a spot right on the California Cable Car line. Here are some of its other amenities:

Rooms here range from about $280 to $725 a night. Compare nightly rates for the Fairmont Hotel on TripAdvisor.com.

The Stanford Court is the first of the top four-star hotels in Nob Hill San Francisco. It's in a great location right on the California Cable Car line and just blocks from both Union Square and Chinatown.

The 393-room hotel has the following amenities:

The Aurea Cafe and Lounge is located on site. It's a great place to enjoy some small plates and local and international wines.

A standard room here ranges from about $190 to $390 a night. Discover additional ratings and reviews on the Renaissance Stanford Court Hotel on TripAdvisor.com.

In addition to the luxury hotels, you can also find a number of mid-range hotels in or near this great neighborhood.

You will find plenty of public transportation options to get to and around Nob Hill San Francisco. You will also find a few ideas for parking. 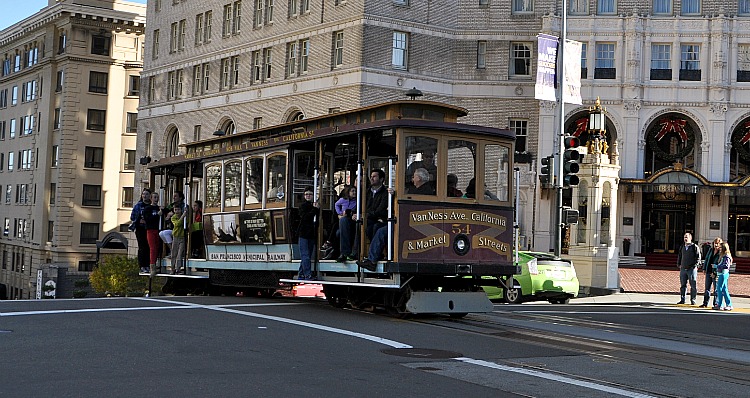 Cable Car: You can also take the cable car from Union Square. You'll want to look for the Hyde/Powell or the California cable car lines. Either ride takes only about 10 minutes and is a fun way to climb to the top of the hill.

Bus: The 1 California bus will also run you up the hill. It drops off only a block or so from most of the major sites listed above. It picks up passengers on Sacramento Street, just a few blocks from Union Square. This option takes about 15 to 20 minutes depending on the time of day.

Taxi/Lyft: Taking a taxi is also an option. This is the fastest method and should only take about 5 or 10 minutes. Expect to pay around $15 to $20 for the ride from Union Square to Nob Hill. The price should be less for Lyft.

Where to Park in Nob Hill San Francisco

Parking on the street in Nob Hill San Francisco can be difficult. The good news is that you will find several parking garages so you don't have to waste time finding a spot. Rates for these lots range from $3 for 20 minutes up to $45 for the day.

Hyde Park: Close to the cable car museum and activities on the northern end of the district, 1320 Washington St.

Crocker Garage: Best parking for the Nob Hill Masonic Center, Grace Cathedral and the high-end hotels at the top of the hill, 1045 California St. 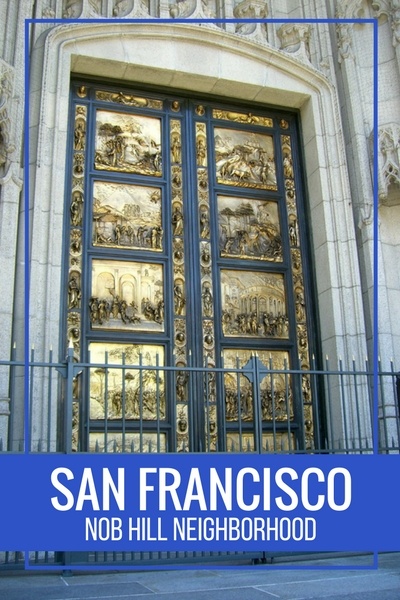