The San Francisco Marina District is a beautiful neighborhood along the bay. Here you will find popular attractions such as access to the Golden Gate Bridge, Crissy Field, and the Palace of Fine Arts.

It also offers some great shopping and a wide variety of restaurants.

The history of this neighborhood is fascinating. For years, it was just marsh or swamp land, until it was selected as the site for the 1915 Panama Pacific International Exposition.

Shortly after its selection, they built several temporary buildings in the neighborhood to create a large exposition for the world fair. 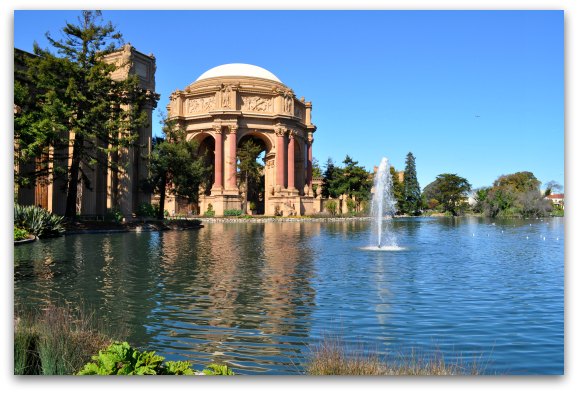 The picture above is of the Palace of Fine Arts, the only building still standing from the exposition. It too was slated to be torn down, but the city decided to keep it because it was so beautiful. The expo team did some work on it to extend its life which is why it still stands today.

Because most of the San Francisco Marina District is on landfill, it received quite a bit of damage during the 1989 earthquake. If you've seen the pictures of collapsed buildings from this earthquake, they were probably of buildings in this neighborhood.

After the earthquake, the neighborhood was rebuilt and today is as strong as ever. This is one of my favorite neighborhoods because of its beauty and proximity to the water.

Just to the south of this district, you will find the Cow Hollow Neighborhood. It's small and also offers a variety of fun things to do and places to eat. I've added them together as it's easy to visit both of them in just one day.

Top Things to Do 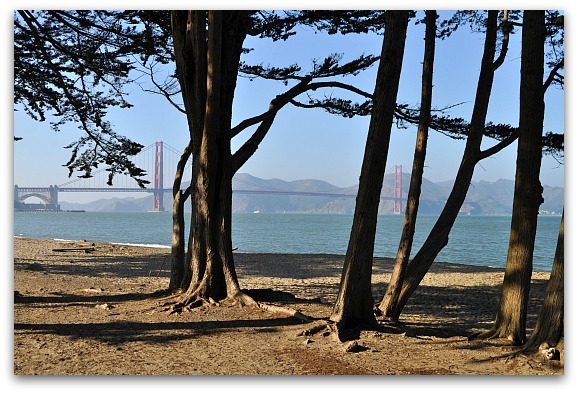 Along the northern side of the San Francisco Marina District is Crissy Field. Here you will find one of the largest beaches in San Francisco. You will also find a running/walking trail and a large grassy area that is perfect for a game of football or to throw around a frisbee with friends.

This is also where you can find some of the best views of the Golden Gate Bridge and Sausalito. 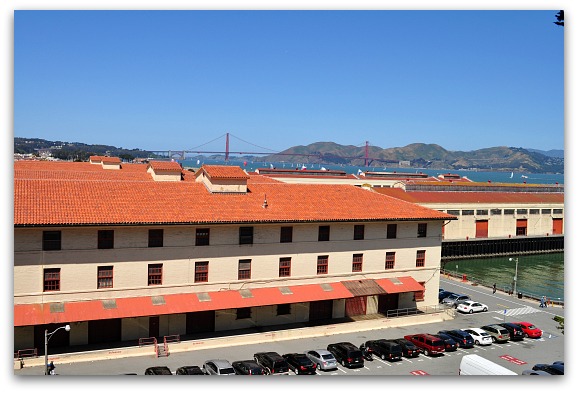 Fort Mason is an old army base that was remodeled in 1977 to host large events. The center is the perfect venue for some of the biggest events in the city, like the annual San Francisco Chronicle Wine Competition.

They also hold local events, such as Ocean Film Festival and the Annual Public Library Book Sale. There is something fun and interesting almost every weekend at the Fort Mason Center.

In addition, you will find some interesting museums and galleries here.

>> Things to Do at the Fort Mason Center 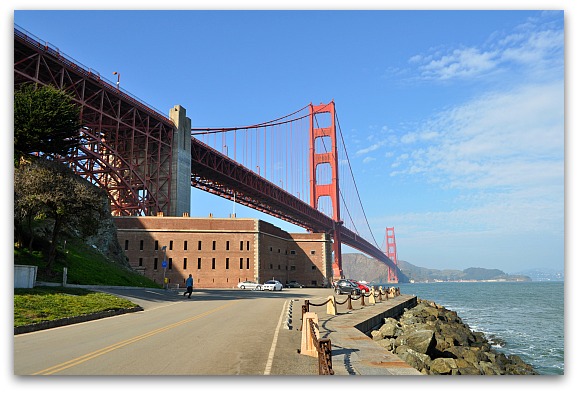 Fort Point is another old army base along the shores of the San Francisco Bay. It's also one of the oldest buildings in San Francisco, and it has an interesting history due to its location right under the Golden Gate Bridge.

This free site is a must see for history buffs, especially those who love military history. 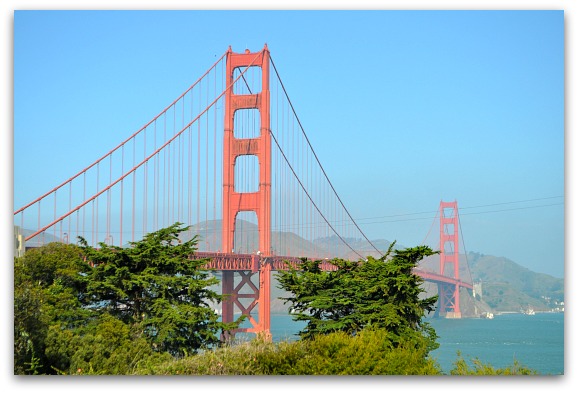 The Golden Gate Bridge is one of the most visited San Francisco attractions. You can walk, bike, or drive over this beloved international icon. You will find lookout points on both the northern and southern ends of the bridge for that picture-perfect view.

Another way to see the Golden Gate Bridge is by taking a city tour. The San Francisco Grand City Tour gives you a chance to ride over the bridge. You will also get a photo opportunity of the bridge at Vista Point.

In addition, you will ride through Golden Gate Park and get amazing views of the city from Twin Peaks.

The Octagon House is another quick stop just to the south of the San Francisco Marina District in the Cow Hollow neighborhood. This old eight-sided house was built in 1861.

It fell into disrepair over the years, but a local non-profit bought and restored it. You can now visit the house and its extensive collection of colonial and federal decorative arts three times a month.

>> Tips to Visit the Octagon House 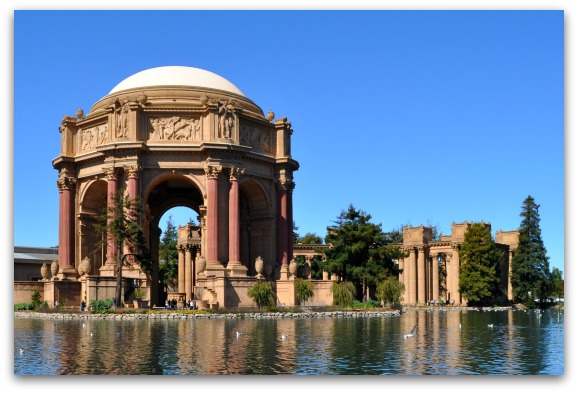 One of my favorite attractions in the San Francisco Marina District is the Palace of Fine Arts. This free attraction is the only building still standing from the Panama Pacific Exposition in 1915.

Stop by to see the detail on the outside of this building and learn more about its history or catch a show inside at its historic theater. 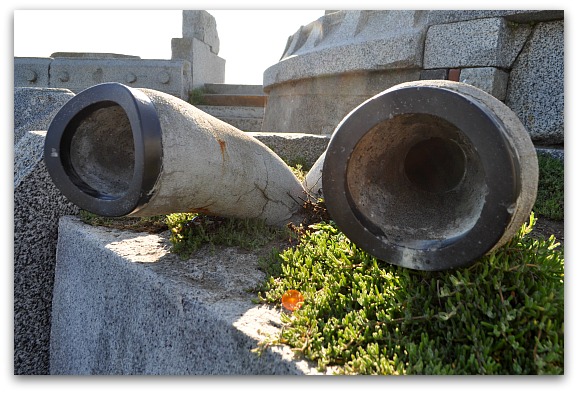 Another fun, free and quick stop in the San Francisco Marina District is the Wave Organ. This cool piece of art sits on the waterfront and makes music based on the waves.

You can walk inside the Wave Organ to see how it makes music up close. It's a fun stop for kids of all ages!

To find it, walk past the St. Francis Yacht Club and the Marina District Lighthouse to the end of the walkway.

If you plan on spending some of your time shopping, then I recommend heading over to Union Street in the Cow Hollow District or Chestnut Street in the Marina.

Dozens of small, unique shops line up on both sides of both of these streets. In addition to local shops, you will find your favorite brand names here, such as Sephora, Z Gallerie, and Nine West.

The Union Street Festival is one of the largest street festivals in San Francisco. This event usually held the first weekend in June each year. Over two days, you will find hundreds of arts and crafts booths.

In addition, there are over a dozen different food vendors and a couple of stages with live music. This family-friendly event also offers lots of kids activities.

It's a fun way to spend a few hours while visiting the San Francisco Marina District and Cow Hollow Neighborhood.

They range from a tour of the Palace of Fine Arts to a historic tour of the Art Deco buildings in the neighborhood.

The majority of the restaurants in the San Francisco Marina District and in Cow Hollow are on or near Union and Chestnut Streets. You will find everything from grab-and-go options to higher end, sit-down restaurants.

Here are just some of my favorites.

You will also find a high concentration of bars along Union Street between Franklin and Steiner, and on Chestnut Street between Fillmore and Divisadero. Most of the bars in the San Francisco Marina District and Cow Hollow neighborhood draw a young crowd that likes to live it up on the weekends.

The most famous area for nightlife is called The Triangle. Here you will find three popular bars on the corner of Fillmore at Greenwich.

>> Find a list of my favorite bars all around SF

Many of the hotels in this neighborhood are two-star hotels or motels. Although most people opt to stay in either Fisherman's Wharf or Union Square, here the advantage is that many of the hotels include parking. Although the hotels here don't have a lot of amenities, they are worth a look if you are on a tight budget and/or have a car.

The Hotel Del Sol is one of the best hotel/motels in this neighborhood. It is bright and cheery inside and out with its vibrant, almost beachy decor.

You will find some very basic amenities at this family-oriented hotel including a heated outdoor pool, a simple breakfast, and free Wifi. It's a great value because the parking is included.

Find the best deal on this hotel on Booking.com: Hotel Del Sol

Travelodge at the Presidio San Francisco

Another great value in this neighborhood is the Travelodge at the Presidio. This two-star hotel/motel is on the western side of the San Francisco Marina District, just a few blocks from the Presidio park.

Their amenities include a simple breakfast and a business center with printing and internet access. They allow pets with a small deposit and parking is free.

Find the best deals on this hotel on Booking.com: Travelodge

From Fisherman's Wharf: Fisherman's Wharf is about a mile away from the eastern side of the San Francisco Marina District and Cow Hollow. There are quite a few options for getting between these two neighborhoods.

From Union Square: It takes a little longer to get from the Union Square neighborhood over to the San Francisco Marina District and Cow Hollow. However, you will find several options.

Hop On/Hop Off: You will also find a pick-up/drop-off point in the San Francisco Marina on the Hop On/Hop Off Bus Tour. You can purchase a tour pass for either one or two days (sometimes you can get the two-day pass for the price of the one-day!). The tour offers 20 stops around San Francisco and it's a great way to get to know the city on one of your first days here. The Palace of Fine Arts stop is the best one to use to explore the Marina and Cow Hollow neighborhoods. Learn more about how to book the Hop On/Hop Off Tour.