The top San Francisco districts are home to some of our best attractions, museums, and other things to do. My favorites include Chinatown, the Civic Center, and Union Square.

Other hotspots to see include the Haight-Ashbury, Fisherman's Wharf, and North Beach.

Read on for details on the 10 most popular SF neighborhoods and what you can expect when you visit each one. 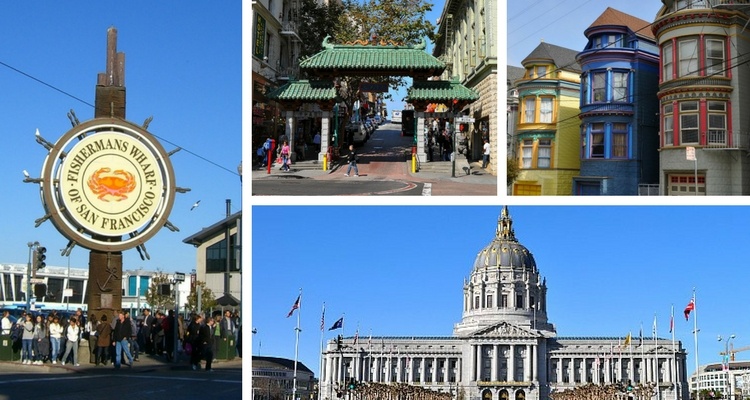 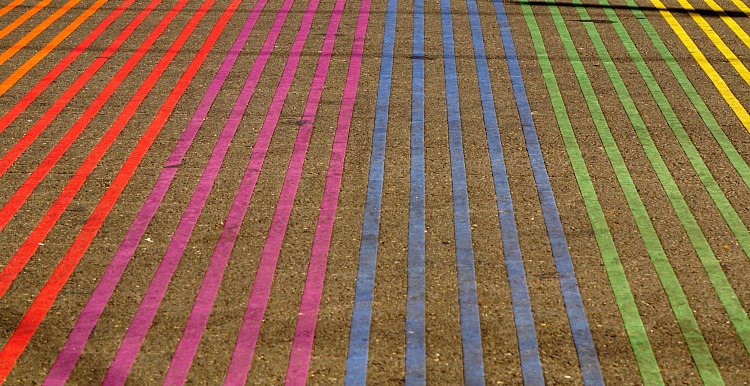 Even the streets are colorful in SF's Castro district. This colorful crosswalk was added just a few years ago and added even more fun to this already lively neighborhood. You will find all four crosswalks at the corner of Castro and 18th Streets with these cool rainbow colors.

San Francisco's famously gay neighborhood is home to the GLBT Museum, Harvey Milk's old camera shop, and a ton of great bars and restaurants. This is a fun area to have brunch, go out dancing at night, or learn more about the history of the queer community.

It's one of the most colorful San Francisco districts.

The Castro District begins where Market Street meets Castro and 17th Streets. Heading south of this intersection, you'll find lots of cafes and hangouts. This district lies west of the Mission District and north of Noe Valley.

>> Learn more about visiting the Castro

>> Discover more about this district on this popular historic walking tour, click to learn more and find ticket availability 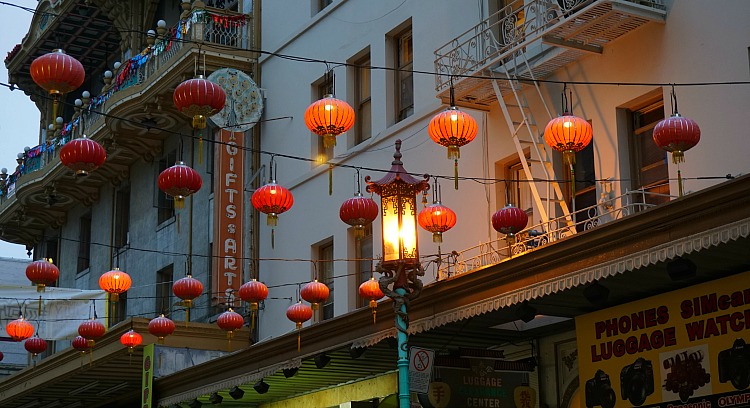 Every night along Grant Avenue in Chinatown, the lights turn on as the sun sets. Don't miss your chance for a closer look at the gorgeous details on the green and red light posts.

SF Chinatown is one of the largest and is the oldest Chinese settlement in the US, offering a unique taste of traditional food, goods, and cultural activities.

This is one of the San Francisco districts where you can try some dim sum, watch how fortune cookies are made, shop for cheap souvenirs, and visit the Buddhist temples.

Chinatown is centrally located among the best San Francisco district to visit, just south of North Beach and west of the Financial District, and can easily be reached by cable car or bus. It's also less than a mile's walk north from Union Square.

The golden dome of San Francisco City Hall is the tallest in the US. It beats out the dome of the US Capitol by just 19 feet.

Civic Center is where a lot of civic and cultural action takes place. It is home to the elegant gold-domed City Hall and the acclaimed Asian Art Museum, the Orpheum Theater, Davies Symphony Hall, and the War Memorial Opera House.

Enjoy a performance at one of these beautiful, historic venues.

Civic Center sits on the north side of Market Street, about a mile down from Union Square. It is flanked by Hayes Valley to the west and the SoMa District to the east.

This neighborhood has its own BART and light rail station. 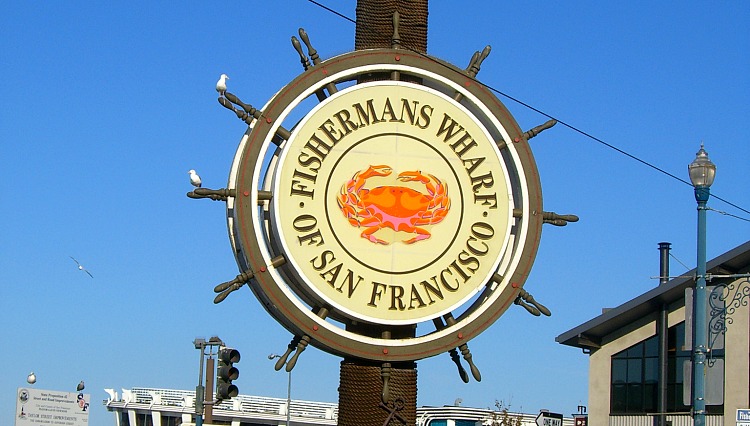 The Fisherman's Wharf sign is one of the most recognizable in all of SF. It sits on the corner of Jefferson and Taylor Streets.

For many tourists, Fisherman's Wharf is at the top of the list of best San Francisco districts because of its high concentration of attractions and entertainment.

It is from these piers that you'll catch a ferry to Alcatraz or Angel Island, try the classic clam chowder-in-a-sourdough-bread bowl, shop for chocolates at Ghirardelli Square and see the aquarium and sea lions at Pier 39. You can also play vintage arcade games and visit the Wax Museum.

Fisherman's Wharf is located along the northern waterfront in the northeast part of San Francisco, between the Marina District to its west and North Beach to its east.

A scenic cable car ride or bus will take you to this area.

>> Details on visiting this district

>> Find tickets to the most popular Bay Cruise on GetYourGuide

>> Great places to eat all around Fisherman's Wharf 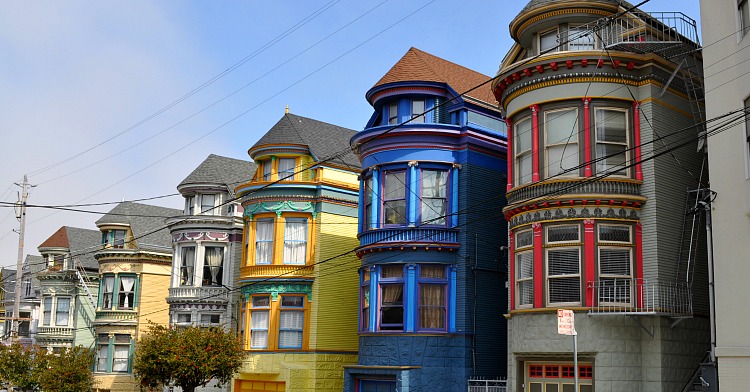 In 1906, the Haight-Ashbury District was more of a suburb in San Francisco. Due to its location, it was away from the devastating fires that took hold of the city after the earthquake. This district has more historic Victorians than any other neighborhood in SF.

Many people come to the Haight-Ashbury looking for a taste of the Summer of Love, as this was where The Grateful Dead and Janis Joplin called home during the 1960s hippie era.

Today you'll find some of that vibe, with brightly painted Victorian homes as well as funky shops and good cafes and restaurants.

The Haight-Ashbury neighborhood lies just under the panhandle at the southeast corner of Golden Gate Park. It's bordered by Cole Valley to the south and the Lower Haight to the east. You can take a Muni bus or the light rail N train to get here.

>> More about the Haight-Ashbury district

The cherry blossoms are a sight to see in the Japanese Tea Garden each year. They bloom from mid-March to mid-April. They add to the beauty of this already lovely garden.

Though technically not a district of San Francisco, Golden Gate Park is an extensive recreational area that is popular among locals and visitors alike.

It offers more than 1,000 acres of parks and trails. Also, it contains some of SF's most popular museums and attractions, including the California Academy of Sciences, the de Young Fine Arts Museum, and the Japanese Tea Garden.

Bordering the park to the north and south are the residential neighborhoods The Richmond and The Sunset, also known as "The Avenues," numbered 2 through 48.

>> Things to see and do in Golden Gate Park

>> Check for tickets to the California Academy of Sciences

The Palace of Fine Arts was originally built for the 1915 Panama Pacific Exposition in San Francisco. The event was important in SF's history as it showed how well the city recovered after the 1906 earthquake and fire.

One of the Marina's crown jewels is the Palace of Fine Arts, with its peaceful lake sitting in front of a beautiful dome with Roman-style columns.

However, this district has also become hot with its trendy stores on Union and Chestnut streets, its great selection of bars and restaurants, the festivals hosted at the Fort Mason events center, and Golden Gate Bridge views.

The Marina District is located along the waterfront on the north side of San Francisco, just east of the Presidio and the Golden Gate Bridge and just west of Fisherman's Wharf. On the neighborhood's southern edge, you'll find Pacific Heights.

You can walk here from the Piers or take a bus.

>> More about visiting the Marina

The Marina was also the district that got hit hard during the 1989 Earthquake. You can read about this history of this big quake here. 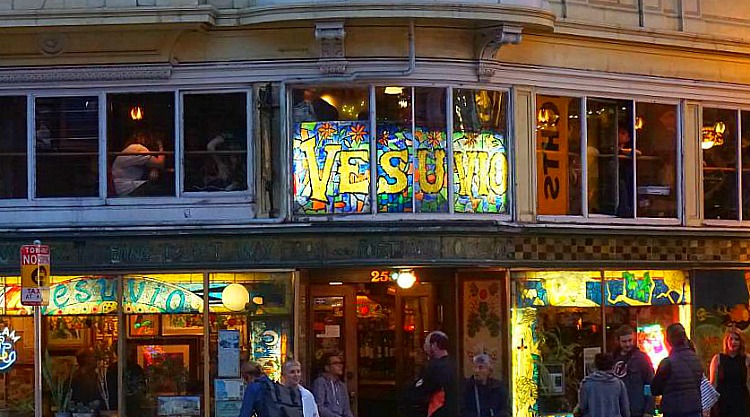 The Vesuvio Cafe was a popular hangout spot for the Beat Generation when they called this district home in the 1950s and 1960s. Today, it's a fun place to grab an interesting cocktail.

North Beach is one of the best San Francisco districts for its fascinating history. It originated as SF's Little Italy, where many Italian immigrants were fishermen or restaurant and café owners. It's also home to Joe DiMaggio and the Beat Generation of the 1950s.

Today you can enjoy Washington Square Park or the still-thriving Italian cuisine.

North Beach is located in the northeast corner of San Francisco, between Columbus Avenue and the bay. It encompasses the Telegraph Hill area, where you can visit Coit Tower, and is bordered by Fisherman's Wharf and Russian Hill to the west and Chinatown to the south.

The 30 and 45 buses run through this neighborhood, but you could also take the Powell/Mason cable car for the whole SF experience.

>> What to see and do in North Beach 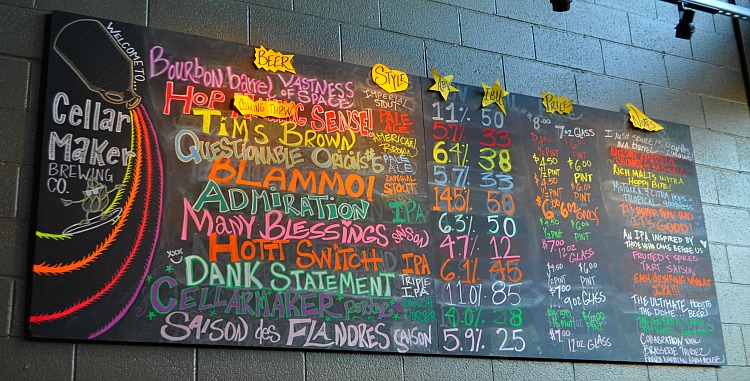 SOMA is now turning into a home (and a perfect place) for many breweries as a former warehouse district. Cellar Maker Brewing Company is one of my favorites in this neighborhood.

SoMa, the neighborhood south of Market Street, was once mainly full of warehouses and nightclubs, but is now home to several tech companies, new condominiums, restaurants, bars, and the SF Giants home, Oracle Park.

This is also where you'll find the SF Museum of Modern Art, the Contemporary Jewish Museum, the Museum of the African Diaspora, and the Children's Creativity Museum.

It's one of the largest San Francisco districts with several sub-districts, including South Beach and Mission Bay.

The SoMa District is pretty large, encompassing the triangle south of diagonal Market Street, bordered by the bay to the east, and the Mission District, Potrero Hill, and the Dogpatch to the south.

The northern edge of this neighborhood sits along the BART/Muni route, while the eastern side near Oracle Park can be accessed by Caltrain.

Hotel Deals: Are you looking for the perfect place to stay during your visit to top San Francisco districts? I recommend starting your search on Booking.com. They have a massive selection of hotels with great deals. You can also read recent guest reviews, so you know exactly what it's like to stay there. Visit Booking.com today! 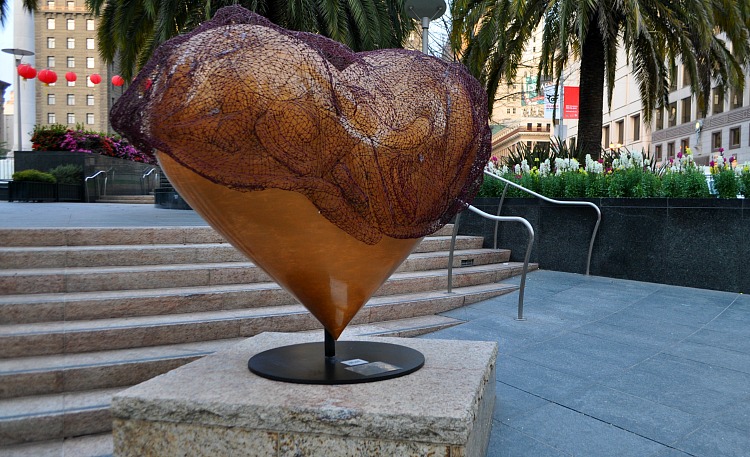 These hearts in Union Square change frequently. They are part of a fundraising campaign for a local hospital. Once a heart is purchased, it's required to spend a few weeks in Union Square before heading to its long-term home somewhere in SF.

Union Square is often considered the heart of the city, as it's nestled among the tall buildings and stores of downtown. It is one of the most popular San Francisco districts because of its shopping, lodging, dining, and access to the theater.

This is also where you'll see the cable car turnaround and can hop on to head towards Chinatown and Fisherman's Wharf.

The actual Union Square is a large plaza located two blocks north of the Powell Street BART/Muni station, where you'll find live entertainment during the summer and ice skating during the winter.

If you walk about a mile north, you'll hit Chinatown; a mile northeast, the Ferry Building; and just a few blocks south, SoMa attractions like the SFMOMA and Yerba Buena Gardens.