The San Francisco 1906 Earthquake was one of the largest and most significant in Northern California. This is typically referred to as the Great San Francisco Earthquake.

Although it's well known, there are a certain facts about it that are misunderstood. Here you will find the truth about this historical event.

The Moment the Earthquake Occurred 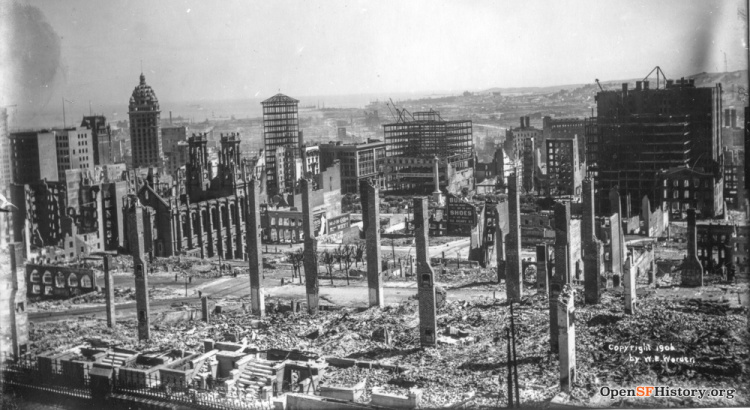 The city of San Francisco was all quiet around 5am on April 18, 1906. No one had any idea what was about to happen to this city by the bay.

At 5:12am (pacific time), the earth began to shake, and the San Francisco 1906 Earthquake began to rattle the city. According to the US Geological Survey, it was measured at a magnitude of 7.8.

A section of rock along the infamous San Andreas Fault snapped just a few miles north of the city, which caused the largest earthquake on record for the city. At the time, there were only about 400,000 people living here.

The shaking spread both north and south along the fault line, impacting a number of residents around the bay area. People living as far north as Oregon and as far south as Los Angeles reported that they felt the tremors from this earthquake.

The Aftermath of the 1906 Earthquake 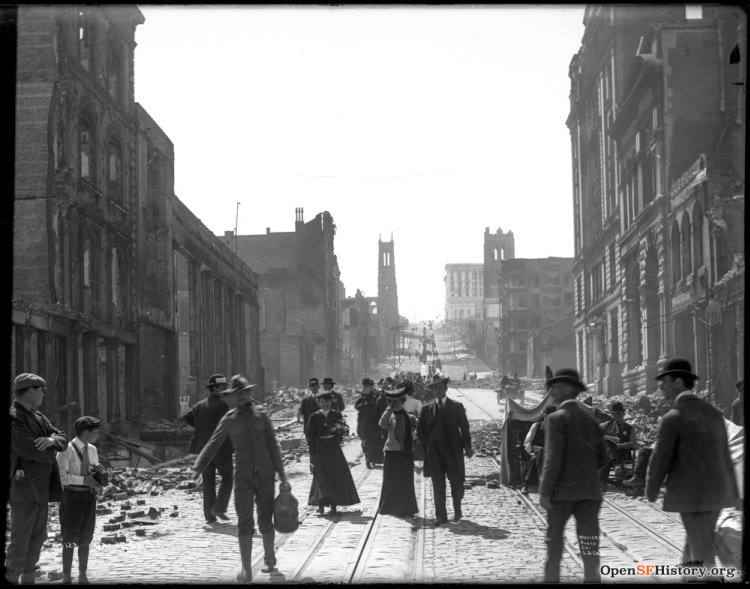 The San Francisco 1906 earthquake caused a heart-breaking amount of damage to the city and surrounding bay area. It's not only the damage, but the number of people that lost their lives during the quake.

The number of people in SF that lost their lives is reported to be around 315 people. However, the overall death toll from the quake is closer to around 700 people.

There were also several smaller aftershocks along the fault line for months after the quake. 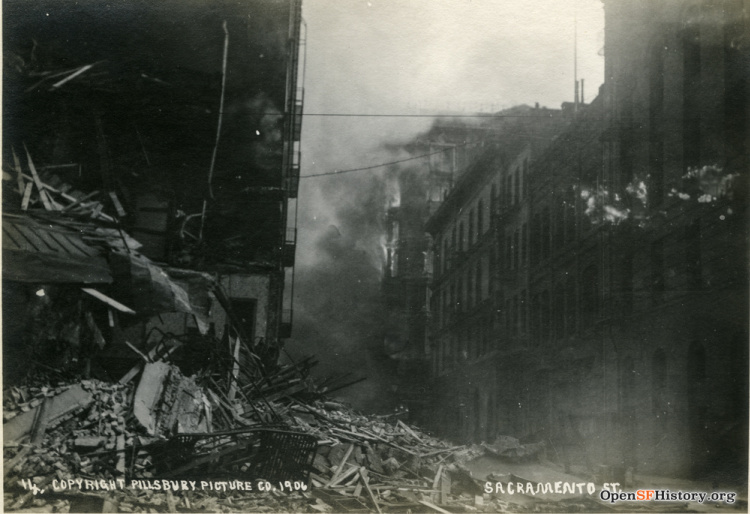 Fire along Sacramento Street after the 1906 Earthquake.

The shaking from the San Francisco 1906 earthquake caused quite a bit of structural damage. It also broke a number of San Francisco's gas and water lines.

Shortly after the earthquake hit, the fires began. The fires built steam quickly since there were several broken gas lines.

The fire department was also unsuccessful in putting the fires out since many water lines were broken and they didn't have the proper tools to fight the fires. The fire burned for three days after the earthquake. 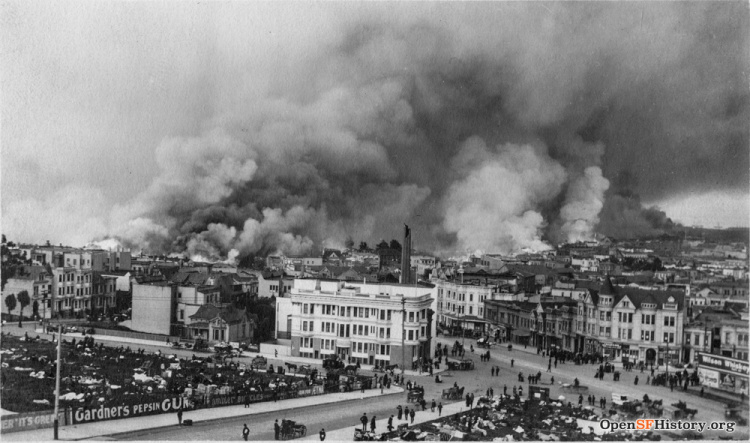 They were finally able to put the fires out by building a fire path. This caused the fires to burn to the path and then slowly burn out. The path was created along what is now known as Van Ness Street.

You will notice quite a difference in the buildings on the east and west sides of Van Ness. The east side is completely rebuilt with buildings from the late 1910s and early 1920s. However, many beautiful Victorians from the 1800s are still erect on the west side of Van Ness Street.

The San Francisco 1906 Earthquake and Fire left around 300,000 people homeless and the bay area in despair. A number of camps were set up around the city to deal with the destruction. Many people also left the city by the bay in search for more stable grounds.

You can read some first-hand accounts and more historical facts in these 1906 San Francisco Earthquake books. It's interesting to hear more about that day from some of the people that survived and were willing to tell their story several years later.

The best way to learn more about this important event in San Francisco history is on a walking tour with SF City Guides, a part of the SF Public Library. They offer several great walks that talk about this event, however, two focus most of their time talking about it and its impact on our wonderful city.

1906 Earthquake and Fire: This tour starts near Market and 1st Streets. On it, you will learn all about those that fought the tough fires, see buildings that survived, and hear more about how SF rebuilt itself after this devastating event. This tour runs several times a month. Visit the SF City Guides page for upcoming dates and times.

Palace of Fine Arts: Head to the Marina District to learn all about the 1915 Panama Pacific Exposition. This was the event that helped revitalize San Francisco and put it back on the map after the 1906 Earthquake and Fire. See one of the structures built for this event and what SF had to do in order to be selected as the city for it after the 1906 earthquake and fire. This tour runs two to three times a month. Visit the SF City Guides page for dates and times.

The Return to Greatness 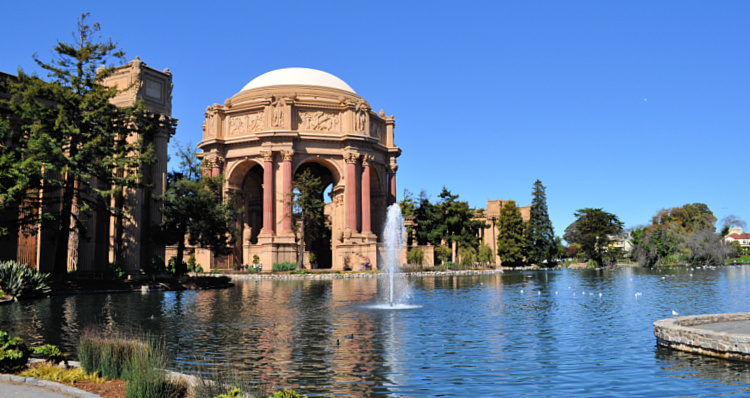 Shortly after the Great SF quake, the city won the bid to host the Panama Pacific Exposition. The event was a place the entire world could celebrate the completion of the Panama Canal.

After winning the bid, the city worked day and night to get everything ready for the event. Discover even more about the event and what San Francisco had to do in order to prepare. You can also see some photos of one of the buildings that is still standing in San Francisco's Marina District. 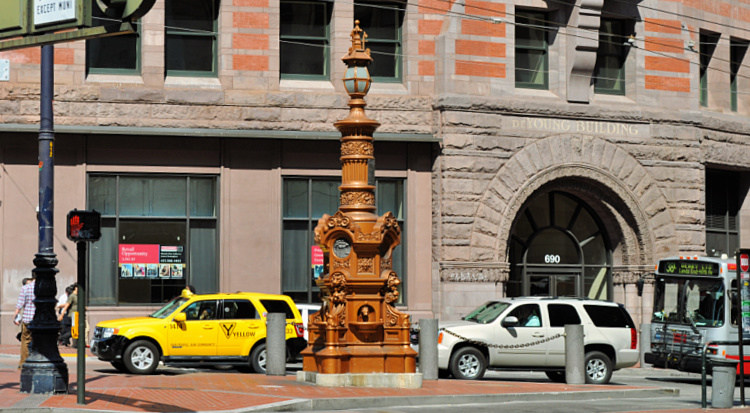 This fountain is where the city holds an annual memorial for the 1906 Earthquake and Fire.

Every year, there is a memorial celebration at the exact time the earthquake hit. The fountain shown in the image above is where the event occurs.

The fountain, on Market and Kearny Streets, turned into an unofficial meeting place for residents after the tragic event. They came searching for family, friends and other loved ones.

Hundreds of visitors walk by this fountain every year - not understanding its significance. It's one of the few structures, in this area of the city, that remained standing after the earthquake.