McElroy Octagon House in San Francisco: A Museum of the Decorative Arts of the Colonial & Federal Periods

Built in 1861, the McElroy Octagon House in San Francisco is now a small museum. This blue beauty sits in the Cow Hollow District on the northern side of the city. It is one of just three octagon houses still standing in SF and the only one open for the public to tour.

William C. McElroy and family built the house across the street from its current location. At the time, octagon houses became popular because their design allowed for great airflow and light throughout the house. 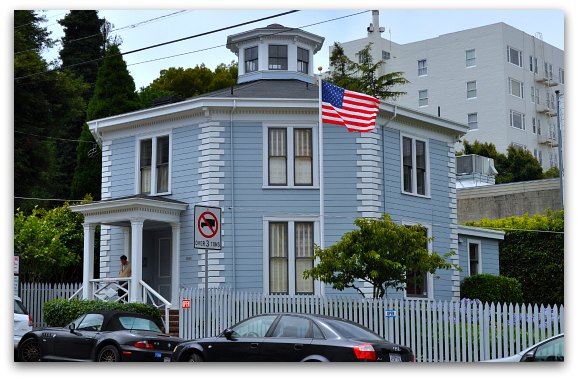 The house did sustain some damage from the 1906 earthquake but was quickly rebuilt to its former glory.

In 1951, our local power company bought the land where this house stood. They offered the house for sale for $1 to anyone willing to move it.

The National Society of The Colonial Dames of America in California jumped at the chance to own it. Two of their members owned the land right across the street and donated it as a location for this new house.

No one lived in the house for a number of years and the house needed quite a bit of work. After The Colonial Dames purchased the house, they raised funds and spent a few years renewing it to its former glory.

In 1968, the City of San Francisco officially designated it as a Historical Landmark. The National Register of Historic Places added it to their list in 1972.

What You Will See During Your Visit

The draw for visitors to the Octagon House in San Francisco is not just the house, but also the decorative pieces displayed inside.

Pieces from both periods include silver, portraits and both English and Chinese ceramics. You will also see furniture including tables, chairs and couches.

One of my favorite pieces on the first floor is the water bucket. All of the houses at the time had one since everyone in the neighborhood helped put out any fires. They also used it to keep their wooden house safe.Another beautiful piece on this floor is a painting of George Washington by John Trumbull. Trumbull is a famous artist during the Revolutionary War and known for his historical paintings.

You will also find a number of amazing pieces on the second floor of the Octagon House in San Francisco. The most notable on this floor is a case containing documents with signatures from 54 of the 56 men that signed the Declaration of Independence. It's an impressive collection gifted to the group after the death of a local collector.

Another small, but fun piece is a lithograph of the family that built the house. It can be hard to find, so make sure you ask the second-floor docent where it's located. You don't want to miss it!

Since the Octagon House in San Francisco is run by volunteers, it is only open to the public three times a month. You can visit the second Sunday or the second and fourth Thursday of the month.

It is not open at all in January. They close on all major holidays.

Although it is free to visit, donations help them keep up with maintenance. There is a donation bucket at the front table. Feel free to throw a few dollars in either before or after you visit.

Due to the age of the pieces inside, they do not allow photography or videos at all.

You will find this gem in the Cow Hollow District. It's at 2645 Gough Street near Union Street.

From Union Square: You can easily get to this house by taking the 45-Union Street bus from Union Square. Pick it up on the corner of Sutter and Stockton (just a block from the plaza). Take it all the way to Gough and Union. You will see it right across the street. This will take about 20 minutes and is $3 per person each way.

Where to Find the Other Octagon Houses in San Francisco

You will find three octagon houses still standing in San Francisco. The main one outlined above is the only one that you can tour. Where are the other two?

Feusier Octagon House: Just about a mile away from the McElroy Octagon House in San Francisco is the second historic gem. This one is privately owned and is not open for public tours. However, you can walk by and take pictures of this beauty. It's located at 1067 Green Street in Russian Hill.

Land's End Octagon House: Most of the octagon houses in San Francisco were built in and around the Russian Hill District. However, there is one that is in Land's End. This historic house was once used as a look out point over the Pacific Ocean. It was abandoned years ago and is now hidden behind several old trees.

It's currently owned by the Golden Gate National Recreation Area and they are working on plans to determine if it can be reopened or used in the future. It's located near the Land's End Trail parking lot. 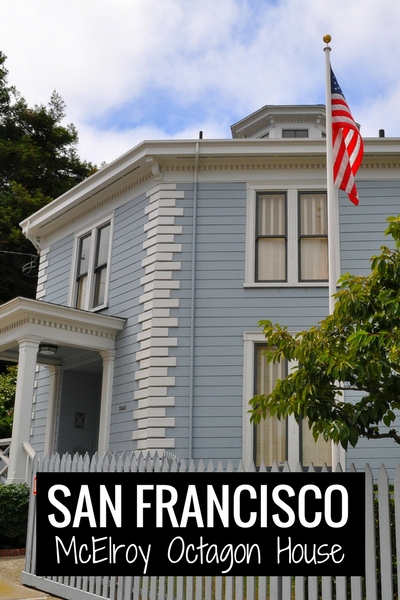