Magic Bus in San Francisco: What it's Like to Journey the Streets of SF in this 1960's Themed Bus

If you always wanted to visit San Francisco in 1967, then take a 'trip' on the Magic Bus in San Francisco. This mind-altering tour uses videos, a theatrical guide and both live and recorded audio to transport you back in time.

Riding in the colorful Magic Bus is unlike any other city tour of San Francisco. It's a unique experience created by the Antenna Theater, known locally for their wacky, yet engaging performances. 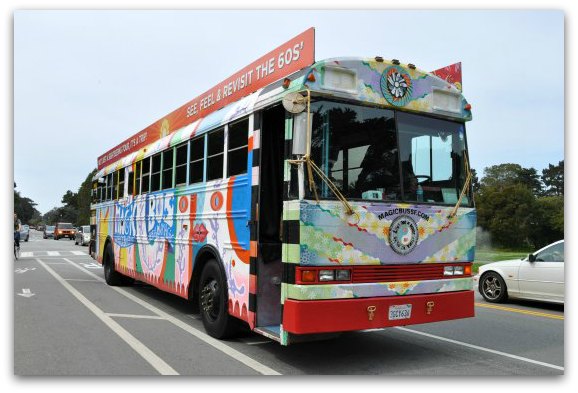 The 1960's were a powerful decade. During this time, thousands of free spirits flocked to San Francisco to experiment with sex, drugs and rock & roll. It was also home to the 1967 Summer of Love.

The history of this period in San Francisco is the basis for this colorful tour.

Your tour starts at Union Square. Your high-energy tour guide will probably arrive shortly before the bus. This person will check you in, so you can jump on the bus once it arrives.

The fun begins the minute the bus pulls out of Union Square. You will hear 60s music blasting in the background as your tour guide encourages you to sing along. 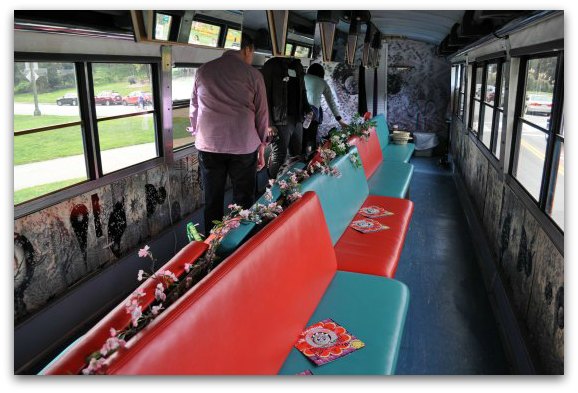 The colorful interior of the bus

The first neighborhood you enter is Chinatown. Your tour will head down Grant Avenue, the heart of the neighborhood.

Along the way, the video screens will lower and raise as short video snips play. Each one offers a small piece of information on a major event that happened in the 60s. Your tour guide will also chime in and point out interesting things for you to look at in Chinatown. 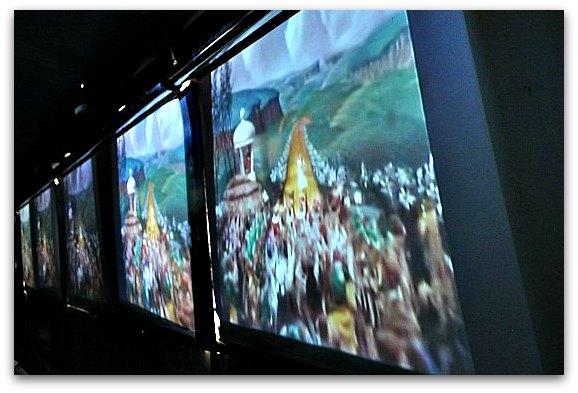 At the end of Grant Avenue, you will turn right into the North Beach neighborhood. This part of the city is famous for the Beat Generation that lived here during the 1950s and 60s (click here for details on the Beat Museum in North Beach).

You will roll past several locations where the Beat generation spent their time including the Vesuvio Cafe and the City Lights Bookstore. You will also start to learn about the famous musicians that played here around the same time.

The Magic Bus then cruises through the Financial District. During this part of your journey, you will learn more about some important events of the 60s as well as places of interest in this district.

The Magic Bus in San Francisco winds along Market Street on your way to the Haight Ashbury district. As you ride through this part of the city, the screens cover the windows for most of the ride.

At this point, the focus turns to the famous musicians that got their start in San Francisco.

The Magic Bus then cruises into the Haight. The screens raise up once again, you can imagine yourself here in the Summer of Love and get a feel for what this free-spirited neighborhood must have been like. 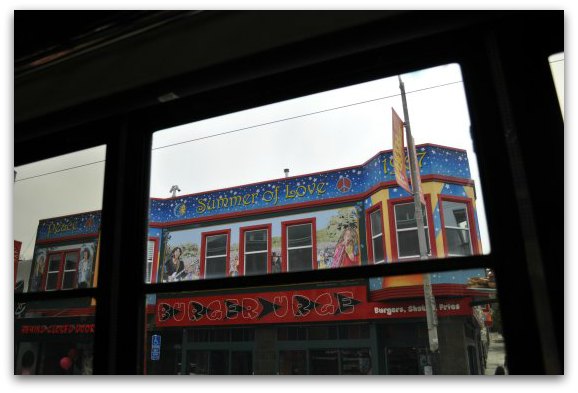 The bus continues down Haight Street as your guide points out additional places of interest. The bus then leaves the Haight and enters into Golden Gate Park.

Once you reach the park, you will stop in front of the Conservatory of Flowers for a quick 10-minute break.

The Magic Bus in San Francisco then reverses direction back through the Haight and down through Hayes Valley. Your journey ends with a quick drive through the Tenderloin and finishes again at Union Square.

Your tour isn't over quite yet as you also get a take home gift! You'll receive this cool book with a little history on the Magic Bus and what it took to create. It also highlights some of the most important events in the US during the 1960s and early 70s. 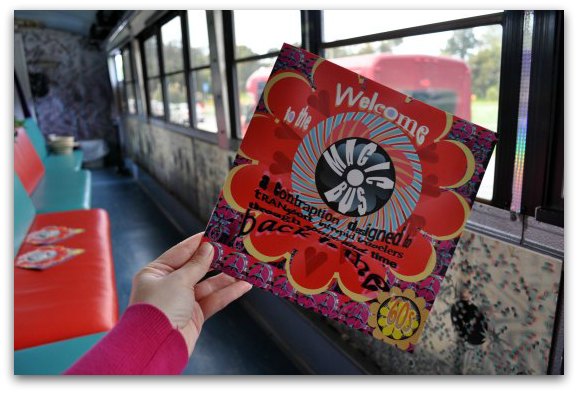 The colorful tour brochure for the Magic Bus Tour

Who Should Take This Tour?

This tour is a lot of fun and very engaging. As you enter the bus, you will smell the incense and hear the 60s music playing in the background, and you know you are in for a rare treat.

This is the perfect tour for those that loved the 60s or want to learn more about them. It's also a great experience for those that want to participate a little, sing along to the songs and let their imagination run wild.

It's also a outstanding choice for those that want a unique San Francisco experience.

I do want to caution you that this is not a kid friendly tour. It talks openly and in detail about the sex, drugs and rock & roll of the 60s.

Since this is a very specialized tour, it only runs two days a week in the winter. They run more often during the busy summer months. Here is the detailed scheduled for the Magic Bus in San Francisco:

The tour takes anywhere between one and a half to two hours. This is due to traffic. I'd play it safe and plan to be on this tour for at least two hours. Hey, you are going to the Summer of Love so mellow out and have some fun!

As I mentioned above, the tour starts in Union Square. You will meet the bus across the street from Macy's on Geary, near Powell Street.

Here is a map showing where the bus will pick you up in Union Square. The pick-up area is the red star. 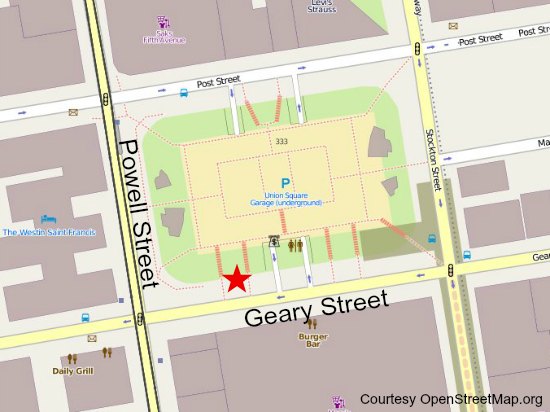 Don't miss out on your chance to travel back to the 60s. This SF tour does sell out at times, so make sure you reserve your seat online today.

Have an amazing journey and let me know what you think of this trip!