The Golden Gate Theater in San Francisco is one of the largest theaters in SF. Every year, you will find several large Broadway hits on stage. Performances run most of the year.

You will find the Golden Gate in the Theater District of SF near Union Square, the Tenderloin, and Market Street. You can easily access it from anywhere in the Bay Area by public transportation or car. 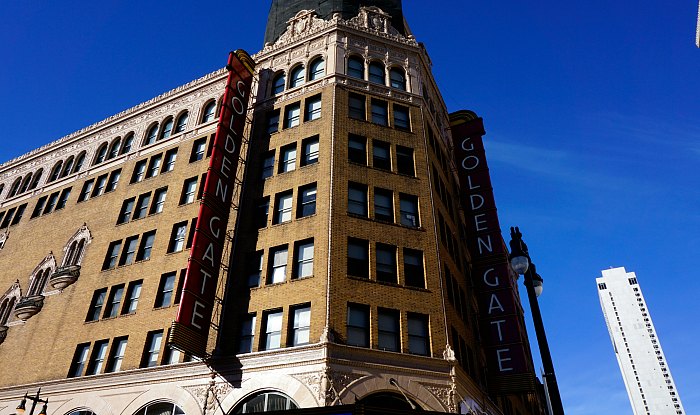 >> Find a full list of upcoming theater performances around SF

In addition to the Golden Gate Theater, San Francisco has dozens more theater venues, ranging from very large to intimate and alternative. At these SF theaters, you'll find shows all year long with a great variety of genres.

Follow the link to find out about all of the upcoming shows in San Francisco, including schedule and ticketing information.

>> Click here for a full calendar of theater performances in SF

Tips to Attend a Performance at the Golden Gate

The Golden Gate Theater San Francisco is located at 1 Taylor Street. It's close to Union Square and easy to get to from Fisherman's Wharf.

If you plan to drive, you will find plenty of places to park nearby. The bad news is that parking is very expensive in this area, so make sure to factor this in when you drive to a show. All four of these options are just a few blocks from the theater.

Golden Gate Garage, Turquoise Parking: 64 Golden Gate Ave. This is a dedicated lot for theater shows. It opens 3 hours before the show starts and closes 1 hour after.

Turk Garage/Lot, Turquoise Parking: 67 Turk St. This is a second dedicated lot that also opens 3 hours before the show and stays open for 1 hour after.

Since the Golden Gate Theater San Francisco is right near Market Street, you will find plenty of public transit options. These are some of the best.

BART: Exit at the Powell Station and head west on Market Street. The theater is about two blocks away.

How to Get Here from Fisherman's Wharf

The best way to get from Fisherman's Wharf to the Golden Gate Theater San Francisco is by cable car or the F streetcar.

Both the Hyde/Powell and the Mason/Powell cable cars stop at Powell Street. This is the last stop on the route and the closest one to the theater. Once you get off the cable car, simply walk to Market Street and head west two blocks.

The F streetcar will get you even closer. Get off at the Market and Taylor stop. You will be right across the street from the Golden Gate.

Here are some of the best hotels within a few blocks of the theater.

>> You can also find some of my additional recommendations for all budgets near Union Square.

Fun Places to Grab Dinner Before or After a Show

Here are a few places nearby where I often stop to grab dinner and/or a drink before the show.

What to Wear to the Theater in San Francisco

The theater atmosphere in San Francisco is usually more on the casual side, but going out for dinner and a play is a great excuse to get a little dressed up and enjoy the city's night life. You'll find guests dressed in everything from jeans and business-casual to semi-formal attire.

If you're going to attend a play at the Golden Gate, which is one of the larger, more ornate theaters, you'll want to dress a notch up from what you might normally wear while sightseeing during the day.

The Golden Gate Theater originally opened as a vaudeville house in 1922, then became a concert venue for famous artists including Nat King Cole and Frank Sinatra, and later served as a movie theater.

During its evolution, much of the beautiful interior was torn down in favor of a more modern appearance.

But in the late 1970s, the theater was restored to its Art Deco glory and opened as a performing arts venue by SHN, a major theater production company in SF led by successful Broadway producers.

Over the years, SHN has brought to the Golden Gate several musical hits fresh from Broadway, such as Jersey Boys and Avenue Q, as well as pre-Broadway premieres, including Wicked and Mamma Mia!

San Francisco Theater District: Are you looking for some additional tips to attend a show at the Golden Gate Theater San Francisco or other local theaters? Click here for an overview of this district, a list of upcoming shows, and other tips to visit.

SF Opera: If you love performing arts, then head over to the War Memorial Opera House to see a performance by the SF Opera. They offer two seasons a year, one in the fall and early winter, and another in the summer. Click here for a schedule of this year's shows.