Grab your tickets to see the San Jose Earthquakes soccer team in action. They are one of the original teams of the MLS and played against D.C. United in the first game of the league's history.

I've only had the chance to go to one game, but it's easy to get there from San Francisco or anywhere in the Bay Area. PayPal Park is about 10 minutes north of downtown San Jose and right next to Mineta International Airport.

Read on to find information about the Earthquakes' home games, ticketing details, and tips to attend a game.

Below you will find a list of games they play at home in 2023.

Where to Get Tickets

Scroll down to the stadium map below for a look at seating at the games. 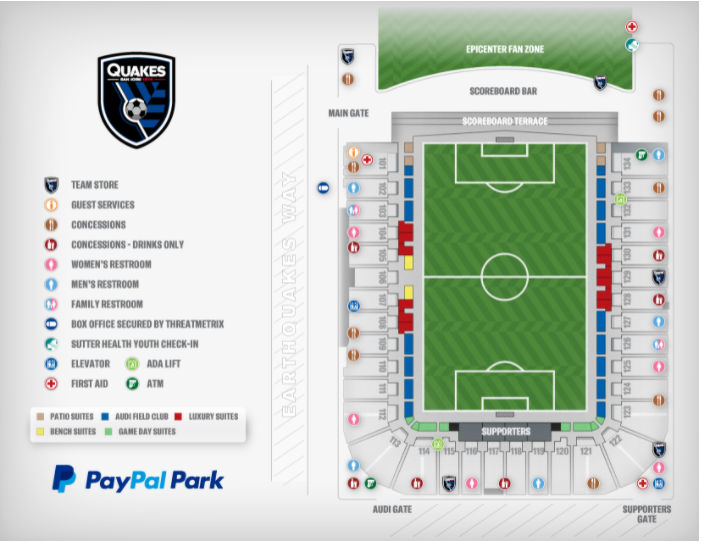 Hotels Near the Park

The location of PayPal Park offers you the chance to stay either downtown or at any of the airport hotels. Here are three top options close by:

About the San Jose Earthquakes

The San Jose Earthquakes (originally the San Jose Clash) are one of the 10 charter clubs of Major League Soccer. In fact, they participated in the very first game in MLS history in 1996, defeating D.C. United 1-0.

The Quakes briefly moved to Texas in 2005, becoming the Houston Dynamo, but returned to play in San Jose in 2008.

The team has played in many different stadiums over the years, including Kezar Stadium in SF, Stanford and San Jose State Universities, and the Oakland Coliseum. When the Avaya Stadium was built in 2015, it was the first ever pro soccer-specific stadium in the Bay Area. They changed the name in 2021 to PayPal Park.

The name Earthquakes came from a newspaper contest in the San Jose Mercury News, which received suggestions from fans.

In addition to the San Jose Earthquakes soccer team, you will find several other local Bay Area sports teams in action. We have several professional teams, which allows you to catch a game all year long.

San Francisco Giants: The SF Giants baseball team is another popular local sports team. They play at Oracle Park on the southern side of SF. Click here for their schedule and tips to attend a game.

SF 49ers: Just north of San Jose, you will find the San Francisco 49ers football team, which now plays at Levi's Stadium. Their season is from August to January. Click here to learn more.

More Sports in the Bay Area: If you are looking for additional pro and college teams in the Bay Area, click here for a quick overview of all of our local teams and more information on their current schedules.

Additional Fun Things to Do in the SF Bay Area