Best Live Music Shows in SF and the Bay Area

NOTE: Here is the latest on what's open and not open in San Francisco.

San Francisco concerts in October 2019 include String Cheese Incident at The Fillmore, Morrissey & Interpol at the Bill Graham Civic Auditorium and The Who at the Chase Center.

Around the Bay Area you will find top concerts in cities such as Oakland, San Jose, and Berkeley. Top performances include Van Morrison, Deadmau5, and Smokey Robinson. 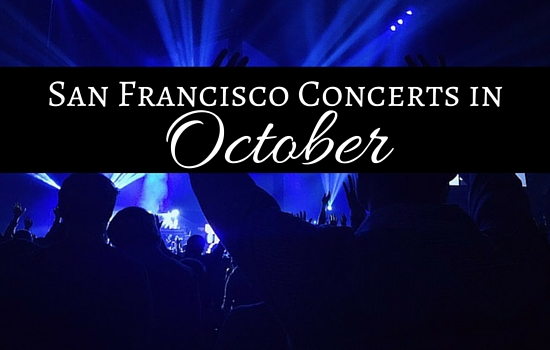 Click the links below to find ticketing details about these top San Francisco concerts in October.


>> Additional events in October in SF

>> More fun things to do this month

Here are a few additional concerts in the Bay Area this October. Click the links below for ticketing information.

You will find a variety of San Francisco concerts in October during Halloween weekend. Some will have a Halloween theme and all offer an unforgettable time during this popular holiday. Feel free to come dressed in your favorite costume or just dressed as yourself.

>> 21 and over parties this Halloween

>> More fun things to do on Halloween

Where to Find Tickets to San Francisco Concerts in October

You will find great tickets for San Francisco concerts in October on Ticketmaster. They offer tickets at venues such as the Warfield, the Masonic Auditorium at Nob Hill Masonic Center, and The Fillmore.

Another great place to find concert tickets is on StubHub. They are a third party reseller and they offer tickets to sold out shows. If a show is close to sold out or you want better seats than what is available on Ticketmaster, then this is the place to find them. I use them all the time and have had a great experience using their tickets.

Festivals with Live Music this Month

In addition to San Francisco concerts in October at local music venues, you will also find live music at some of our fun festivals. Here are a few places offering live music and concerts this month.

>> More details about this year's event

One of the most popular music festivals in October is Hardly Strictly Bluegrass. The event offers 3 days of live, free music in Golden Gate Park. The event featurs both local and internationally recognized artists. Previous performers include Cyndi Lauper, Chris Isaak, and Emmylou Harris.

>> More about attending this year's event

Head down to Fisherman's Wharf for more live music outdoors. The Whaf Fest is a street festival featuring not only live music, but also a Chowder Tasting Competition, a change to try a Segway, and so much more.

>> Details on this annual event

Enjoy a performance by the SF Opera. Each October, they perform several shows including classics such as Carmen, Madame Butterfly, and Don Giovanni.

The SF Jazz Center is another spot where you will find San Francisco concerts in October. They offer several performances a week from both local and internationally known artists.

You can also head over to the SF Symphony for additional San Francisco concerts in October. They perform both classic pieces as well as scores for popular movies.

Watch Broadway musicals at either the Orpheum or the Golden Gate Theater. Both offer a variety of performances each month. In addition, you will find a few smaller theaters with productions that run several times a week.

Other Fun Things to Do in October in San Francisco

In addition to these San Francisco concerts in October, you will find many other fun things to do this month in SF and the Bay Area. Here are just a few to get you started with your planning.

Halloween: SF is THE place to be to celebrate Halloween. Every year, you will find several 21+ parties, 21+ cruises, kids activities, and other events such as theater, opera, and more. Click here for details on this year's events.

Fleet Week: One of the biggest events every fall is Fleet Week. This event offers a free airshow featuring the Blue Angels on Saturday and Sunday afternoon, a chance to step aboard naval ships, and more. Click here for details on this year's event.