San Francisco concerts in June 2019 include Imogen Heap, Johnnyswim, and Lany at the Nob Hill Masonic Center as well as Judas Priest at the Warfield.

Other performances this month include Hillsong United at the Oracle Arena in Oakland, Train, Goo Goo Dolls and Allen Stone at the Shoreline in Mountain View, and Jeff Lynne's ELO at the SAP Center in San Jose. 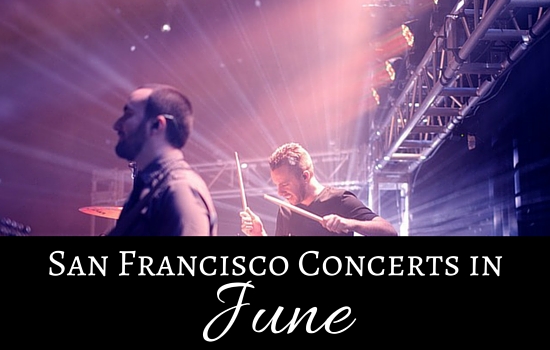 In addition to some of the top San Francisco concerts in June listed above, you will also find dozens of others shows all month long. Click the links below to scroll down for additional shows at each venue.


>> Additional events around the SF Bay in June

The list above is just a handful of the great shows around the SF Bay in June. Click the links below for additional artists on stage this month.

Ticketmaster: This is always a good place to find tickets. They offer first run tickets and do have a few resellers if you need tickets to a sold out event. Check tickets for San Francisco concerts in June.

Seat Geek: One of my favorite places to search for tickets to San Francisco concerts in June is on Seat Geek. I love their color coded tool that shows you which tickets are the best deals. They are a great place to find tickets to sold out concerts or even just to get better seats. Find their tickets here.

TickPick: Another ticket retailer that's great is TickPick. They are new on the scene and don't include hidden fees. So, the price you see for the ticket is the price you pay. It's refreshing to know what it will cost before you select the tickets you want. Check them out here.

Get calendars of additional San Francisco concerts in June by venue below.

Stern Grove: The annual Stern Grove festival offers free San Francisco concerts in June. All shows are on Sunday afternoon at 2pm and the festival starts in mid to late June every year. Find out more about this year's event.

SF Symphony: Our Symphony is a world class company with more than a dozen shows each month. Catch a classic performance or one of their modern shows such as their movie score nights. More about this month's shows.

In addition to our top San Francisco concerts in June, you will also find some great shows around the SF Bay. Top live music options for June include Berkeley, Oakland, San Jose, Saratoga, and Mountain View. 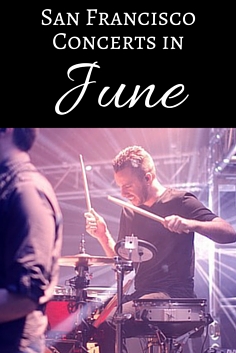 Other Fun Events in San Francisco this June

Street Fairs: In addition to San Francisco concerts in June, you will also find free live music at one of our many street fairs. This month, you can enjoy free entertainment at the Haight Street Fair, the North Beach Festival, the Union Street Festival, and more. Click here for a full list of street fairs this month in SF.

Pride Parade & Festival: One of the largest street fairs this month is the Pride Parade and Festival. This two day event features live music, dancing in the streets, and one of the most colorful parades in San Francisco. Click here for details on this year's festival.

Giants Baseball: If you love baseball, then head over to Oracle Park (formerly AT&T Park) to see the SF Giants in action. In June, you get the chance to catch one of almost a dozen games. Click here for this year's schedule.

All June Events: Are you looking for more fun activities this month in SF? If so, then head over to the June events calendar. In addition to concerts and festivals, you will find information on SF's top theater performances, wine tasting events, and other fun things to do. Check out the June calendar here.