SF Bay Area events in March include activities in Oakland, Berkeley, San Francisco, San Jose, and other locations. Top options include Hamilton at the Orpheum, Harry Potter and the Cursed Child at the Curran Theatre, Saint Patrick's Day celebrations, and concerts.

Other highlights include fun sporting events such as the Golden State Warriors basketball, the San Jose Sharks hockey, and more. Read on for a full list of things to do this month all around the bay. 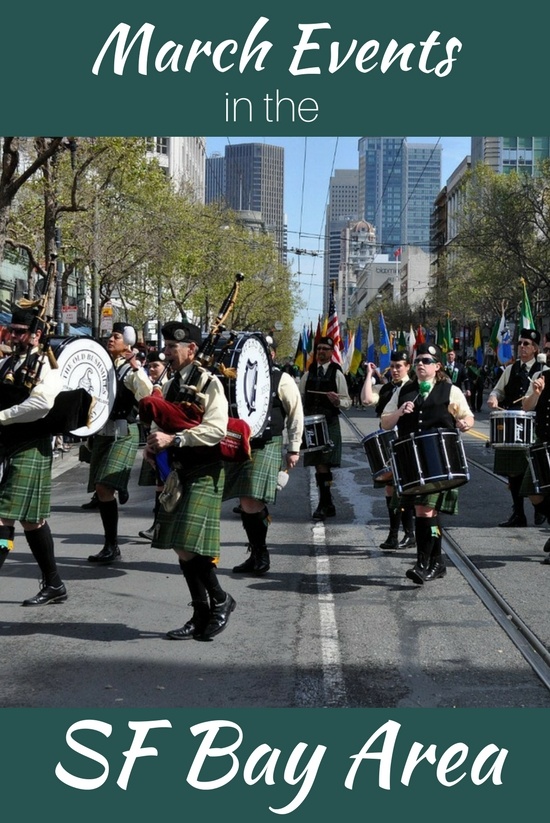 One of the big shows coming to the SF Bay Area during the month of March is the award winning theater performance, Harry Potter & The Cursed Child at the Curran. It's a look at Harry Potter's life as a father and teacher at Hogwarts. It follows his younger son who is getting ready to attend Hogwarts, but is facing similiar challenge as Harry did as a child.

Other shows include Hamilton at the Orpheum Theater in SF, Culture Clash (Still) in America at the Berkeley Rep, and They Promised Her The Moon at TheaterWorks in Silicon Valley.

>> More performances this month in SF

>> Shows all around the SF Bay Area

One of the biggest SF Bay Area events in March is in honor of Saint Patrick's Day, when everyone dresses up in green, Irish customs come to life, and leprechauns get to have their fun. On the Saturday before the holiday, downtown San Francisco also hosts a huge parade with dozens of floats, bands, bagpipes, and other Irish cultural groups.

It'll make its way down Market Street to Civic Center Plaza, where the all-day festival will be offering music, entertainment, and beer until 5pm.

Sports fans looking for fun and excitement should head to the East Bay to watch a Warriors game at the Chase Center in San Francisco. The energy of Bay Area crowds proudly donning blue and gold for their NBA Championship team is incomparable.

This month you have the chance to watch the Dubs take on the Washington Wizards, Los Angeles Clippers, the Denver Nuggets and more.

This March in the SF Bay Area you will find dozens of top concerts and live shows. Top shows in San Francisco this month shows at the Masonic Center in Nob Hill, Bimbos 365, the Chase Center, and Bill Graham Civic Auditorium.

Other top shows around the SF Bay include dozens of shows at Yoshi's in Oakland and at the SAP Center in San Jose.

>> Additional shows in SF, Oakland, and other venues around the SF Bay

Head to the South Bay to watch the San Jose Sharks play at the SAP Center downtown. This team routinely goes deep into the playoffs, so you know these fierce Sharks are in it for the win. This month at the Shark Tank, you can watch them take on the Minnesota Wild, Colorado Avalanche, and Boston Bruins.

California's beautiful wine country (about an hour north of San Francisco) invites visitors to discover its culinary and winemaking excellence during 6 full days of barrel tasting and more. This special event will allow you to taste wine, directly from the barrel, and buy "futures" since many of them are small batch and will not be available to normal customers at a later date.

You will also meet winemakers and experience the Dry Creek, Alexander and Russian River Valleys in a very magical way. There is a Toast the Future Friday Night Event on both Friday nights from 5pm to 7pm. The event will include futures tasting, current vintages, and appetizers. Winemakers will also be on hand to discuss their wines and answer questions. You must buy a separate ticket for these two events.

>> Details for this year's event

Head north to Fairfax for their annual Brewfest. This year, they will feature more than 20 brewers that will serve up more than 70 different brews.

From 1pm to 5pm, you can also enjoy traditional Irish dance music by The Gas Men. General admission tickets at $40 per person.

Jazz Bash by the Bay

The annual Jazz Bash by the Bay is one of the larger SF Bay Area events in March. It has been a tradition for more than 35 years in historic Monterey, a vibrant coastal city about three hours south of San Francisco.

Known for Cannery Row, written by John Steinbeck, this is now a world class city with some of the best restaurants, hotels and more. These three days will be full of all types of American jazz, from ragtime and swing to gypsy jazz, zydeco, and blues. If you love jazz music, plan a weekend getaway to enjoy the lively festival.

>> Visit their site for info on this year's event

All year round, SF hosts a slue of film festivals featuring different genres and topics. This March, you'll have the opportunity to catch several fun film festivals.

The biggest one each year is the Ocean Film Festival. It shows feature films, documentaries, and shorts about the cultural and environmental significance of the sea.

>> More on this month's film festivals

The Oakland Running Festival has become a fun annual event in this East Bay city, offering a marathon, half marathon, 4-person relay, 5K, and kids' fun run so that everyone can get involved. Come stretch your legs and celebrate the diverse community and beautiful scenery of Oakland, CA. The race starts from Eastshore Park near lovely Lake Merritt on Sunday morning. Registration is required to participate.

>> Visit their site to register

More Tips for Your March Visit