Theater, Sports, and Other Fun Things to Do this Month

NOTE: As of July 30, San Francisco and Bay Area counties are slowing the reopening process due to a spike in cases. Many large events, theater performances, and concerts are cancelled or postponed. Click here to stay up-to-date with what's open and opening soon.

Read on for more great things to do this month all around the Bay Area. 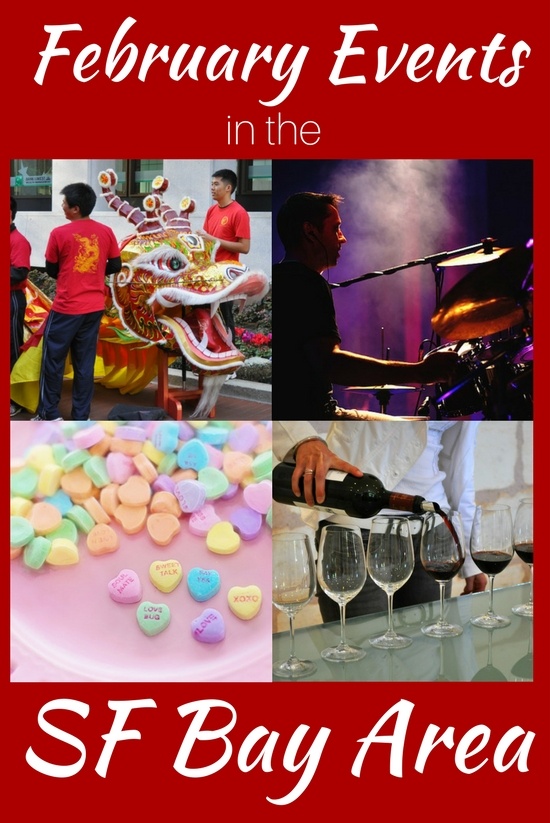 One of the best SF Bay Area events in February are the Golden State Warriors basketball games at the Chase Center in San Francisco. This month, they'll be taking on teams such as the Los Angeles Lakers, Miami Heat, and Houston Rockets. There is nothing like the energy of Bay Area fans decked out in blue and gold cheering on their Dubs, one of the hottest teams in the NBA.

>> Learn more about attending a game and ticketing information

For sports fans, one of the most exciting SF Bay Area events in February are happening in the Monterey region, about 3 hours south of San Francisco. This would of course be the highly anticipated AT&T Pebble Beach Pro-Am golf tournaments of the PGA tour, which arrives on California's coast this month at some of the most picturesque golf courses anywhere in the world.

For a whole week, you'll get to watch premier golf and entertainment in this serene setting.

>> Get more details on the Pebble Beach Pro-Am

One of the most anticipated SF Bay Area events in February every year is the annual Chinese New Year Parade and Festival. Watch as the streets of SF Chinatown come alive with this cultural tradition, including fire crackers, lanterns, drums, lion dancers, and a 28-foot-long Golden Dragon.

In addition to the parade, other lunar new year festivities include a basketball jamboree, Miss Chinatown pageant, community street fair, and 5K/10K run/walk. The entire festival lasts for several weeks.

>> Tips to attend this year's event

Don't miss your chance to see the Bay Area's favorite hockey team, the Sharks, take on top NHL teams at home in San Jose (South Bay). This month, they will host teams such as the Tampa Bay Lightening, Calgary Flames, and the Pittsburg Penguins. Head on over to the SAP Center (a.k.a. the Shark Tank) to get in on the action.

>> Get additional details to see a game in San Jose

Some of the most popular SF Bay Area events in February are the theater performances happening at different venues all around the Bay Area. They range from Tony Award-winning Broadway musicals to classic works to independent pieces.

This month in San Francisco, you can watch Hamilton at the Orpheum, Harry Potter and the Cursed Child at the Curran Theater, Sponge Bob the Musical at the Golden Gate Theater, and Becky Nurse of Salem at the Berkeley Rep.

>> Theater calendar for top venues around the Bay Area

Every month, you'll find a great variety of live music events to choose from all over the Bay Area. They range from small performances at intimate cafes and local clubs to sold-out shows of today's biggest stars at huge sports arenas. This month offers a great selection here in San Francisco.

You'll have the chance to see shows at Oracle Arena in Oakland, the Bill Graham Civic Auditorium in San Francisco, and the SAP Center in San Jose.

>> Calendar for shows all around the SF Bay

If you're going to be in town for Valentine's Day, you'll find plenty of ways to make it memorable for your loved one. Several top SF restaurants offer special prix fixe menus Valentine's evening. You can also check out my list of the top five most romantic bars and hotels.

If you're looking for a bit of adventure mixed with the luxury of fine dining, check out the bay cruises and wine tasting events. For those interested in a more cultural, intellectual outing, head to the symphony or theater.

The San Jose Jazz Winter Fest kicks off on February 15 and lasts until February 28. This annual event features both well known jazz talents as well as up-and-coming artists on stage. They will perform at locations all around town including Cafe Stritch, Hedley Club, Deluxe Eatery, and others.

Enjoy the best of standup at SF's top two comedy clubs. This February, you'll have the chance to watch top comedians live on stage at Cobb's in North Beach. You can also catch shows at the Punch Line in San Francisco. And if that's not enough fun for you, check out BATS Improv or other local shows.

>> Where to laugh the night away this month

The weekend after Valentine's Day is a three-day weekend due to the President's Day holiday on Monday, February 17. To take advantage of the extra day off, perhaps you'll want to keep celebrating with your sweetheart by taking a romantic cruise on the bay, or maybe you'll want to break the routine with an exciting whale watching tour on the ocean.

You can also join a free walking tour, watch Hamilton at the Orpheum Theater, or sample wines at the Chronicle Wine Tasting Competition.

>> What to do this President's Day Weekend

People usually come to the SAP Center in San Jose (South Bay) to watch the Sharks play a fierce game of hockey, but this week, the stadium will be packed full of families and Disney fans watching Mickey's Search Party by Disney on Ice.

This show features beloved Disney characters such as Mickey, Minnie, and others, so there's a little something for boys and girls of all generations. Clap along and marvel at the high-speed stunts as your favorite characters' dance and come to life on ice.

>> Find tickets to these shows in San Jose

Some of the best SF Bay Area events in February feature delicious local and domestic wines and offer a true gourmet experience right in San Francisco. At the huge Chronicle Wine Competition, you'll have the opportunity to try award-winning American varietals from more than 800 wineries.

It's the largest American wine competition in the world and one you do not want to miss! Get your tickets early to secure your spot.

More Things to Do in the SF Bay Area