The Bay Area theater calendar includes performances in San Francisco, the North Bay, San Jose, Oakland, and more. You will find a variety of options from large Broadway productions to wonderful shows at smaller local theaters.

Below you will find a schedule of top performances for each region within the greater Bay Area, as well as details on where to find more productions and how to get the best tickets.

You will find dozens of shows in San Francisco every week. This is where you will find most of the big Broadway productions such as Wicked, Hamilton, and The Book of Mormon.

If you want to see a full list of shows, click here for a detailed theater calendar for San Francisco.

Another city with a popular Bay Area theater calendar is San Jose, just over an hour south of SF. Here you'll find several musicals, Broadway hits, and smaller shows throughout the year. All shows are at The Center for Performing Arts at 255 Almaden Boulevard in San Jose.

Below are some of the top shows on the San Jose theater calendar for this season.

My Fair Lady is a musical based on the play Pygmalion by George Bernard Shaw. The play centers around the character of Eliza Doolittle, a working-class girl who is trying to improve her station in life. To this end, she agrees to be taught how to speak like a lady by Professor Henry Higgins.

The musical follows their journey as Eliza attempts to learn the intricacies of proper speech, and Higgins tries to turn her into a sophisticated lady. Along the way, the two characters fall in love with each other, but their different backgrounds threaten to keep them apart.

Ultimately, My Fair Lady is a fun and wonderful story about social mobility and finding love in unexpected places.

John Adams, and others, decide that they no longer want to live under the rule of the British empire. Adams tries to get the Continental Congress to declare independence so this country can have freedom and allow for freedom to ring.

We all know the ending, but now you can know the beginning and more. This show runs for 2 hours and 20 minutes with one intermission. It is recommended for ages 10 years old and over.

This musical is a stage adaptation of the 1988 Tim Burton film of the same name. The story follows the ghost of a teenage boy named Beetlejuice, who is trying to haunt the home of his former girlfriend, Lydia Deetz.

However, Beetlejuice finds himself competing with the Maitlands, the current occupants of the house, as well as with Lydia's new boyfriend, Adam. The musical features songs written by Eddie Perfect, with a book by Scott Brown and Anthony King.

The show made its Broadway debut in 2019 and has been nominated for numerous Tony Awards.

The Tina – The Tina Turner Musical is a musical based on the life of the singer Tina Turner. The musical follows Tina's journey from her humble beginnings in Nutbush, Tennessee to her meteoric rise to fame as one of the world's most iconic performers.

Along the way, the musical showcases some of Tina's most famous hits, including "River Deep – Mountain High," "Proud Mary," and "What's Love Got to Do with It." The musical also captures the highs and lows of Tina's personal life, from her abusive marriage to Ike Turner to her triumphant comeback in the 1980s.

Ultimately, The Tina – The Tina Turner Musical is a celebration of a true legend and her incredible story of strength and resilience.

The Bay Area theater calendar for the East Bay includes performances in Berkeley, Oakland, Walnut Creek, and other cities. Many of these shows are an easy to get to on BART public transportation. Here are the top upcoming shows.

Coastal Rep in Half Moon Bay

You will also find a full Bay Area theater calendar at stages all around the North Bay. This region hosts many smaller and first-time productions. The theaters are often more intimate, giving you the chance to get up close to the stage. In addition, you will find some larger outdoor productions each summer.

The 6th Street Playhouse is a renovated 107-year-old Del Monte cannery located in historic Railroad Square in Santa Rosa. The square now operates as a quaint little shopping area where you can grab coffee, dinner, or a glass of wine before or after the play.

This playhouse is home to two North Bay theater companies, which present everything from dramas to popular musicals to children's shows, from August through May.

Cinnabar Theater was created by San Francisco Opera singer Marvin Klebe in 1970, when he and his family decided to transform a two-room schoolhouse in Petaluma into a lovely community space for performance and creative collaboration.

You can catch North Bay theater performances--from Tony Award-winning musicals to contemporary plays--from September through June, as well as concerts and performances by Cinnabar's Young Rep group. Most shows are only performed on weekends.

Ross is a very small town just west of San Rafael. There, in the 1930s, Beth Lloyd and a group of women founded the Ross Valley Players theater company as a way to cope with the Depression, later transforming an old rundown barn into theater it is today.

Throughout the year, the Ross Valley Players offer six plays, plus one full-length production of an original, provocative piece by a Bay Area playwright. Their work is diverse and aims to not only entertain, but to enliven the human spirit. Each new season starts in September and you can catch performances through August. Most shows are only performed on weekends.

Are you looking for additional events in San Francisco and the Bay Area? Click the links below for a full calendar of events for each month.

Opera: The SF Opera is another popular performing arts option. They have two seasons each year, one during the fall months and the other during the summer from June to July. They produce many classic operas, including Madame Butterfly, La Boheme, and Carmen. Click here for this season's SF Opera shows.

Ballet: The SF Ballet was the first company to perform the Nutcracker in the US, and they continue to delight audiences during their annual performances of this Christmas classic. They also offer a full season of shows from January to May. Click here for details on seeing this year's Nutcracker performances or one of their regular season shows.

Symphony: The SF Symphony performs throughout the year. Each month, they offer around a dozen shows. You will find classical performances, as well as nights when they play scores from a specific movie. Some of their other shows feature well known singers and conductors. Click here for a full schedule of SF Symphony shows this year. 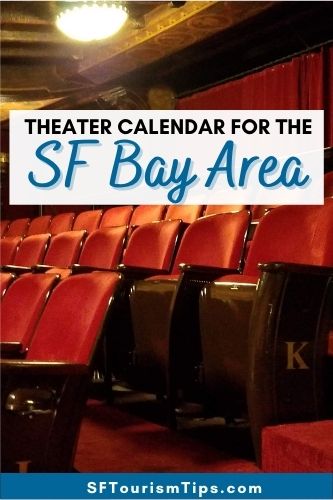