Biography of Al Capone: Who Was This Infamous Prisoner of Alcatraz?

Who is Al Capone? How did he end up at Alcatraz? Learn more about the biography of Al Capone, one of the most infamous prisoners of Alcatraz.

The Al Capone biography starts in Brooklyn in 1899. He was born to Italian immigrants that came to the US in 1893.

Alphonse Gabriel Capone was the one of nine kids. His family included seven boys and two girls. He was the fourth boy born in the family.

Capone grew up in a rough neighborhood. The biography of Al Capone continues when he quits school at the age of fourteen.

Capone became involved with Johnny Torrino early in his life. A prominent gang leader in New York, Torrino took Capone under his wing and became his mentor.

A few years later, Torrino recommended him to another friend, Frankie Yale. The role with Yale was Capone's first role in an organized crime ring. Capone played bartender and bouncer at Yale's bar, the Harvard Inn on Coney Island.

While working at the bar, Capone got into a fight which left the infamous scars on his face. 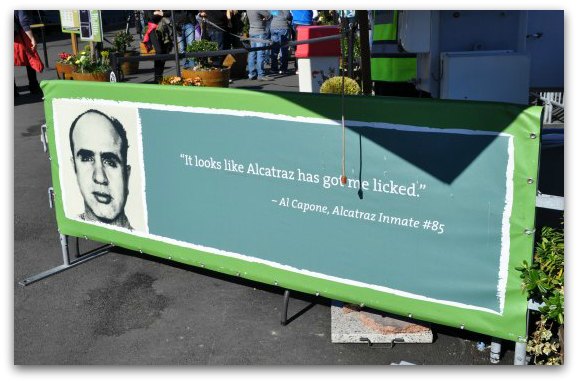 A quote from Al Capone in the Alcatraz Ferry waiting area about what he really thought about Alcatraz.

The biography of Al Capone continues in December of 1918, when his first son Albert Francis Capone was born. A few weeks later, he married the mother of his child, Mary "Mae" Coughlin.

For a short time after the birth of his son and his marriage, Capone took on a legitimate job and removed himself from the criminal world. However, he remained in close contact with both Yale and Torrino.

The Biography of Al Capone and His Move to Chicago

Years earlier, Torrino moved to Chicago and was steadily building his organization. Torrino saw a huge opportunity for further expansion when the Prohibition Law passed in 1920.

The biography of Al Capone continues when he was recruited by Torrino. He moved to Chicago in 1921. This move proved to be a significant turning point in Capone's life.

He received $25,000 a year plus profits for his role in Torrino's organization. Together, they built the biggest and most profitable bootlegging business in Chicago.

By 1929, he was one of the most powerful men in Chicago and was estimated to be worth more than $60 million.

In 1929, Capone was ready to take out his larger rival, George "Bugs" Moran. He instructed his gang to take out Moran's entire organization from the bottom up until everyone was gone.

His organization pulled together a plan to meet up with the rival gang on Valentine's Day. Moran's gang originally thought the meeting was to buy unbelievably cheap liquor. When they arrived, they ran into Capone's crew in police uniforms.

Thinking they were busted by the police, Moran's gang lined up along the wall to be arrested. Capone's gang proceeded to shot them one by one. This event was the most famous mass murder in history up until that time and it was dubbed the St. Valentine's Day Massacre

Why Was He So Famous?

The massacre received national coverage. It's just one of the reasons why Al Capone is so famous.

In addition to his numerous crimes, he also had the character and finesse to manage his image. He always thought of himself as a business man. He also never walked away from public attention including the press.

As part of his brand, Capone maintained his innocence to these horrible crimes. He continually positioned himself as a faithful family man.

The ability for him to create mystery around his life was another reason for his fame. Many people were horrified by him and his actions. Others were fascinated and wanted to learn more about the real biography of Al Capone.

The interesting thing about the biography of Al Capone is that he was charged for many different crimes. However, he was only convicted and sentenced to jail on a few minor violations.

As you can imagine, some of his convictions were mysteriously dropped, showing the overall power of Capone and the people he associated with.

Capone did serve some jail time before the ultimate crime that brought him down. He was caught in Pennsylvania with a concealed weapon in 1929. He was sentenced and served one year in jail.

The Downfall of Al Capone

When President Herbert Hoover was elected he decided it was time to take down the kingpin of crime in Chicago. He felt that Capone's image and actions were out of control and he needed to be stopped.

It took almost five years of investigating and in 1931 Capone was charged with tax evasion. During the investigation, many of Capone's crimes were uncovered. However, it was the tax evasion charge that made the case.

He was sentenced to 11 years in prison in 1932. After his appeals were denied, he was transferred to the Atlanta Penitentiary to serve his term.

He was able to continue to work the system, even behind bars. He manipulated the guards and ended up with a decked out cell. He was also paying some of the guards to work for him.

Because he had so much control over his current situation, the director of federal prisons felt that Capone was the perfect candidate for Alcatraz. In 1934, he was among the first prisoners brought to the new federal prison.

FUN FACT: Al Capone was also the reason that the first prisoners made it all the way to Alcatraz by train. He was such a powerful man that authorities thought his men would try an escape attempt the minute he walked off the train. To prevent this, they loaded his entire train car on a barge. Capone then got off his train car once it reached the island!

At Alcatraz, he became known as inmate number 85. From the beginning, he worked hard to manipulate the system. However, the warden at Alcatraz denied all of his attempts to get special treatment.

Capone was ordered to follow all the rules. At the time, Alcatraz had a rule of silence. Because of these, Capone became just another prisoner serving time.

He received favorable remarks for the work he was assigned. He passed the time by reading magazines and playing the banjo.

However, Capone was not able to fully stay out of trouble. He got into some fights and ended up in solitary confinement. He was also caught destroying his clothing and misbehaving in other ways.

By 1937, he spent more and more time alone in his cell. His behavior also became stranger every day.

At this time, he was diagnosed with Syphilis and was reported to have dementia due to the advanced stages of the disease. He was transferred to the prison hospital at Alcatraz where he stayed for the remainder of his time here.

The biography of Al Capone continues in January of 1939, when he was transferred out of Alcatraz. He was moved to another facility and then paroled at the end of the year.

The Biography of Al Capone Ends

Even though he wasn't diagnosed until 1939, it is documented that Capone contacted Syphilis sometime before his marriage and the birth of his first son. No one knows for sure when he contracted it, but from what I read, everyone agrees it was around 1918. 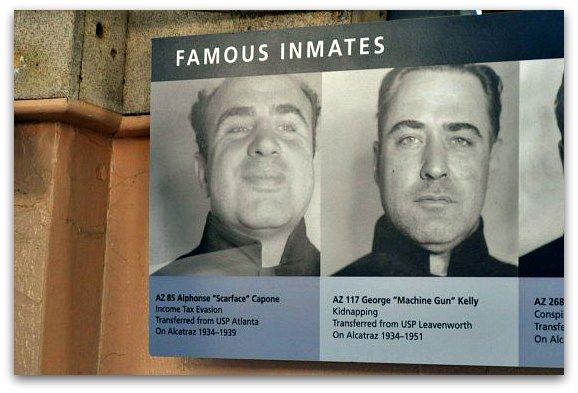 A sign on Alcatraz Island showing Al Capone's official mug shot (as well as those of several other infamous prisoners of Alcatraz).

Syphilis had a major impact on his life. Left untreated, Syphilis can lead to dementia and personality changes. These symptoms started to show while he was at Alcatraz.

Some think that if he was treated early on for the disease, his rage would have stayed in check. They believe the disease and the strange behaviors from the disease are another reason for his huge success in the crime world.

After he was released from prison, Capone underwent a variety of treatments for his disease. He was the first person to receive penicillin in an attempt to treat his Syphilis.

The biography of Al Capone ends with his death on January 25, 1947 in Miami, Florida. He was buried in Mt. Olivet Cemetery in Chicago. Only a small group of mourners attended his final memorial.

No one will argue that Al Capone was one of the most infamous prisoners of Alcatraz. The biography of Al Capone starts from humble beginnings, to riches and fame and ends quietly at the young age of 47.

One of the best most recent accounts of his life is in a book written by his grandniece. For a long time, she tried to separate herself from the Capone name. Recently, she wrote a book about what it was like in the Capone household during these times.

It's an interesting read and one that will take you even closer to understanding the true Al Capone: Uncle Al Capone: The Untold Story from Inside His Family.

You can also find a number of other books on Al Capone. Each one talks even more about this infamous man, the people around him and his time in Alcatraz.

Discover More Details on the History of Alcatraz

Planning a Visit to Alcatraz?

Here are some additional things you may want to review to help you plan your visit to Alcatraz Island - where you can learn even more about Al Capone.