What Causes Earthquakes? Learn More about Tremors and How They Affect the SF Bay Area

Find out more about what causes earthquakes and other facts for the San Francisco Bay Area.

First, it's important to note that earthquakes happen many miles below the earth's surface along fault lines—the cracks between tectonic plates, which are the big slabs of rock that make up the ocean floor and carry the continents on top.

For this reason, geologists can only study earthquakes from a distance. They use a number of different tools that not only help them pinpoint the location of certain tremors, but also help them better understand their cause. 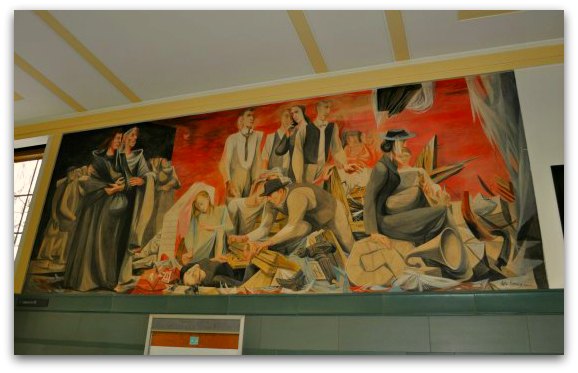 A Rincon Center mural depicting the devastation from the 1906 earthquake and fire in San Francisco.

The depth at which earthquakes occur also makes it challenging to predict them. Geologists study the ground near major faults to look for changes in the earth. They also study a number of labs set up to replicate the environment, including temperature, depth, and other factors.

So, what causes earthquakes? Rock on a fault line crumbling, exploding, or moving due to extreme tension.

What I didn't realize when I moved here was that there are a number of earthquakes everyday throughout California. The good news is that most of them are a 3.0 or smaller, so you can't even feel them.

The smaller ones are necessary and welcome since they help relieve some of the tension in the fault lines. If the tension gets too high, then larger earthquakes occur.

Some interesting earthquake facts are that California has tens of thousands of them each year, and that around 5,000 or more of those are in and around the San Francisco Bay Area. Even though there are a large number every year, the likelihood of you feeling one while you visit is pretty small.

To understand what causes earthquakes a little better, read on for more information about fault lines, the types of waves that occur when one strikes, and a quick overview of the Richter Scale.

There are three different types of faults that create earthquakes: the normal fault, the reverse fault, and the strike-slip fault. Each one moves in a unique way, which allows geologists to track the type of quake that has occurred.

The San Andreas fault is the most well known in the San Francisco area. It is a strike-slip fault, and is believed to have caused both the 1906 Earthquake & Fire and the 1989 Loma Prieta Earthquake. It runs under the Santa Cruz Mountains, up through the Peninsula, near the Golden Gate Bridge, through part of Marin County, and then out to the Pacific Ocean.

Another notable fault line in the area is the Hayward fault. This one runs through the east side of the San Francisco Bay Area. It runs from Hayward up through Berkeley (the UC Berkeley football stadium sits right on top of it!) and north into the bay. This is the fault scientists are watching closely because it has been so long since the last big earthquake on it.

The other fault lines around the area are not as well-known.

When the rock along a fault ruptures, explodes, or moves dramatically, it creates waves that ultimately do most of the damage. This is typically what people report when they talk about feeling an earthquake.

There are three different types waves: the P wave, the S wave, and the surface waves. Both the P and S waves travel through the earth and are called body waves. The P wave is faster; the S wave travels a little slower.

Surface waves are the ones that do the most damage. They travel along the surface of the earth, creating the ripple that people feel after the quake occurs.

Geologists track all three types to determine when and where a quake originated. Since all three travel at different speeds, the geologists are able to quickly determine the originating location of it.

Measuring and Understanding the Magnitude of an Earthquake

Now that we've covered some basics on what causes earthquakes, let's talk a little about how they are measured. The most popular type of measurement of an earthquake is called the Richter Scale.

Created by Charles Richter in 1935, the Richter Scale is an internationally recognized way of measuring the magnitude of a quake.

Most tremors are under 3.0 and are rarely felt by people in and around the epicenter. Once an earthquake reaches the 3.0 mark, the waves are strong enough to be felt from a distance away.

The Richter Scale was not in existence during the 1906 San Francisco earthquake. However, based on research and measuring the damage that occurred, scientists estimate that the quake was around a 7.8. The 1989 Loma Prieta earthquake was a 6.9 on the Richter Scale.

Find even more San Francisco earthquake facts from these earthquake books including first-hand accounts, historical pictures, and more details on how they happened.

When Is the Big One Going to Hit?

So, you are probably also wondering about when the next one is predicted to happen. Well, this is a tough question to answer. Based on the most recent report released in 2003, geologists estimate that there is a 62% chance that a 6.7 or larger will hit the area in the next 30 years.

This is a tough statistic to grasp, since there are a lot of 'ifs' involved. However, they do estimate that the chances of the next big one hitting soon is more likely than not.

They also predict that it will hit closer to an urban area than the 1989 Loma Prieta. If this is true, then a lot more damage will occur than in 1989.

Learn More About SF's Earthquakes During Your Visit

Almost any tour you go on or historical museum you visit, you will get the chance to learn a little more about the earthquake facts for this area of the county. Many focus on the big one, the 1906 earthquake and fire.

If you want to learn even more, the following museums and tours offer you a few more details.

Fire Department Museum: This little museum talks about all the big events for the Fire Department in San Francisco. You get to see one of the first fire engines in SF (it's so cute!) and memorabilia from the 100+ years the fire department has been around. They also have a small exhibit on the 1906 earthquake. Many of the items shown burned in the hot flames that started shortly after the quake hit. It's a little off the beaten path and free to visit.

Wells Fargo Museum: The Wells Fargo Museum in the Financial District also has a small exhibit on the 1906 earthquake and fire. This one's great because it shows a map of the damaged areas. You will also see a few articles about the destruction. The image below also shows the headline from the local SF newspaper the day after it hit. 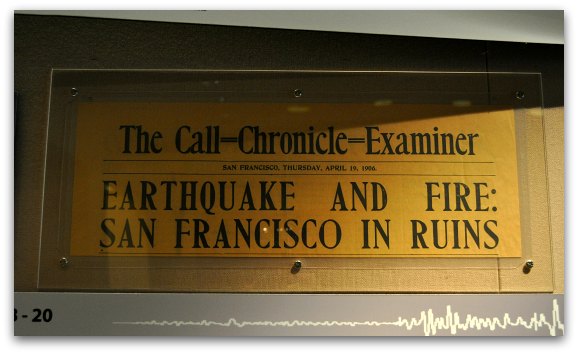 The headline in the SF newspaper the day after the 1906 earthquake hit.

SF Public Library Walking Tours: The SF Public Library offers several free walking tours every day. At the moment, they offer two tours dedicated to the impact of the 1906 earthquake and fire. Both take you through the downtown area, which suffered the most due to number of people and the buildings in this area at the time.

Tips for Handling an Earthquake

There are a few things for you to keep in mind if you find yourself in one while visiting. Here are some earthquake facts and tips to remember:

As I mentioned before, the odds of you finding yourself in an earthquake while visiting San Francisco are very, very small. If you do feel one, it will most likely be a really small, short earthquake with little or no damage.

Military History Attractions: The SF Bay Area was a hotbed of military activity for more than a hundred years. Today, you can visit many of the sites including the Presidio, the WWII vessels on Pier 45, and the historic Fort Point National Historic Site.

Aquarium of the Bay: If you are visiting SF's Pier 39, a must see is the Aquarium of the Bay. This well-done museum offers a look under the waters of the SF Bay. It features hundreds of plants and animals that call the bay their home.

Fisherman's Wharf Hotels: Are you looking to stay in the famed Fisherman's Wharf district? On this page, you will find some of my top recommendations for this neighborhood. Options range from four-star hotels to budget friendly two-star accommodations.