Loma Prieta is one of two famous quakes in SF. The other one is the 1906 earthquake.

The Moment It Hit 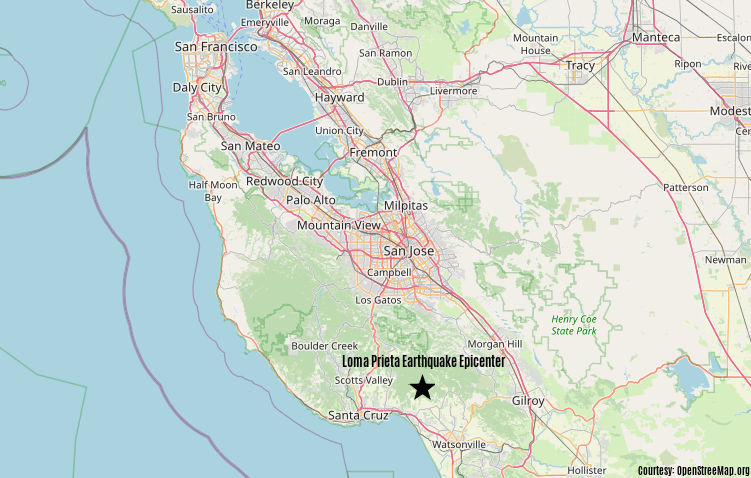 This gives you a rough idea of where this earthquake's epicenter was compared to San Francisco.

This one originated on the San Andreas fault in the Santa Cruz mountains. It got its name from the mountain where the shaking started, Loma Prieta.

The epicenter was just over an hour south of San Francisco. Other places around the SF Bay area also sustained quite a bit of damage during this earthquake.

Downtown Santa Cruz, less than 30 minutes from the epicenter, had significant damage.

Notably, this and the 1906 earthquake were caused by breaks along the same fault line.

This is a newer photo but will give you an idea of what was happening on the field when the 1989 earthquake hit -- right before the game started.

Game three of the 1989 World Series was just getting started in SF that night. It was scheduled to begin at 5:15 pm, and the live broadcast had just started. This one was caught on film and is the only major quake broadcast live on TV.

It's also interesting to note that the World Series that year was between the two Bay Area teams: The Giants and the Oakland A's. After the first shock, everyone in the stadium felt it but wanted them to start the game anyway. Many started chanting "Play Ball."

Little did they know at the time how much damage had occurred in San Francisco, Oakland, and around the SF Bay Area.

After the quake, they postponed game three of the World Series for ten days. Before they began the series again, there was quite a bit of discussion about whether or not Candlestick was safe enough to play in.

Many thought it was too dangerous to play in with this large of an earthquake, but they did continue, and the series finished just two games later, with Oakland taking home the top prize.

It's interesting to think that the level of injury from this one was most likely less than it could have been due to the timing of the start of the World Series game. Fewer people were on the roads. Many left work early, and a lot of people were already stationed in front of their TVs to watch the game.

If more people were on the roads during rush hour that night, the death toll and number of people injured probably would have been higher. After the initial shake, several more minor yet intense aftershocks continued to rock the city.

It was about 70 miles south of SF, but the damage in the city was huge. 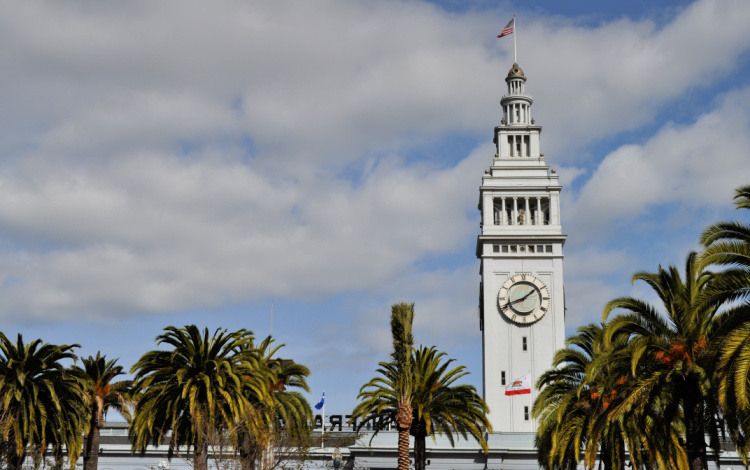 Our beautiful Ferry Building is no longer hidden behind the large freeway that was severely damaged during this earthquake.

Damage to the Double-Decker SF Freeway

Before this one hit, there used to be a freeway along the Embarcadero and in front of The Ferry Building. It was a popular route and allowed people to get through the city much faster.

However, it was pretty ugly, and many locals didn't love the look of it.

After this earthquake hit, quite a bit of this freeway running through the city had to be torn down due to damage from the quake.

It was a double-decker freeway with two levels of lanes. The damage was so significant that there was no way to repair the roadway, so it had to be removed.

The city still has not rebuilt that portion of the freeway. This decision pleases locals as this part of the waterfront has been redone and is now gorgeous with the Ferry Building, the Exploratorium, and several wonderful restaurants near the water.

Damage in the Marina District

As with the 1906 San Francisco earthquake, fires began to break out in the city after it hit. The main area that was impacted was the Marina District.

This district in the city is built on landfill, not hard stone or rock. The ground in this area was not able to absorb the forceful shaking from the earthquake, and several buildings toppled over.

When the buildings collapsed, it broke gas lines, and several fires started. The difference this time is that the fires were quickly put out by high-powered hoses and water from the bay.

Locals that lived in the area also worked together to help with the fires. They helped connect longer fire hoses that ran from the SF Bay waters to buildings and homes in this district.

The city of Oakland, right across the bay, also suffered quite a bit of damage from this one. The biggest issue was when a 1.25 segment of the Cypress Street Viaduct (along Highway 880 - also called the Nimitz freeway) collapsed.

The top section fell onto the cars on the bottom section. Forty-two people died.

This section did sit over the water, and the bottom section held up, so it didn't completely collapse into the water.

Many residents that lived nearby in West Oakland started to do whatever they could to help rescue those trapped on the bridge.

Although the bridge was eventually fixed enough to get the traffic moving again between the East Bay and San Francisco, it was eventually condemned. They started building a new section (right next to the old one) on January 29, 2022. It took eight years to complete the section, and it opened on September 2, 2013.

It's now considered to be one of the safest places to be when an earthquake strikes.

Overall there were 63 deaths from this San Francisco earthquake. In addition, there were over 3,500 injuries, and over 8,000 people became homeless.

San Francisco and the surrounding Bay Area learned quite a bit from this earthquake. They found that many buildings needed more and better retrofitting.

Where to Learn More About SF's Earthquakes

These San Francisco Earthquake books include even more facts about the famous earthquakes in the region. They have first-hand accounts of what it was like during the shaking and what it took to rebuild after each one.