Monterey Museum of Art: Tips to Visit This & Other Top Museums in Monterey, CA

A visit to the Monterey Museum of Art offers you the chance to see everything from early California paintings to magnificent photography. During your visit, you will also see contemporary pieces and popular visiting exhibits.

You will find the museum in two locations within Monterey, CA. 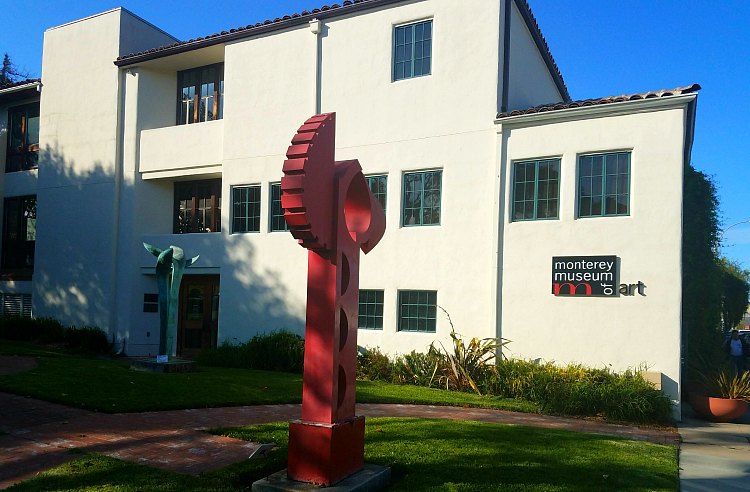 This three-story landmark building in the downtown area houses eight galleries. All of the pieces at this location focus on American and early California contemporary art, painting, and photography.

This location also offers an art reference library where visitors can read and research during museum hours.

The second location is less than two miles away on a beautiful, historic property. The La Mirada galleries sit in an elegant home in one of Monterey's oldest neighborhoods.

This location features more contemporary galleries and the visiting exhibits. Make sure you also step outside to see the museum's gorgeous rose garden.

Here are just a few more details on the permanent collections at the Monterey Museum of Art.

Admission to La Mirada by appointment only.

Insider's Secret: Before your visit, ask your hotel or look around town for the Monterey Museum of Art pamphlet. On the back, they often feature a 2-for-1 admissions coupon.

These hours are for the Pacific Street location only.

The Monterey Museum of Art closes on Thanksgiving, Christmas Day, and New Year's Day. The museum may be closed for winter break between December 23 to January 2 depending on the year.

Although most people talk about the Monterey Museum of Art, this waterfront town also houses several other interesting museums. Many focus on the events that occurred in the area prior to and shortly after the time when California became a part of the United States.

Here is a quick overview of the other top museums you can enjoy during your stay in Monterey.

Originally built as a school and town hall, its rooms were used by the state's early leaders to draft the first California Constitution in October 1849. Today, you can visit this landmark and see a re-creation of the meeting room used to draft this important document. The Colton Hall Museum also offers a handful of exhibits on the early days of Monterey.

The Custom House is the oldest government building in California and is State Historic Landmark #1. In its early years, the government used it as a point of entry into Alta California from Mexico. It's also the location where Commodore John Drake Sloat claimed over 600,000 miles of territory for the US by raising the American flag.

Today, you can walk through this building to see what it looked like in the 1840s and take a look at several artifacts from that time. It's one of the buildings in the Monterey State Historic Park group.

Hours: Every day 10 am - 4 pm JILL: The hours of the building are incredibly limited

Another museum included as part of the Monterey State Historic Park is the First Brick House. This is where Gallant Dickinson introduced a new, more permanent method of building houses. Prior to 1847, all houses were made of adobe and didn't last long. Gallant built his house out of brick. Stop by to visit his original house and the Monterey history exhibits in the main room.

Location: Heritage Harbor next to the Old Whaling Station

If you are traveling with kids, you will want to stop at this hands-on children's museum. Exhibits here include My Build-a-House, My Theater, and My Go-Fore Golf. Each exhibit targets a specific age group so your kids can find an activity that's perfect for them.

The Pacific House Museum is one of several museums and historic buildings that make up the Monterey State Historic Park. Built in 1847, this Monterey Museum features exhibits that tell the story of Monterey when it was the capital of California under Spanish and Mexican rule. It also houses the Monterey Museum of the American Indian where you will see pottery, baskets, and other Native American artifacts.

Hours: Every day from 10 am to 4 pm JILL: The hours of the building are incredibly limited

The Presidio of Monterey Museum houses exhibits featuring the history of military development in the area. It starts with the indigenous period, transitions to the time when Spain and Mexico ruled the area and ends with the present. Due to the area's importance starting in 1902, much of the museum focuses on the development of this Presidio as a training base.

The final building that makes up the Monterey State Historic Park group is the Stevenson House & Museum. Over the years, this historic adobe building housed artists, writers, fisherman, and government officials. Its most famous resident was writer Robert Louis Stevenson.

At the time, it was a rooming house called the French Hotel. He lived here for a few months in 1879. During his stay in Monterey, he wrote "Old Pacific Capital". Today, you can visit the restored house and see several rooms dedicated to Stevenson.

Hours: Saturday afternoons, and the last Sunday of the month in the summer